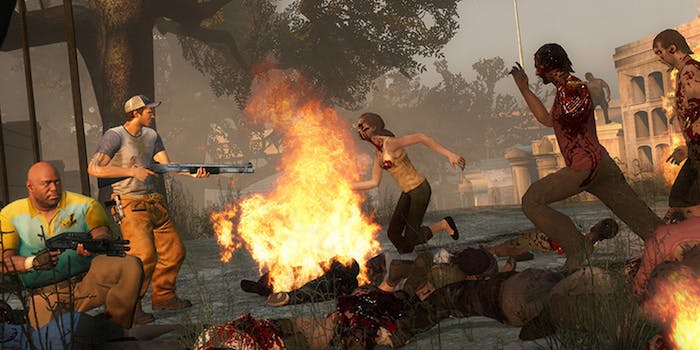 How do you kill zombies without spattering a little blood and brains?

You don’t—except in Australia, where gamers were faced with censored zombie kills for years in the only version of Left 4 Dead 2 their government allowed.

Left 4 Dead 2 is the story of four survivors of a zombie apocalypse, who are immune to whatever virus is causing the deaths and mutations of human beings. Players mow down thousands of zombies as they run their avatars between safe houses. That equates to a whole lot of blood and a whole lot of dead bodies all over the place.

All that carnage caused Left 4 Dead 2 to became one on long list of video games banned by the Australian government for excessive violence. The game had to be censored to remove the gore before it could be released.

But this week the government lifted the ban. Now Australian gamers can enjoy Left 4 Dead 2 in all its splatterfest glory.

The move comes along side relaxing censorship laws in Australia. Prior to 2013, the Australian media ratings for video games did not extend beyond MA15+, or “Mature, 15 years of age and up.” Anything deemed above that rating would be “refused classification,” which amounted to a ban on distribution. Games like Fallout 3 and Grand Theft Auto 3 were among those refused.

Some games, like Left 4 Dead 2, got past the ban through edited content. Fallout 3 removed references to drug use. Grand Theft Auto IV got rid of the hookers.

In 2011, Australia’s government began pushing for a new, R18+ rating, which was approved and enacted in January 2013. It was expected that this new, higher-level rating would allow previously banned games to be eligible for distribution.

On June 24, however, Saints Row IV was refused classification. The severity of video game censorship in Australia may have lessened, but the topic itself hasn’t gone anywhere.