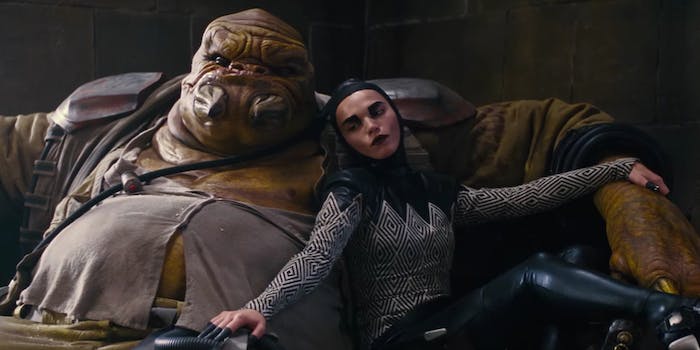 Does a ‘Star Wars’ tie-in book reveal a secret about Darth Vader’s helmet?

A possible answer to one of 'The Force Awakens' plot holes.

The 20 Star Wars books published before and after the release of The Force Awakens enhanced and expanded the universe and gave us more intel on the characters we loved on-screen. But is it possible that one of the books already filled one of The Force Awakens’s bigger plot holes?

During a moment of conflict, Kylo Ren looks for guidance from the melted helmet of Darth Vader.

“Show me again, Grandfather, and I will finish what you started,” Kylo says as the shot focuses on the melted mask, a scene we partially saw in one of the trailers.

But where did Kylo get that mask? We know he’s a Vader fanboy, so we weren’t too surprised he had it 30 years after the Battle of Endor. But how he managed to get his hands on the key relic of the Empire is never addressed.

Star Wars Minute speculates that we do have that answer, and it lies in one of the Journey to the Force Awakens tie-in books. We meet Bazine Netal in Delilah S. Dawson’s The Perfect Weapon, the mercenary who calls the First Order to Takodana after spotting Rey, Finn, Han Solo, and BB-8 in Maz Kanata’s fortress. In the book she’s hired by a client whose identity is never revealed to retrieve and deliver a package that is located in the house of a former stormtrooper who fought in the Battle of Endor.

We never learn anything about what’s in the box or the identity of Bazine’s client, but Star Wars Minute speculates that it was Kylo who hired her to retrieve Vader’s helmet. Although we may not find out the answer in the movies, it does fit. Kylo is obsessed with his grandfather’s work and flips out when he sees Finn—who he calls a traitor—wielding Luke Skywalker’s lightsaber, which belonged to Anakin before him. Plus, if he is actually communicating with Vader’s spirit having his helmet would likely help with that.

We just have one question: What other Darth Vader relics does Kylo have in his possession?