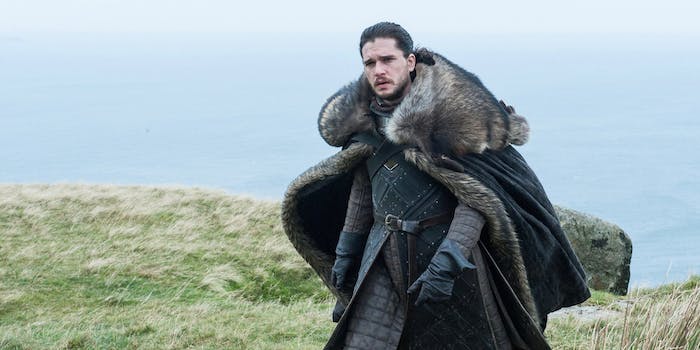 Jon Snow came face-to-face with Daenerys Targaryen and Drogon on Game of Thrones and earned respect and admiration from both of them. But behind-the-scenes Kit Harington had an even more amusing way to win them over.

Days after “Eastwatch” aired, Emilia Clarke shared a video of Kit Harington on the Game of Thrones set twirling and flapping his arms and it’s just as delightful as it sounds. He’s having a bit of fun in-between takes, but it could easily double as some kind of ancient dragon taming or mating ritual. Clarke invokes the words of Jon’s first love Ygritte as she captioned the video with #youknownothingjonsnow, among other things.

Not only is it a fun glimpse behind-the-scenes of Game of Thrones, it shows what went into shooting their meeting in the first place. Harington is positioned near the edge of a cliff with forceful winds blowing around him, and in Clarke’s video, you can see that he’s tethered to the ground with a cord so he doesn’t blow away. He’s embracing Jon’s hidden Targaryen side, but he and the crew made sure he didn’t turn into Kite Harington either. After all, he has a journey beyond the Wall to make.