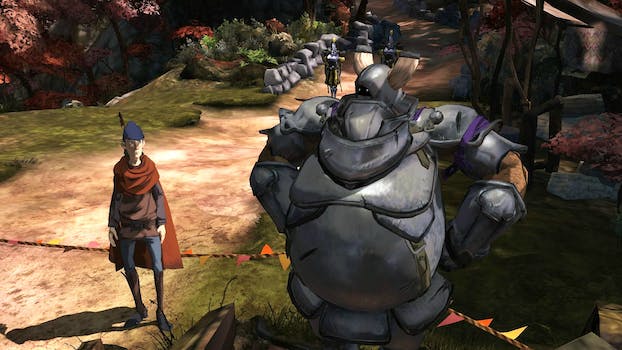 A first peek at the new King’s Quest game

We got a look at a live demo of the new 'King's Quest' game.

Last year we reported that the iconic King’s Quest would be making a comeback. When it was announced, the Internet went wild.

During this years Game Developers Conference, we were able to get a look at the new King’s Quest in action.

At the St. Regis hotel, about a block away from the San Francisco Moscone Center, the game’s creative director Matt Korba demoed the new King’s Quest for some select journalists.

The game takes on a very Princess Bride-style of narrative. King Graham, the hero from previous King’s Quest games, narrates his past adventures to his granddaughter, Gwendolyn.

As the player interacts with the game world, we hear the Graham explain each action as you play the game. For example, if the player decides to mess around in the game world and jump under some bedsheets, Graham will say that he felt tired and wanted to take a nap. It’s really an endearing premise, and one that has the charm of a classic Disney movie.

That charm is also coupled with a beautiful art style. The art looks like a more up-to-date version of Robin Hood. While taking that classic 1970s animated aesthetic, it’s blended with modern touches, like more dramatic shading and really awesome cape effects. It feels like a 3D realization of old hand-drawn animated films.

It wouldn’t be a King’s Quest game without exploration and puzzle solving.

The game wants you to experiment with its environment, and those interactions, according to Korba, will color the story. One sequence found our hero stuck in a cave with a giant chained dragon. Throwing water at the dragon will result in the narrator explaining that it was a gentle giant that’s trapped. Throwing a knife at it will change the narration to give it a more dangerous and heroic tone, making the dragon out to be a ferocious beast that must be dealt with swiftly. We can already see parents and kids going back and forth on how to handle certain predicaments, which will create an overall more immersive experience.

Any parent of a 7-year-old probably can’t count the number of times they’ve had to pop in the Blu-Ray for Frozen. Any popular animated movies can get pretty mind-numbing. King’s Quest can really be a great alternative. It’s a game with a family-friendly story, branching paths, and multiple midpoints and endings. Each playthrough could differ from the last, giving some much-needed reprieve to a parent who can’t stand the thought of hearing “Let it Go” one more time.

The first chapter of King’s Quest is slated to come out this fall for PS4, PS3, Xbox One, Xbox 360, and PC with subsequent chapters following in the later months.

Correction: A previous version of this story misspelled the name of creative director Matt Korba.