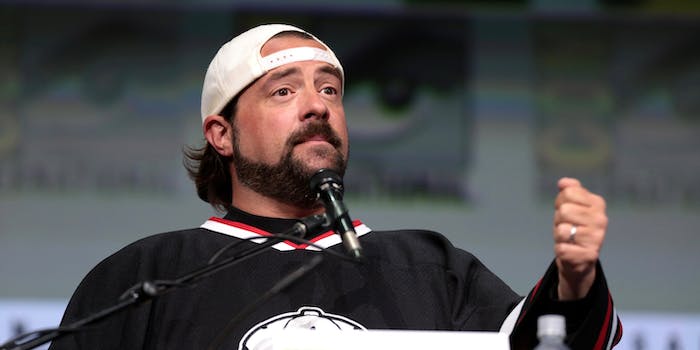 ‘If I hadn’t canceled the second show to go to the hospital, the Doc said I would’ve died tonight.’

Kevin Smith revealed early Monday morning that he had a “massive heart attack” after he started to feel ill following a standup comedy performance.

He posted a selfie of himself from his hospital bed and told his followers that he had “100% percent blockage” of his LAD artery (which Smith noted was sometimes called the “Widow-Maker”), and Smith said that his doctor told him that if he had waited to go to the hospital, he would have died.

After the first show this evening, I had a massive heart attack. The Doctor who saved my life told me I had 100% blockage of my LAD artery (aka “the Widow-Maker”). If I hadn’t canceled show 2 to go to the hospital, I would’ve died tonight. But for now, I’m still above ground! pic.twitter.com/M5gSnW9E5h

But in a longer post published on Facebook, Smith reflected on his life, the thoughts going through his head, and the contrasting feelings he experienced as he watched doctors insert a stent into his LAD artery. He noted that his dad died after suffering a massive heart attack, and despite believing that he would “die screaming,” he described feeling calm and content.

“But as I stared into the infinite, I realized I was relatively content,” Smith wrote. “Yes, I’d miss life as it moved on without me – and I was bummed we weren’t gonna get to make #jayandsilentbobreboot before I shuffled loose the mortal coil. But generally speaking, I was okay with the end, if this was gonna be it. I’ve gotten to do so many cool things and I’ve had so many adventures – how could I be shitty about finally paying the tab. But the good folks at the Glendale hospital had other plans and the expertise to mend me.”

I was trying to do a killer standup special this evening but I might’ve gone too far. After the first show, I felt kinda…