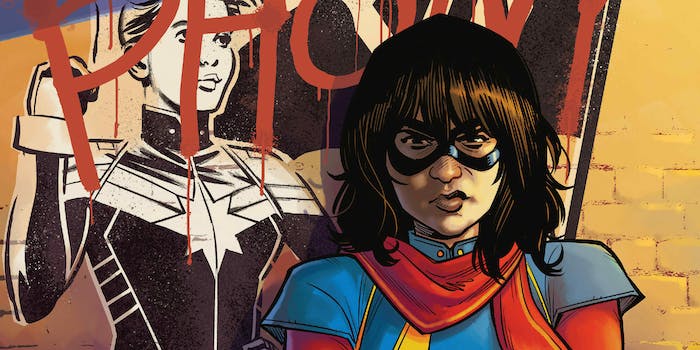 Ms. Marvel could get a movie sooner than we thought.

MCU producer Kevin Feige is a master of the no-comment comment.

His interviews are often hypnotizingly vague, avoiding even the tiniest hints about future Marvel franchises. So when he actually mentions a character by name, that means something. In this case, we’re talking about Kamala Khan, aka Ms. Marvel.

Kamala Khan is one of the most popular new Marvel characters of the past decade, a Pakistani-American teen who adopts the superhero name Ms. Marvel after Carol Danvers becomes Captain Marvel. Fans have long wondered when she’ll get a screen adaptation, and it may finally be happening.

In a new interview with the BBC, Feige said, “Captain Marvel’s shooting right now with Brie Larson. Ms. Marvel, which is another character in the comic books, the Muslim hero who is inspired by Captain Marvel, is definitely sort of in the works. We have plans for that once we’ve introduced Captain Marvel to the world.”

Now, “definitely sort of” is a classic kind of Feige-ism. But “we have plans” is a lot more concrete. It’s certainly more specific than the many times he danced around the question of introducing a female-led franchise, saying he “believed in” the concept of female heroes without, you know, actually confirming anything. By singling out Kamala Khan by name, he makes it clear that she is a realistic priority.

This interview suggests that Kamala Khan could make her debut in Captain Marvel 2, or potentially in a solo spinoff before then. It’s easy to imagine her having a mentor/student relationship with Carol Danvers, like Peter Parker and Tony Stark in Spider-Man: Homecoming. It also makes sense for Feige to mention her now because the MCU is expected to change drastically after Avengers 4.

At the moment, Marvel is keeping a tight lid on its upcoming release schedule. While we know we’ll see sequels to Black Panther, Spider-Man, and Guardians of the Galaxy, everything else is a mystery. We don’t know how many of the original Avengers will survive Avengers 4. We don’t know if that Black Widow movie will actually happen. We don’t know what new franchises will be introduced after 2019. So along with more obscure titles like The Eternals, Ms. Marvel is an obvious choice for the next phase.