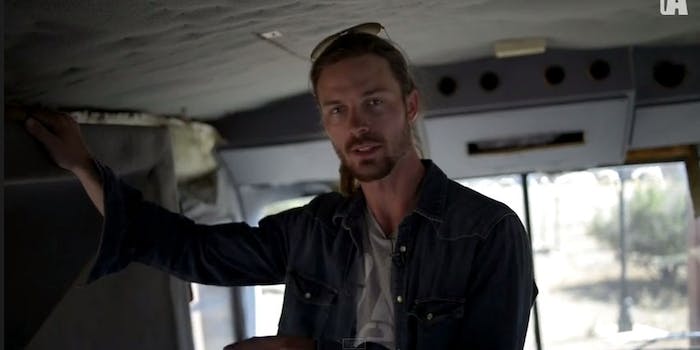 Fans are bringing this ‘Jurassic Park’ RV back to life

Six years on a California studio lot did a lot of damage.

Admit it: if you had the opportunity—and money—you would gladly buy and live in the screen-used RV from Jurassic Park: The Lost World. That’s exactly what Swiss resident Franck Galiègue had in mind when he managed to purchase the vehicle.

Unfortunately, the RV has been attacked by a force far worse than CGI dinosaurs: the southern California elements. It’s been sitting on a lot in Santa Clarita in disrepair for the past six years. Its interior is long gone, replaced with thick layers of dust and rat droppings.

Fortunately, Galiègue didn’t turn to his local auto body shop for help with the restoration process. He called in the all-too-real fan outfit the Jurassic Park Motorpool (with help from StarCarsCentral).

Christopher Rutkowski, host of the movie cars series theAFICIONAUTO, takes YouTube viewers on a brief tour of the RV as it appears today, showing off its faded paint job, disgusting original mattresses, and even spray-painted PVC pipe that acted as steel caging in the movie.

And, because the RV was little more than a compact location in the film, most of the vehicle is held together by large pieces of wood rather than steel.

Yes, the Jurassic Park Motorpool certainly has a Brontosaurus-sized workload ahead of them if they hope to restore the RV to the glory seen in Jurassic Park: The Lost World.

Let’s just hope that no rattlesnakes—or Tyrannosaurus Rexes—impede their progress during the restoration.