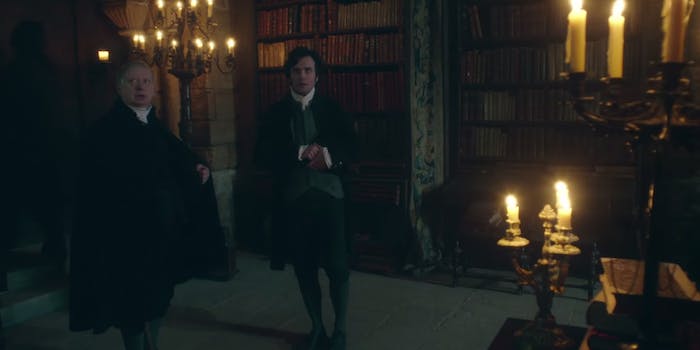 Meet Mr. Norrell in this new clip from the BBC.

The BBC’s adaptation of Jonathan Strange and Mr Norrell finally has a premiere date: May 17 on BBC One and June 13 on BBC America.

The historical fantasy miniseries follows its two protagonists as they bring magic back to 19th-century England. In this new clip, we meet the curmudgeonly Mr. Norrell for the first time. He is the first practicing magician in centuries, but his visitors are shocked to discover that he’s more interested in his book collection than showing his powers to the outside world.

This scene is a relatively subdued example from a show that will later introduce murderous fairy royals, undead brides, and the Napoleonic war.

We love seeing Childermass, the man who greets Segundus and Honeyfoot at the door. As Mr. Norrell’s servant he’s meant to remain in the background, but this scene indicates he’ll be taking more of a Greek chorus role in the story, smirking wryly from somewhere in the shadows behind the oblivious Mr Norrell.