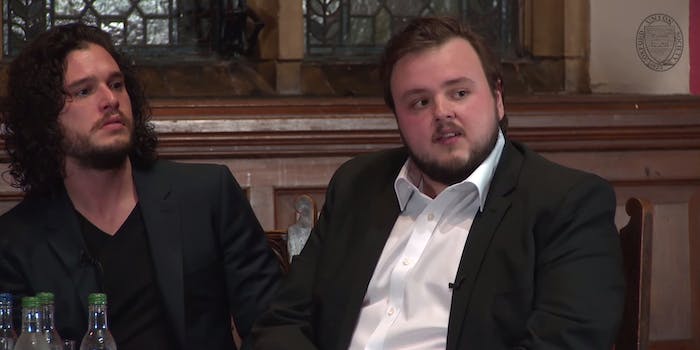 Could this month-old ‘Game of Thrones’ interview hint at what happens to Jon Snow?

Did one of the more popular Jon Snow theories get confirmed months ago?

As the Internet cools off their speculation over Kit Harington’s hair at Wimbledon and whether his everyday life is or isn’t a spoiler, a new theory has emerged from an interview that took place before the fifth season of Game of Thrones began.

For that we go back to the Oxford Union talk with showrunners David Benioff and Dan Weiss, John Bradley (who plays Samwell Tarly), and Harington from March. At the time, the talk made headlines because the showrunners revealed that the show may eventually spoil the books. Many of the people who read that story may have skipped the talk entirely (possibly intimidated by the video’s runtime of 75 minutes).

But by doing that, a potential key into Jon Snow’s fate may have been overlooked by parts of the fandom well before they had any reason to worry about him.

At approximately the 20:36 mark, one student asked the panelists which Game of Thrones characters they would want to be. Bradley responded with well-thought-out reasoning for Varys, but Harington said he’d want to be something that, at least in the books, his character already is.

When taken at face value, Weiss’s response might seem like some sort of hint that Jon might make it out of his mutiny at the hands of the Night’s Watch in the “Mother’s Mercy” episode alive. His eyes might not transform as if he’s warging or turning into a White Walker or a wight, but his death stare and Harington’s confirmation that he’s not coming back next year aren’t enough to convince fans Jon’s really dead.

Weiss likely knows about the “Jon wargs into Ghost” theory, and aside from filming the scene before the Oxford Union talk, Harington has read the books and may be aware of it as well. It might’ve been a nod to the book fans.

However, context is key, and given the full scene in which Harington and Weiss’s quotes take place, that confirmation doesn’t seem as likely.

After Harington says he’d like to “put [himself] into a wolf,” the entire room bursts into laughter—Harington included—because he accidentally made a bestiality joke.

“We should just stop now,” Benioff said. “It’s not gonna get any better than this.”

It’s then that Weiss says his quote about season 6—which appears to be not in response to Harington wanting to be a warg, but as a play on the joke.

Another piece of evidence may have been struck down, but it’s times like these that fans can cling to Sam’s ever-telling quote of “He always comes back” about Jon more than ever.

And if Jon truly is dead in the show, there’s always the books—maybe.