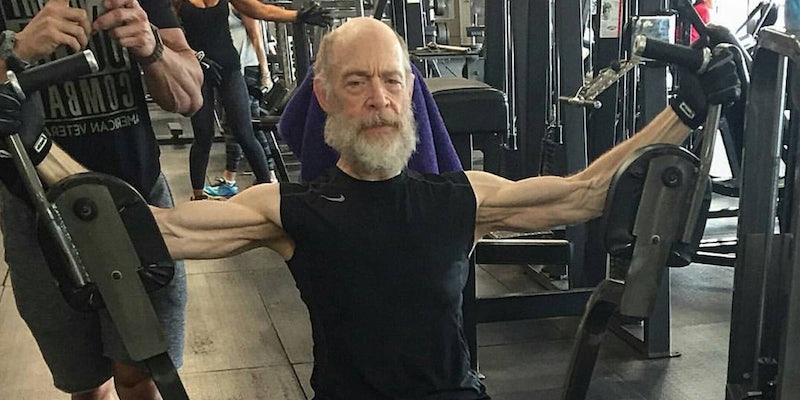 Actor J.K. Simmons has gone through an astonishing transformation since the last time you saw him onscreen. Judging by some new photos posted on social media, he’s become shockingly ripped.

While it’s possible that Simmons simply decided to spend more time at the gym, it’s more likely that he’s training for his role as Commissioner Gordon in Justice League.

Every time we train together I forget he’s 61 years old. So much respect for this guy. #JKSimmons #OldManCranking

The Batman v Superman sequel began filming in April, and Simmons already said that he’d be arriving on set in June. However, no one was expecting him to follow in Ben Affleck‘s footsteps and put on this much muscle for the role.

While Simmons’ Oscar-winning turn in Whiplash did require him to work out, that was nowhere near as intense as doing weight training with a former U.S. marine.

Saturday morning, 61 years old & making the young generation jealous. This is what dedication looks like. #JKSimmons

If Gordon is really going to look like this in Justice League, then it’s an entertainingly on-brand choice from director Zack Snyder. After the eye-poppingly muscular warriors of 300, and Bruce Wayne’s gratuitous workout scene in Batman v Superman, it’s clear that Snyder prefers his action heroes to look like they spend at least three hours in the gym every day. And apparently, that now includes Gotham City’s 60-something police commissioner.