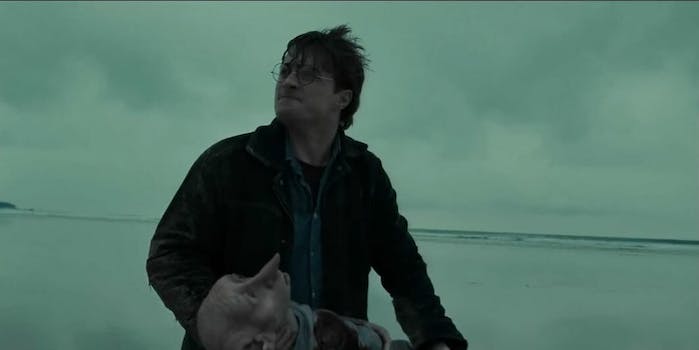 J.K. Rowling commemorates the Battle of Hogwarts by apologizing for Dobby’s death

This is how she always celebrates the Battle of Hogwarts.

On each anniversary of the Battle of Hogwarts, J.K. Rowling celebrates the same way. She apologizes for killing off one of your favorite Harry Potter characters.

May 2 marks the 20th anniversary, and Rowling is apologizing again—but not for a death that happened on Hogwarts grounds during the battle. Instead, she commemorates Dobby the house elf, a beloved character who died rescuing Harry and company from Death Eaters.

It's that anniversary again. This year, I apologise for killing someone who didn't die during the #BattleofHogwarts, but who laid down his life to save the people who'd win it. I refer, of course, to Dobby the house elf.

The scene is still heart-wrenching. Harry cradles Dobby on a beach and begs Hermione to help save him—but there’s nothing any of them can do. You can relive the moment (if you don’t mind openly sobbing) with the video below.

Back in 2017, Rowling picked a surprising choice of character: Severus Snape.

OK, here it is. Please don't start flame wars over it, but this year I'd like to apologise for killing (whispers)… Snape. *runs for cover*

Rowling was right to warn about flame wars, because Snape is one of the most hotly debated characters in the series. However, most of that debate was about his moral ambiguity, rather than her decision to kill him off. She’s discussed the topic before, tying into Harry’s decision to name his son Albus Severus, despite the years when Snape made his life hell at Hogwarts.

Snape died for Harry out of love for Lily. Harry paid him tribute in forgiveness and gratitude. https://t.co/MPXBgUApa3

In the world of Harry Potter character deaths, 2016’s apology was actually more controversial. Rowling confessed that she didn’t originally plan to kill off Remus Lupin, and only made the decision because it felt more poignant than killing Arthur Weasley.

Lupin is still one of the most upsetting character deaths for many fans, partly because it felt less narratively necessary than “big” deaths like Sirius, Snape, and Dumbledore. Worse, fans mourned the fact that Rowling killed both Lupin and Nymphadora  Tonks, leaving their infant son without a parent. But in a similar vein to Snape’s character arc, there’s an argument that Lupin’s death concluded an ultimately tragic story.