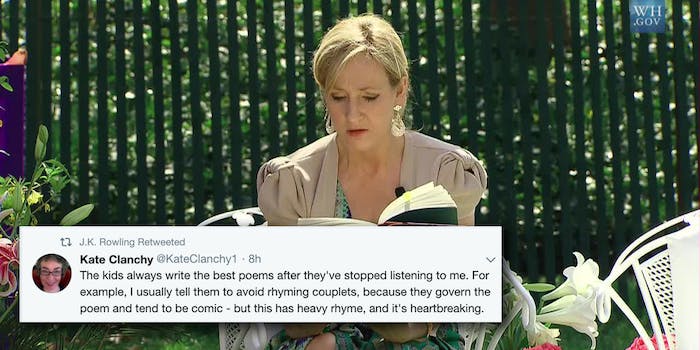 The poem has now been seen by thousands.

While many teens spend their formative years reading the work of J.K. Rowling, one teenager has the bragging rights to say the literary hero read his work instead.

“The kids always write the best poems after they’ve stopped listening to me,” she wrote. “For example, I usually tell them to avoid rhyming couplets because they govern the poem and tend to be comic — but this has heavy rhyme, and it’s heartbreaking.”

Louis wrote a heart-wrenching poem about his absent father, called “When I Was A Kid I Waited.”

The kids always write the best poems after they've stopped listening to me. For example, I usually tell them to avoid rhyming couplets, because they govern the poem and tend to be comic – but this has heavy rhyme, and it's heartbreaking. pic.twitter.com/dayMTBRUZi

Rowling retweeted the poem to her millions of followers, which helped it go viral. It received more than 1,300 retweets and 6,600 likes along with dozens of comments from strangers who could relate to Louis’ poem.

Not only is this well written, but the truth of it probably resonates with many, many children and adults. When those two elements combine, that makes the written word becomes powerful.

Very emotional. If I've learnt one thing it's that kids have great ideas! Allow them the freedom to get creative and they usually do.. they're much less worried about breaking rules than us adults!

Clanchy told Mashable that Louis wrote the poem during a number of workshops he attended for disadvantaged children in his year. She said Louis is “a bit surprised” by the huge response to his work but was happy to learn that he had become famous—even if only for just a day.