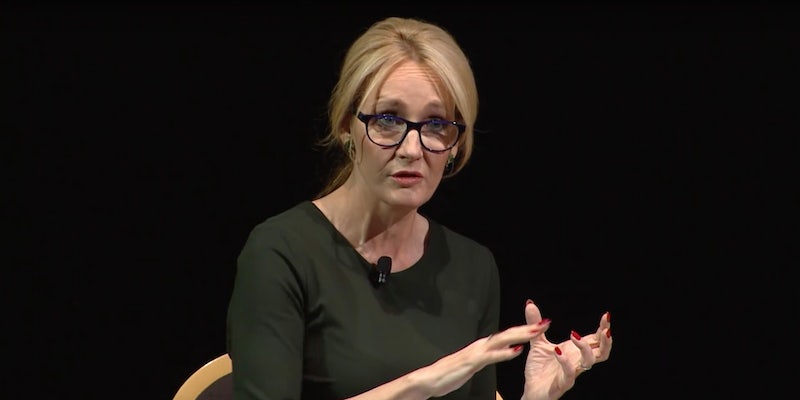 J.K. Rowling’s Twitter feud with Piers Morgan has captured the internet’s attention for the past few days, but she demonstrates just how good at trolling she’s gotten after baiting Morgan with his own words.

On Valentine’s Day she shared a screenshot from an article that didn’t appear to be recent based on Rowling’s listed age at the time. (She’s 51 now). The blurb was complimentary and said that while she doesn’t play the “celebrity game” she’s still a rather important figure.

“[B]y encouraging children to read, feel inspired and be creative, she has had a greater impact on the world than most of the other names on it.”

Just been sent this! Could the writer let me know who he is? I'd love to thank him! #Valentines pic.twitter.com/OQtbxPD6AL

Morgan, who has used Tweetdeck to keep tabs on what people are saying about him in the past, quickly called bullshit and retorted that Rowling was a hypocrite.

What Morgan didn’t appear to realize at the time—but others, including BuzzFeed’s Jamie Ross, noticed—was that Rowling shared a snippet of a glowing 2010 write-up from none other than Morgan himself.

On top of this blow, Morgan has already been called out on Twitter for liberally quoting from Harry Potter after claiming he’s never read it, and an independent bookstore is tweeting the series at him. (As of press time, Big Green Bookshop has reached Sorcerer’s Stone’s third chapter.) One of Morgan’s sons is also a huge Harry Potter fan, which Morgan has called “My biggest failure in 23 years of parenting.”

Instead of admitting defeat, Morgan doubled down and claimed that he actually knew he wrote the clip Rowling posted to Twitter. Rowling hasn’t responded yet, but she might be biding her time.

Relax, quarter-wit, I knew what it was. Just surprised I put her as high as 97th. https://t.co/HCzx4Ius4E

He then repeatedly shared a poll that stated more people preferred Rowling than him, noting, “Who wants to win the popular vote these days, anyway?”