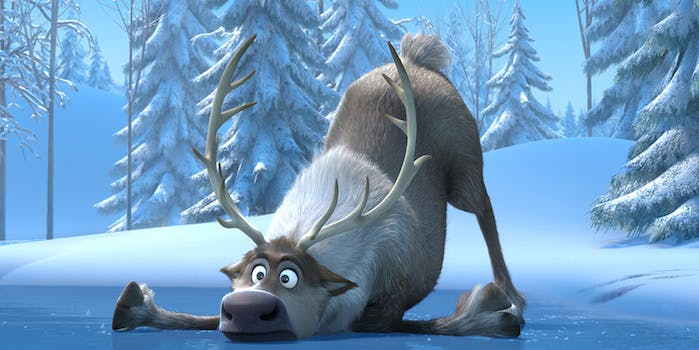 Woman seeks divorce because her husband didn’t like ‘Frozen’

Guess there's no thawing the hearts of these two lovebirds.

It looks like someone just can’t agree to let it go regarding her husband’s dislike of her favorite movie.

One Frozen fan is allegedly so enraged over her husband’s inability to understand what she loves about the film that she’s filing for divorce.

The Japanese blog and forum Kikonsha no Hakaba, or the aptly named Marriage Graveyard, got a shock last week when one of its readers, a 31-year-old husband, revealed that the Disney blockbuster had upended his otherwise stable marriage.

Culture blog RocketNews24 conveyed the man’s befuddlement. The man, who was not named, should have been primed to enjoy the movie: After all, he was a student of Danish literature, which gave life to Frozen‘s inspiration, Hans Christian Andersen’s tale of the Snow Queen. His literary degree garnered him an annual salary of 11 million yen—equivalent to a tidy six figures in U.S. dollars. This let him lead a comfortable, debt-free lifestyle and enabled his 29-year-old wife to live on his salary.

And thus it had been for the duration of their six-year-marriage, until he uttered the fateful words:

“It’s an OK movie, I guess, but I didn’t really care for it personally… Do you really think it’s that good?”

His wife was reportedly so blindsided by his opinion that she retorted, “If you can’t understand what makes this movie great, there’s something wrong with you as a human being!”

In all fairness, we agree with the wife. Whatever Frozen‘s flaws—its lack of ethnic minorities, the careful crafting of thousands of unique snowflakes while its animators defend their inexplicable inability to make women’s faces look distinguishable from one another—it holds an important place as one of the only major box office hits to focus solely on women, with a plot driven solely by two female characters with agency. If her husband can’t see how important that is, then we don’t blame her for getting angry.

Still, her reaction seems a little… how can we put this?… icy. After a fight over the movie, she allegedly demanded a divorce, and then went to stay with her parents, where she had been living for a week at the time her beleaguered husband turned to Kikonsha no Hakaba for advice.

The denizens of the Marriage Graveyard were unsurprisingly harsh, advising the husband to take the divorce and flee or to hire a private investigator to find out what the real motivation behind the wife’s sudden need for a divorce was.

While we can’t blame them for being suspicious, the man made no mention of any other marital tensions he and his wife were having. It’s apparently all down to their incompatible desires.

Maybe some people just weren’t meant to build snowmen together.