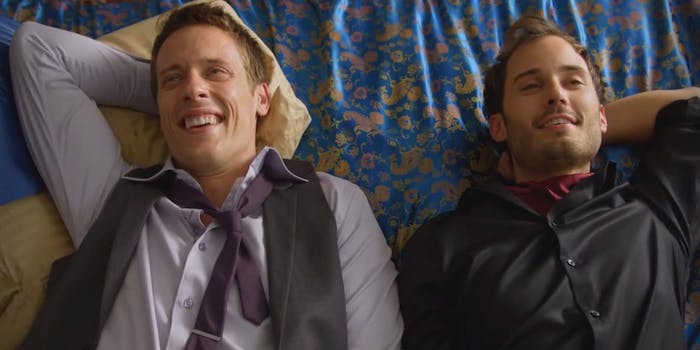 Plus, "a full-scale invasion has always been on Husbands' big gay agenda."

In 2011, a webseries called Husbands premiered on the scene, making a major impact on the landscape of independently made online programming. Following a gay couple as they deal with accidentally getting married and deciding to stay married so as not to hurt the marriage equality cause, the show addressed important cultural issues while never losing its humor. It received numerous awards and critical acclaim for how it cleverly added a twist to the newlywed sitcom format. Three years later, it’s still making people laugh and think as it moves from airing on platforms like YouTube to a major network’s digital studio.

From the start, series creators, writers, and executive producers Jane Espenson and Brad Bell had confidence the show would be a success. Bell, who stars in the show as Cheeks and acts as showrunner, told the Daily Dot he was certain a Husbands audience was out there, and that audience is the entire reason they made the show.

“That audience started with Jane and me, really, because we made the show we wanted to see. And I just had this feeling, like when you see a midnight screening and think, ‘This is going to be huge,’” Bell said. “The world was more than ready. It’s as if they were already missing the show, before it was ever made.”

Espenson, a veteran TV writer known for her work on hit shows Buffy the Vampire Slayer and Once Upon a Time among others, agreed that the time was right for the series and said they totally imagined it could take off.

“I remember saying, ‘If we don’t do this, in five years there will be a show on NBC called Husbands that will be this show, but I think we can do it better. Let’s get a jump on it because we’re five years ahead of the curve,’ and that was in 2011,” she said. “Here we are coming up and things happened faster than anybody anticipated. Instead of five years, it’s three years and we’ve grown and we’re a part of the CW family, and we’re gonna make more.”

Season 3 ended in October, and while they’ve produced no new content since then, Espenson feels the show has still been catching fire this year. This season was the first created in partnership with CW’s digital-only studio CW Seed. After their agent mentioned to the pair that CW was looking for a comedy, they set up a meeting and discovered the executives were already fans.

“They knew character names and had favorite lines. It was pretty surreal,” Bell said. “I went in thinking we were going to have about four and a half seconds to either capture their attention or flop, since that’s more the norm when you’re pitching. But instead, they knew the show, and they got the show. They were basically like, ‘We love what you do. Keep doing that. That’s your note.’ No part of the process was changed by working with them, which allowed us to be even more on top of our game creatively, because there wasn’t anyone standing over our shoulders.”

Before moving to CW Seed, the show had turned to Kickstarter for help developing season 2. The experience was so positive Espenson said she’d use it again. One of the things she thought was great about the campaign was how easy it made it to find out who their fans are; it’s clear the audience they reach through the series is important to both creators.

Male and female, gay and straight, and old and young alike seem able to relate to Husbands, and the fans tell the creators as much online and in-person at events such as San Diego Comic-Con. Espenson said they’ve even had couples come up to them and admit to being born-again Christians and loving the show, despite the apparent contradiction. When this happens, she sees directly affect her fellow creator.

“Something [Bell] strongly believes in is that there are bridges to be made, that people get so passionate about something they put up walls where they don’t have to be. You can find allies in unexpected places,” Espenson told the Daily Dot. “Just working with him and thinking with him about that has made me realize some of the things we do inadvertently, such as when we do put so much emphasis on ‘the women of sci-fi’ as opposed to just saying ‘the great minds of sci-fi and look how many of them are women,’ I think there’s a slightly different message there. I hope we don’t end up in a ‘women versus men’ or ‘gay versus straight’ or ‘Christian versus atheist’ situation all the time. It should be that everybody benefits.”

They hope to continue building these bridges with the series as they enter season 4, which is currently in the writing stage according to Espenson. It may have been a while since fans got their Husbands fix, but they have a lot to look forward to next season as the creators try to touch on a variety of storylines, from romantic to political to current events. Of course they’ll also always include the distinct voice of Bell’s character Cheeks and get back to the question of whether the love is enough to carry these two accidental newlyweds through it all.

@OutlawQueenSet Yes — @TeamHusbands is on a new schedule this year. But hang on!

While there have been calls for Husbands to finally make the transition to TV, for now it looks like anyone who wants to watch season 4 will have to keep their eyes on CW Seed. Still, there just might be a lot more on the horizon for fans to look forward to if Bell’s comments about season 4 are any indication:

“I can’t say much, which often gets me accused of being a tease. But seriously, I legally can’t say anything. In fact, I’ve already said too much! But I’ll say just this much more… There are still some details to figure out, but a full-scale invasion has always been on Husbands‘ big gay agenda,” he said. “I have a feeling that this time next year, we might just be inescapable.”