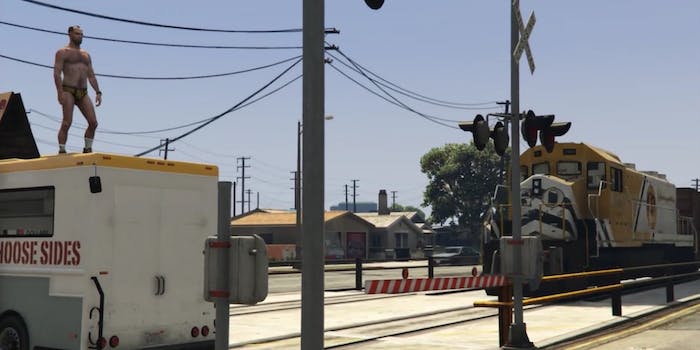 Please do try this at virtual home.

Trevor Philips, one of the stars of Grand Theft Auto V, is a lunatic. He also makes for a great star on GTA V’s version of Jackass.

Invincibility mods are some of the most common mods you’ll find for any PC game. Running around in a video game without fear of being injured can take a lot of fun out of the game, unless invincibility is applied to something a little more creative—like filming your own version of the insane stunt show Jackass, in the city of Los Santos in GTA V.

See Trevor Philips attempt classic Jackass-style golf cart jumps, challenge city buses and street lamps in tests of will, and take on mountain lions, all of which would make Johnny Knoxville and gang proud.

Those virtual stunts are small potatoes compared to what someone could do with extreme stunts in Grand Theft Auto V. We await the raising of the bar by YouTube’s GTA V community.