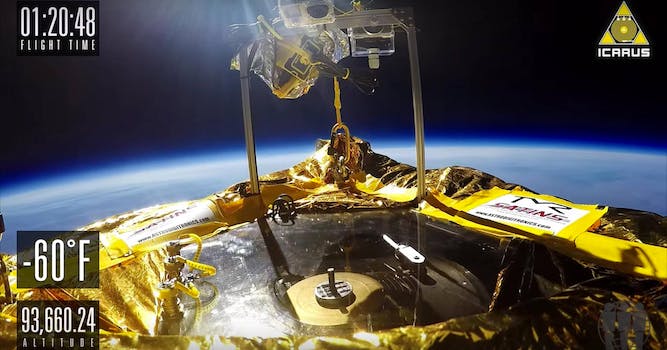 Just because he can.

Well, make that near space. Sound waves don’t travel in space and all, space travel is expensive, yadda yadda.

The company enlisted the help of Kevin Carrico to design and engineer the craft, which looks vaguely like the triforce from Legend of Zelda, with a golden record placed in the middle. Their song of choice? The 2010 remix of Carl Sagan’s “A Glorious Dawn,” naturally.

The craft, called the Icarus Craft, is something of a feat of engineering. It had to be able to withstand an ascent of nearly 100,000 feet via weather balloon to the “near space” zone. It also had to withstand the ensuing descent after the balloon popped. A parachute slowed the fall, but Third Man Records reported that it fell nearly four times faster than its ascent.

It took three years to test and built the craft. They had to make sure it was durable, that it could play even through turbulence, and that the record itself wouldn’t melt. To do that, they encased the record in gold and designed the turntable to be a heat sink, protecting the vinyl itself from melting.

The whole affair was a resounding success. Watch a five-minute abridged video:

Or if you’re a really die-hard fan, watch the entire one hour, 20 minute flight: