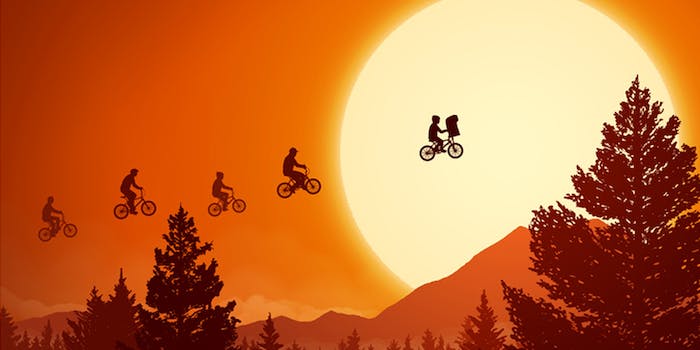 Inside the beautiful and ruthless world of Mondo poster collecting

Mike Kitchen carries an arsenal of poster tubes attached to a strap on his shoulder. He’ll need all four to ferry his precious cargo back to Chicago. It’s clear this isn’t his first rodeo.

The same goes for his friends, people meeting in person for the first time after bonding over their love of pop art in an online collectors group. They met up in Austin, Texas, for the first-ever MondoCon, and now they’re huddled in a corner of an exhibition room to chat about their take for the weekend.

All around them hang character portraits, movie posters, and other images drawn from popular culture. A Stay Puft Marshmallow Man leers down at them from a nearby booth. Kitchen says he mostly collects posters for his son, but it’s clear he’s having the time of his life.

Typically, movie posters are one thing only—an advertisement. They’re a marketing tool to get an audience excited about a mediocre movie they probably don’t want to see. Prints by Mondo, a gallery and online store, on the other hand, exist on an entirely different plane. They reflect the heart of popular film and television, tapping into the depth and moods of the stories and characters. If you love film, it’s not hard to see Mondos as a visual expression of that passion. Plus, they just look damn cool on your living room wall.

It only makes sense that these prints are created and curated by people who have the same fanaticism for pop culture as Mondo fans.

It all goes back to the Alamo Drafthouse movie theaters in Austin. Back in 1997, the independent theater chain began as a single screen on Colorado Street. Its founders, Tim and Karrie League, are so deeply committed to the cinematic experience that the theaters enforce a strict no talking, no texting, no latecomers policy (to the great appreciation of other film fans).

Early on, the theater started commissioning small runs of posters for special screenings. That effort expanded into the Mondo Tees T-shirt shop in 2004, but it only took a few years for the posters to eclipse the shirts in popularity. You can see the evolution of Mondo’s posters in the archives of its website.

Here are an early few created for the Alamo Drafthouse’s 2004 Cinemania! events: 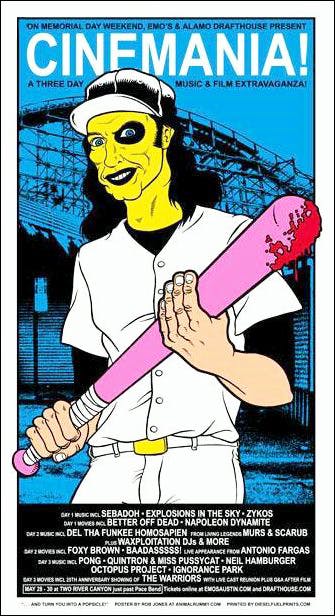 By Rob Jones, courtesy of Mondo 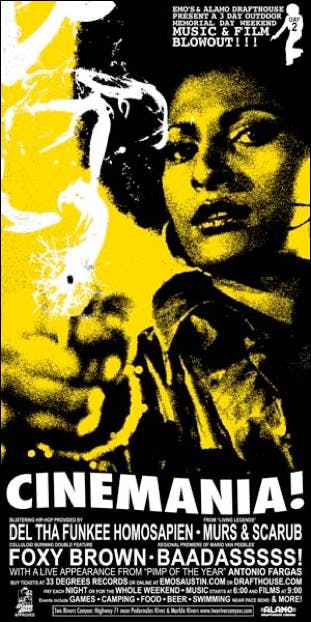 By Rob Jones, courtesy of Mondo

It’s when Justin Ishmael entered the picture that things really started to take off. Ishmael’s interest in collecting 35 mm film prints led him from film school in Kansas to the front doors of the Alamo Drafthouse. He hit it off with Tim League and worked his way into the Mondo offshoot of the business, where he forged new trails securing rights to the popular franchises that would put Mondo on the map. It took a while to get studios to see Mondo’s vision, but fans instantly fell in love with the business’s knack for getting talented artists to reimagine movie art.

Ten years after that early Cinemania! run, Ishmael and Mondo’s other creative directors are standing on the stage at MondoCon, surrounded by hundreds of pop art fans and cinephiles. The two-day event is the culmination of a lot of things for Mondo. The business is diversifying into vinyl soundtracks and high-end toys. It’s a chance to celebrate the artists and their process. And perhaps most importantly, it’s a gift to a rabidly dedicated fanbase that jumps through all the hoops necessary to be a Mondo fan.

How to buy a Mondo

Appreciating Mondos and actually getting your hands on one are two different things. Part of the appeal of the prints is their exclusivity. You’re competing against thousands of potential buyers to nab one of maybe 50, 100, or 200 prints.

Most of the posters are priced between $45 and $100, making them an affordable luxury for most people. You can snag prints when they’re posted online, but many runs sell out in a matter of minutes—especially those that are particularly desirable.

If you’re lucky enough to live in or be visiting Austin when a show opens, you can also buy prints right at the gallery—an unmarked storefront in the middle of an unremarkable plaza next to a gym and an Italian restaurant.

But don’t think you’re just going to waltz in on opening day and buy out the show. Every gallery opening is accompanied by a wait just to get in the door, and the more popular the show, the longer the wait.

Back in March, while throngs of music lovers and Polo-clad startup hopefuls crowded the streets of downtown Austin for South by Southwest, a line snaked for blocks outside the Mondo gallery. This was Mondo’s highly anticipated Disney show, and fans slouched in camp chairs for days waiting to get in. They’d have neighbors in line save their spots when they needed to grab a quick meal or take a bathroom break. 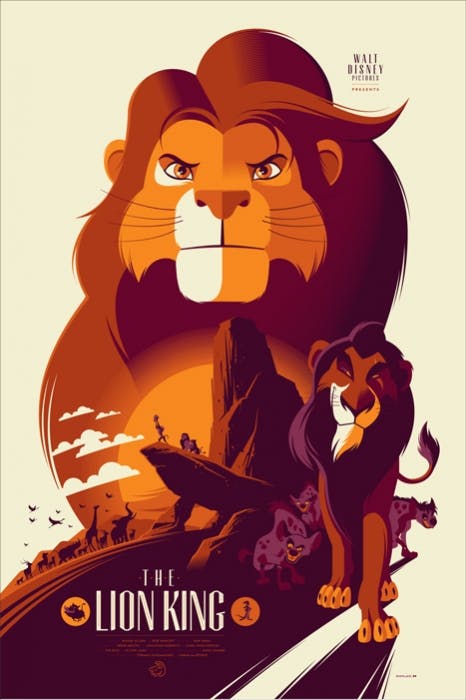 By Tom Whalen, courtesy of Mondo

Luis Marquez, a San Marcos, Texas, resident, said the longest he’s waited in a line is two days. But he’s not just on a mission to buy prints for himself.

Marquez is a member of The Peanut Gallery, a private Facebook group formed around collecting pop art. The members buy and trade prints and original art within the group, but they also bond over helping one another out. Kitchen, the guy with the arsenal of poster tubes, is member of the group. 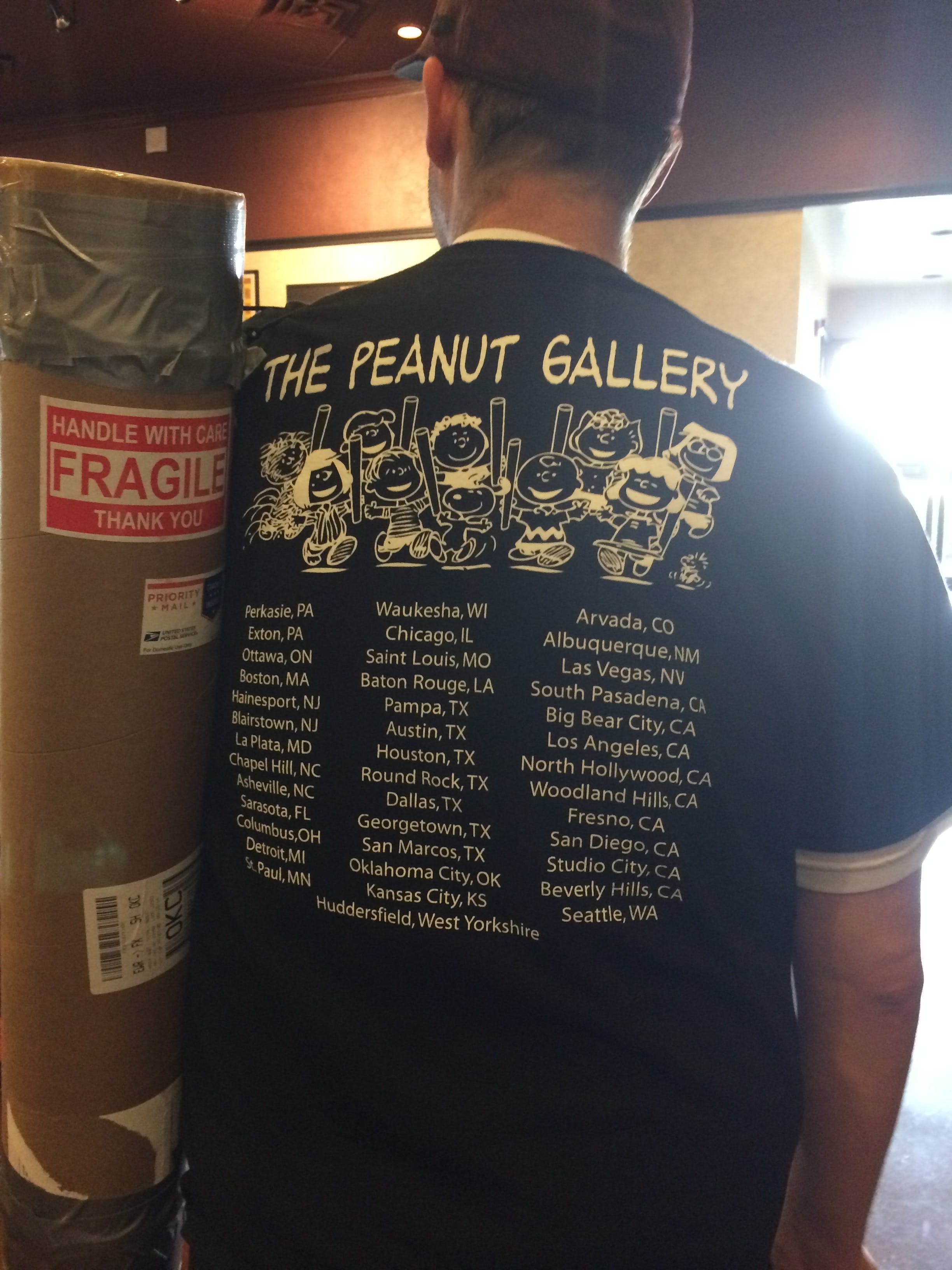 Marquez can ask friends for a hookup when they go to Gallery 1988 in New York or San Diego Comic-Con. And in turn, when Marquez heads to a gallery opening at Mondo, members of the group Paypal him cash and give him a list of the pieces they want. Marquez then rounds up friends who can go with him to make the purchases.

Mondo limits print sales to one per person to prevent a single buyer from going in and cleaning out an entire show. It’d be all too easy to resell the prints online at a healthy profit.

While that helps to level the playing field, there’s still a vibrant online market for Mondo posters. On a good day, posters go for double—even triple—the original price. Older, rarer Mondos and those signed by artists and celebrities can fetch even higher prices. 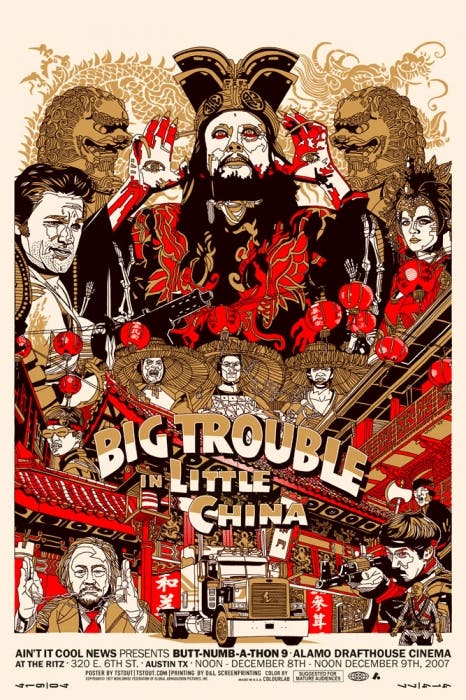 By Tyler Stout, courtesy of Mondo

While there are profiteers who buy one of every print in a show to flip online, a lot of the trade is actually among the collectors.

“You use one print to leverage another print,” Marquez said. For example, he has a friend who recently liquidated five posters to buy a $1,200 Star Wars print.

Marquez, meanwhile, grinned like the Cheshire Cat in a corner of MondoCon as he revealed that just that day he traded a new Back to the Future III poster for a Laurent Durieux print of Peter Pan and Wendy on wood. Marquez, like many of the collectors, can rattle going rates off the top of his head. He says the wood print—one of only five—is worth $500 to $600.

Of course when you’re walking into a negotiation, it pays to know how prints are valued. Most collectors get that information from a website called expressobeans.com, which has handy community-curated charts tracking the resale prices for prints from Mondo and other popular galleries.

Remember that Big Trouble in Little China print on eBay? Well according to its sales history on expressobeans, the average price in the last six months is about $1,400, and the highest sales price is listed at $2,025. If you’re serious about adding it to your collection, there seems to be room to haggle.

Expressobeans is also valuable for keeping wishlists of pieces you want to buy, finding people offering trades, and for chatting with other collectors. As The Peanut Gallery illustrates, those relationships can come in handy.

How to make a Mondo

While exclusivity certainly plays a part in driving the demand for Mondo posters, the subject matter and the artist’s vision are what matter most. If you’re already a huge fan of Captain America, seeing this beauty will make you stop dead in your tracks. 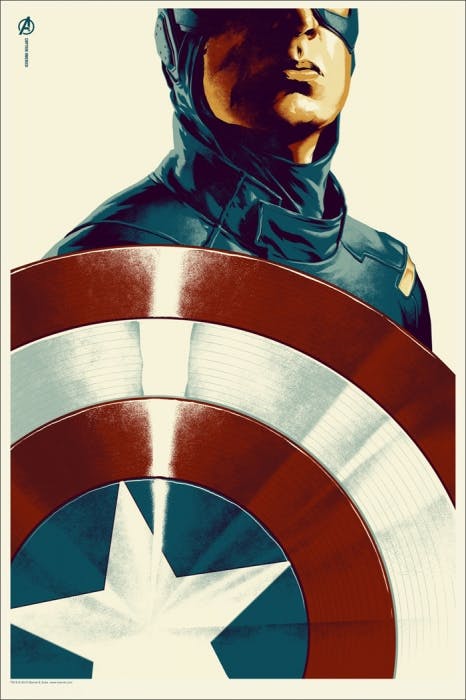 You have to have it, right? While Mondo certainly hits popular and contemporary franchises and characters, it earns additional love by passionately diving deeper into genre film and cinema history. You can pick up a Captain America poster at the mall (albeit, not a very inspiring one). But where else are you going to find a stunning tribute to Metropolis:

By Ken Taylor, courtesy of Mondo

Or the creeptastic Basket Case? 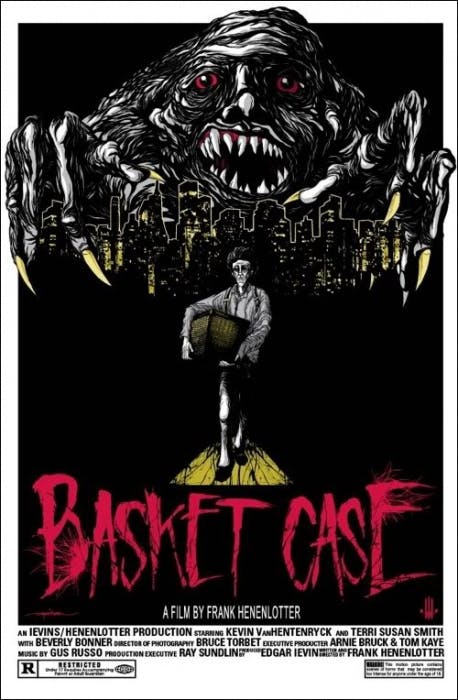 By Alex Pardee, courtesy of Mondo

Ishmael and fellow creative directors Rob Jones and Mitch Putnam discussed the process of how an idea becomes a Mondo in the last panel at MondoCon on Sunday. This probably shouldn’t come as a surprise: It’s not easy.

So many things—the license, permission to use an actor’s likeness, signoffs from everyone in the credit block, etc.—have to come together.

Take, for example, a poster that never happened: Marlon Brando in The Godfather. The poster was finished, awaiting approval. It’s a bold portrait of Brando in black and white and red.

“It’s fucking great, the only problem is the licensor says, ‘I can tell you right now the Brando estate is not going to like this, and we’re not too big fans of it either,’” Jones said. The licensor thought it was “too weird.”

“We sent it to the Brando estate and true to their word, they said, ‘Yeah he looks too old.’ The character who dies of a heart attack playing with his grandchild looks too old.”

But when you’re talking to the family of a legendary actor, their approval makes or breaks the deal.

“The best plans can always be crushed so quickly by any small comment, any weird change of mind,” Ishmael said. “I think we’re pretty good at this point of selling ourselves and getting ourselves over the finish line with problem posters, but this one was just not salvageable at all.”

Scrapping a project is as tough for the Mondo staff as it is for the artists, but it’s a reality of the business. Fortunately, a lot of projects do make it to print, even if they get tweaked along the way.

Though fans will debate their feelings on Man of Steel, Ken Taylor’s illustration of a young Superman running through a field is clearly beautiful. 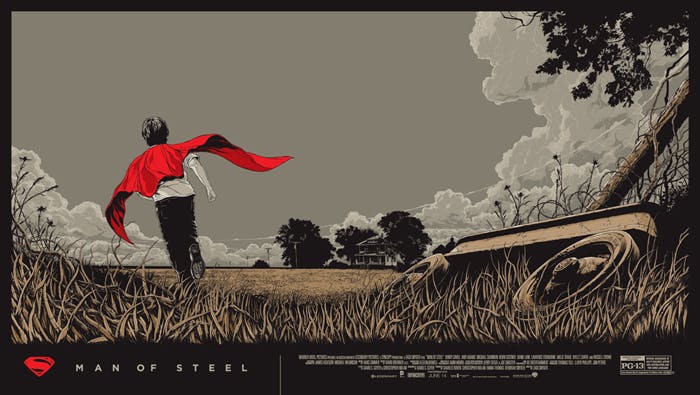 By Ken Taylor, courtesy of Mondo

But it didn’t start out so flawless. After going back and forth about the focus of the piece, Jones pitched the idea of zeroing in on the hero as a boy, based a scene in the movie trailer.

When the illustration came back, though, the boy “looked like a weird dwarf” Jones said. He went back and forth with Taylor on adding a dog (which got cut), and making the boy’s movements more fluid.

This dialogue between Mondo’s art direction team and the artist drives toward one thing: Making something awesome.

And that’s why fans like Marquez and Kitchen can’t wait for the next MondoCon—one they hope will be even bigger.