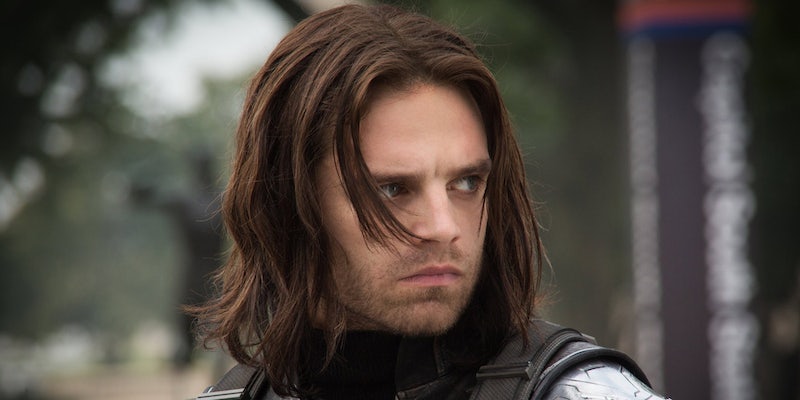 Like a star of silent film, he is still a beautiful mystery.

The vagaries of Tumblr’s meme-like crushes often seem unfathomable. Sure, Tom Hiddleston is handsome, but is he really that great? And why are so many people obsessed with Dylan O’Brien, out of all the actors on Teen Wolf?

We’ve spent a while tracking Tumblr’s various actor fandoms, from Jennifer Lawrence to Idris Elba, and arrived at the conclusion that this year’s big summer hit is Sebastian Stan. As in, that guy who starred in Captain America: The Winter Soldier as the titular Winter Soldier, but had such a tiny amount of dialogue that he compared it to acting a silent film.

Perhaps it’s that mysterious silence that has made him so popular over the past few weeks. It leaves fans wanting more.

The problem is, there isn’t much more. And we’re not just talking about the two-year wait for a sequel. If you came out of Captain America wanting to see more of Chris Evans, then you’re in luck. He already has about 20 other movies under his belt, and several of them are other superhero adaptations. However, Sebastian Stan’s accessible acting credits are mostly limited to recurring roles on Once Upon A Time and Gossip Girl, a few terrible movies that barely anyone watched, and an intriguing pedigree as Hollywood’s go-to guy for sad gay youth roles. (We’ll get back to that one in a moment.) 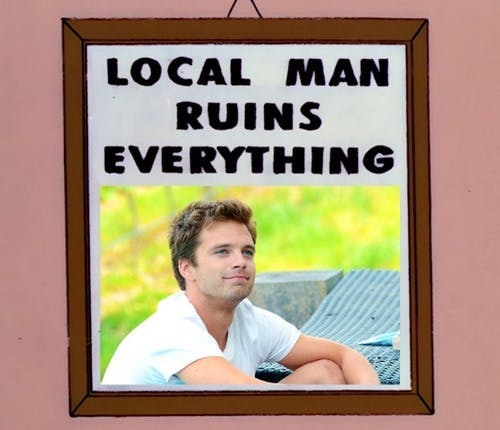 In the few weeks following the U.S. release of Captain America: The Winter Soldier, Sebastian Stan was near the top of IMDb’s STARmeter, which basically means he was one of the most-Googled actors in the world.

Two months later he’s at number 76, which isn’t bad for a guy who has never had a leading man role, and whose most prominent appearance to date is playing Captain America’s dead best friend. All this Googling is indicative of one thing: People want to watch Sebastian Stan in something else. Anything else. Unfortunately, he has nothing coming up. No other movies in pre-production. No TV appearances. Nothing. We can probably assume that his agent is being inundated with calls after Winter Soldier’s $697 million box office success, but at the moment your only chance of seeing more Bazzy Stan is to check out his back catalogue. Basically, you have to join the ever-growing number of people who are personally outraged that Kings got cancelled after a mere 13 episodes.

(Kings, by the way, is one of the two separate TV shows where Sebastian Stan played the gay heir to a political dynasty, a very specific brand of typecasting.)

Looking at Sebastian Stan’s greatest hits, you’ll notice a lot of roles that involve at least two of the following three things: crying, kissing other men, and being an angry pile of angst. A lot of the time, it’s all three at once. Following Marvel fandom’s sudden and slightly unexpected obsession with Captain America: The Winter Soldier, Tumblr fandom quickly began cataloguing Stan’s entire filmography, coming up with three headliners. First, Kings, which is arguably the only “good” thing he’s ever done. Second, Hot Tub Time Machine, which is hilarious from a Winter Soldier perspective because he plays a 1980s jock who spends most of his screentime in the snow, yelling about communists. Third: The Covenant.

If you examine The Covenant (which could nominally be called Sebastian Stan’s breakout role), you’ll see the larval stages of his onscreen career for the next decade.

Pitched as an all-male version of teen witch movie The Craft, The Covenant is a vehicle for Taylor Kitsch, Chace Crawford, and Sebastian Stan to have homoerotic wizard battles while in their underwear. Come to think of it, it’s kind of a precursor to Teen Wolf’s love of setting so many werewolf fight scenes in the lacrosse team locker room.

Thanks to this combination of shirtless pre-fame teen heartthrobs and total B-movie nonsense, The Covenant was already a cult favorite before Sebastian Stan became the crush du jour of Tumblr fandom. Now, the popularity of Winter Soldier has undoubtedly caused DVD sales (and illegal downloads) to skyrocket.

For an idea of the kind of cinematic quality we’re looking at here, watch this scene where Stan’s character monologues incoherently about Little Miss Muffet. After this kind of experience, he was probably glad that his role in Winter Soldier required virtually no dialogue at all. He’s been burned before.

Casting Sebastian Stan as Bucky Barnes was a stroke of genius. Somehow, his not-so-illustrious career of tearful manpain had crafted him into the perfect choice to play Steve Rogers’ loyal but morally ambiguous bad-boy sidekick.

In Bucky Barnes we see a more friendly, flirty version of the douchebaggery he displays in Gossip Girl and Hot Tub Time Machine, while in the Winter Soldier we see the lonely trauma of his character in Kings, another soldier whose life is ruined and controlled by an oppressive father figure. And overlaying it all is Stan’s ability to gaze with slightly avaricious longing at the object of his affections, which in the case of both Captain America movies is Steve Rogers himself.

As a prominent Marvel Studios sequel, Captain America: The Winter Soldier was virtually guaranteed to be a box office success. The surprising part came afterwards, when the Internet fan audience of fanfiction writers and Tumblr/Twitter users became ferociously obsessed.

This wasn’t just the typical “Hey, we really like the Avengers and this is another Avengers movie” kind of obsession that gently reawakens every time a new Marvel movie comes out. This was a tsunami of fangirl tears, accompanied by a veritable library of meta discussion and novel-length fanfics that appeared within days of the film’s release. And mostly, this obsession was driven by the intense emotional torment of the Captain America/Winter Soldier relationship: a duo of best friends who were torn apart by war, only to be reunited after one of them was brainwashed to be an emotionless cyborg assassin. It’s a conflict that goes straight into the heart of Tumblr fandom’s collective love of romantic tragedy, unbreakable partnerships, handsome crying men, and superheroes.

Whether you believe that Cap and Bucky are boyfriends or just platonically codependent partners, not since the doomed love of Remus Lupin and Sirius Black has fandom become so enamored with such a miserable fanfic pairing.

Unlike with previous Tumblr crush overlords such as Jennifer Lawrence and Tom Hiddleston, the whole Sebastian Stan phenomenon isn’t particularly based on personality. Stan’s social media output is restricted to his Instagram account, and he’s not famous enough to have done any seriously in-depth interviews like his Captain America co-stars Chris Evans and Scarlett Johansson. His Marvel press tour appearances are adorable, but he’s not the best at answering questions.

The main thing his fans have latched onto is his style sense, which can most easily be summarized by the Tumblr epithet “TRASH PRINCE.” He’s one of those lucky people who still look good when unshowered and hungover, which is fortunate for him, because he looks kind of unshowered and hungover almost all the time.

Pretty much every photoshoot he’s ever done has involved black skinny jeans, scuffed boots, and a threadbare hoodie or t-shirt: precisely the same outfit he wears to publicity appearances, red carpet events, and probably to bed.

“I think every guy should own a pair of skinny black jeans and boots,” he said in one interview. “When I showed up to this photo shoot I had been wearing mine for like two days.”

By the time Captain America 3 comes out in 2016, it’s safe to say that Marvel will have figured out how to capitalize on Winter Soldier’s unexpected popularity. Part of that will be to give Sebastian Stan a far more prominent place in the studio’s roster of fan-oriented publicity appearances, as well as a bigger role in the actual movie.

Perhaps by then he’ll also have starred in another genuinely good movie, although it’s possible that he really does just enjoy making weird, often terrible films where he takes off his shirt and cries a lot. Honestly, it’s anyone’s guess. Like a star of silent film, he is still a beautiful mystery.