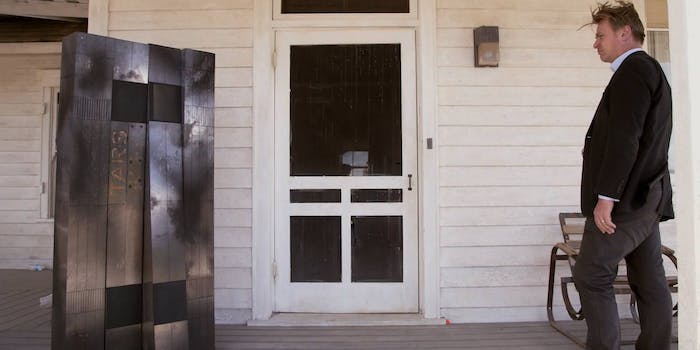 How the most unique character in ‘Interstellar’ was brought to life

The real star of Interstellar was not Matthew McConaughey or Anne Hathaway, but the stainless steel rectangular machine, TARS.

Based on Christopher Nolan’s previous works, we had a feeling that he wouldn’t opt for CGI when animating and designing his machines, and for the most part we were right. The video below, which details the making of TARS, explains the pains the puppeteers had to go through to make it come to life.

The video explains what makes TARS such a memorable and relatable character. Its design is incredibly simple, unlike a robot or an android trying to simulate a human design. It’s purely function over form.

But its also TARS’ artificial intelligence, which was so keenly developed. Although people like Elon Musk may fear a future with artificial intelligence, a machine that’s so acutely aware of its own function and mortality turns out to be a very human-like companion with none of the emotional baggage. The humans end up trying to project their own emotions and values on TARS when in reality its only function is to help, no matter what the cost.

We’re not the only people who love TARS. Adam Savage from Mythbusters is quite fond of the monolithic machine as well.