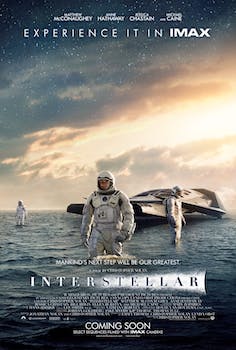 'Interstellar' falls short of the lofty ideals that Nolan hopes will make it more than just a sci-fi flick.

Christopher Nolan is incredibly good at making science-fiction movies for people who think they don’t like sci-fi.

Somehow, Nolan has created a personal brand that lets him make big-budget Hollywood movies about Batman, dream thieves (Inception), and self-cloning Victorian magicians (The Prestige), and still be described by critics as as a visionary director. By distancing himself from the perception that sci-fi cinema is frivolous or lowbrow, he’s managed to introduce the genre to people who scorn it at every other opportunity. Interstellar is a particularly entertaining example, because while it’s an undeniably impressive work, it’s still just as ridiculous, melodramatic, and nonsensical as your average sci-fi blockbuster (say, Armageddon, or Stargate, or Jurassic Park).

Despite the aura of secrecy surrounding what actually happens in Interstellar, much of it is very easy to predict. It’s a Christopher Nolan movie, and as such, it shares a lot of familiar themes with his previous work.

As ever, the lead character is a flawed but heroic figure whose wife, inevitably, is dead. (Nolan has an ongoing passion for making A-list actors scream and weep over their fictional dead wives, with the obvious exception of Batman. As this Vulture supercut points out, though, Batman’s love interest Rachel Dawes is killed as soon as she agrees to marry another man, neatly providing Batman with yet another source of emotional torment.) Other familiar Nolan tropes return for Interstellar, including ribcage-vibrating action sequences, gorgeous but sterile visuals, clunky dialogue, and a certain amount of pseudo-philosophical waffle. The main improvement is that Interstellar has a far more compelling emotional core, and his female characters now bear a closer resemblance to genuine human beings.

Nolan’s career has been dominated by science fiction and fantasy, but he’s made a steadfast effort to elevate his work above “normal” sci-fi blockbusters—or at least to disguise the similarities. Inception feels like a spiritual successor to The Matrix, but with the trappings of a corporate espionage thriller to lend it an air of sophistication. And of course, Nolan’s Batman is a study in being as serious as humanly possible while telling a story about a billionaire in a black rubber suit and a cape, fighting organized crime by punching it in the face.

So it’s no surprise that while Interstellar is impressively thought-provoking for what it is (i.e. a film about a square-jawed American dad using wormhole travel to save mankind), it’s nowhere near as deep as its publicity materials would have you believe.

Interstellar’s prerelease publicity relied on two things: obsessive spoiler-phobia (several cast members were not officially revealed beforehand), and an adherence to Christopher Nolan’s public image as the respectable, intellectual auteur of the Hollywood blockbuster genre. We weren’t told much about the plot, but we were given access to educational space travel apps, Google-sponsored science lesson plans, and interviews with Interstellar’s resident astrophysicist Kip Thorne. Clearly this was going to be a step above Hollywood’s typical science fiction fare of Star Trek, Planet of the Apes and Iron Man.

Except, Interstellar is about as scientific as Donnie Darko. Which isn’t a problem! It’s fine! There’s nothing wrong with hiring the best cast and crew money can buy, and making a really good movie about five-dimensional alien gods guiding humanity into the stars. But it’s pretty hilarious to write a screenplay that hinges on the protagonist communicating through time and space using Morse code blips on a pocket-watch, and then imply that you’re reaching for a more lofty ideal than the pseudoscience behind Stargate.

On one level Interstellar is a film about how technological development isn’t good or evil but is a neutral force guided by the fallibility of human emotion. In direct opposition to Hal 9000 in 2001: A Space Odyssey, Interstellar’s artificial intelligences were designed to be as reassuringly un-creepy as possible. These robots circumvent the Uncanny Valley by being faceless slabs of metal, programmed with a sense of humor to keep their human masters (and the audience) feeling comfortable.

The main robot TARS makes cracks about venting the human astronauts out of the airlock, but this veneer of personality doesn’t make it an actual person. TARS and the other robots lack a survival instinct, and thus can only ever be hyper-intelligent tools to be governed by human decisions. Meanwhile all of the human characters are near-hysterical with emotional biases, driven to great extremes by their desire to save themselves and their loved ones from apocalyptic destruction.

So here we have two contrasting messages: a criticism of science fiction that demonises technological development but also a full-frontal embrace of the kind of Hollywood fairytale where world-ending problems are solved by the power of love. Interstellar is essentially three-hour commercial for NASA and the importance of space exploration, but the central plot relies on a series of events that aren’t just fantastical but downright nonsense.

If anything, this is a story that takes to heart Arthur C. Clarke’s famous aphorism: “Any sufficiently advanced technology is indistinguishable from magic.” It’s just too bad that Christopher Nolan, and those who give him his well-deserved praise, can’t bring themselves to admit it.