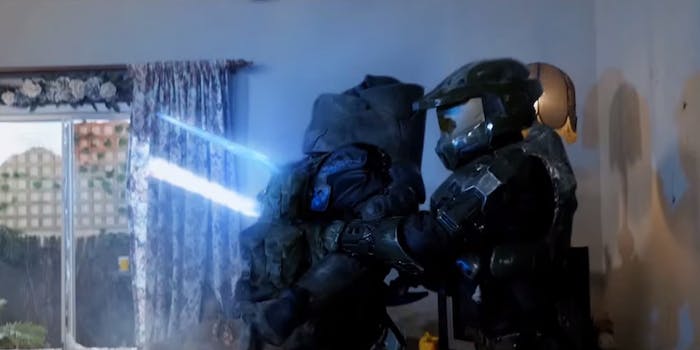 The battle of Halo vs. Call of Duty is filled with explosions

The age-old Playstation versus Xbox debate is fought in a new whole way.

A pair of Australian filmmakers and a love for physical stunts have given birth to an explosive video in which the two most popular first person-shooter franchises in the world go toe-to-toe.

Twin brothers Danny and Michael Philippou are a pair of comedy filmmakers that go by RackaRacka on YouTube. Among their slate of videos are “versus” shorts like Marvel vs DC and Game of Thrones VS Lord of the Rings. In their newest clip, Halo VS Call of Duty four PlayStation gamers are enjoying a round of Call of Duty: Advanced Warfare when someone declares that the only game Xbox has going for it is Halo.

That’s when Master Chief decides to pay the boys a visit and show them who’s boss. Several hundred rounds of assault rifle fire, a few plasma grenades, a Needler pistol, one camping sniper, and a horde of zombie senior citizens later, the house is a disaster and the long-running feud between Halo and Call of Duty fandom is still far from settled.