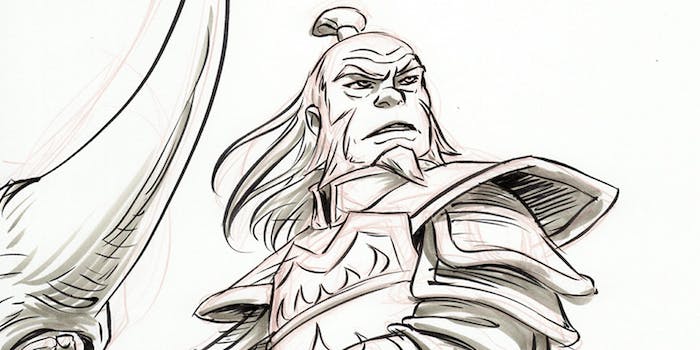 All your favorite characters in ink form

Bryan Konietzko is getting his drawing hand in shape and rolling up his sleeves. This month marks the sixth year of artists’ challenge Inktober, but it’s the first time one of the masterminds behind Avatar: The Last Airbender and The Legend of Korra, joins the fun.

Inktober is a month-long challenge for artists who take to social media and show off daily, new work. Illustrator Jake Parker originally created the Inktober challenge in 2009 as a quest for self-improvement. In the past years however, his easy-to-join challenge has garnered countless participation from artists all over the Internet. Add Konietzko to that list.

Konietzko announced on his Tumblr Oct. 1 that he was “finally going to participate in Inktober, instead of only AND in addition to being an avid spectator.”

So far Konietzko has posted four inked drawings of his original icons, including Avatar Aang, Appa, Uncle Iroh, and Nova, a character from his upcoming graphic novel, Threadworlds.

The artist managed to squeeze in a drawing of Prince Zuko for Inktober 2013 with less than two hours to spare, but it was his only post for that month. But now that he isn’t “buried in production,” Konietzko seems determined to update daily.

Avatar: The Last Airbender originally aired in 2005, finishing up in June 2008. The Legend of Korra aired more recently however, with the last episode airing in December. Although both series are long over, fans are still drawing from Konietzko’s creations for their own Inktober challenges.

Of course main characters like Toph Beifong and Avatar Korra have made their appearances on fans’ canvases.

Not to mention the crossovers!

Also this badass rendition of Korrasami as gunners from the anime Psycho Pass:

As the month has just started, there’s still plenty of time for more Avatar and Korra goodness—whether from fans or Bryan Konietzko himself.