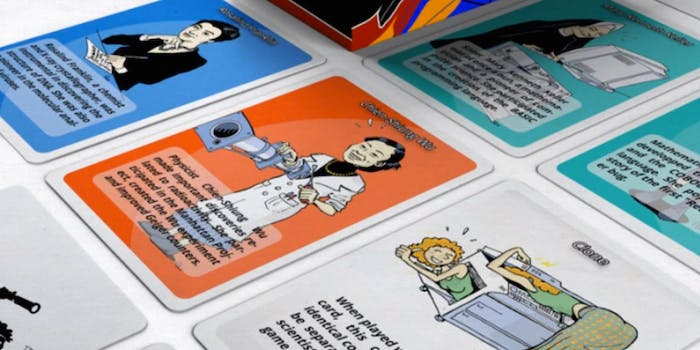 Have fun and learn about some amazing female scientists at the same time.

Can you name as many female scientists as male ones off the top of your head? If you’re having a hard time, you’re not alone. Thankfully, there’s a new crowdfunding campaign that will educate people about the amazing achievements of women in scientific fields.

The Indiegogo campaign is raising money to create a Women in Science card game. Each card will display an illustration of a woman and a description of her historic accomplishments.

“We’re just parents looking for inspiring role models for our 7-year-old daughter,” the creators write on Indiegogo. “We realised that we all know singers, actresses, etc., but in the end very little about the great women of science. A quick search demonstrated that they do exist, but that for historical reasons they’ve rarely received the recognition they deserve.”

The game will include 48 cards and is meant for people ages 7 and up. To win the game, a player must form three “labs,” each of which requires four cards of the same color. The scientists featured in the game include Cecilia Payne, Rosalind Franklin, Wangari Maathai, and Chien-Shiung Wu.

“The fundamental idea is to familiarize players with women who have left their mark on science and often did not receive the recognition they were due,” the creators explained. “This isn’t just a question of fairness and gender equality, it’s also a matter of offering role models with whom young girls can identify.”

“It’s hardly surprising that few girls display an interest in physics or mathematics when they never hear about women who made extraordinary discoveries in these spheres,” the creators wrote.

The campaign quickly reached its goal of $3,000 and has so far raised more than $5,100 with 13 days of fundraising left. Not only are the creators donating packs of cards to schools and nonprofits, but 20 percent of their profits will also be donated to an organization that promotes women in science.