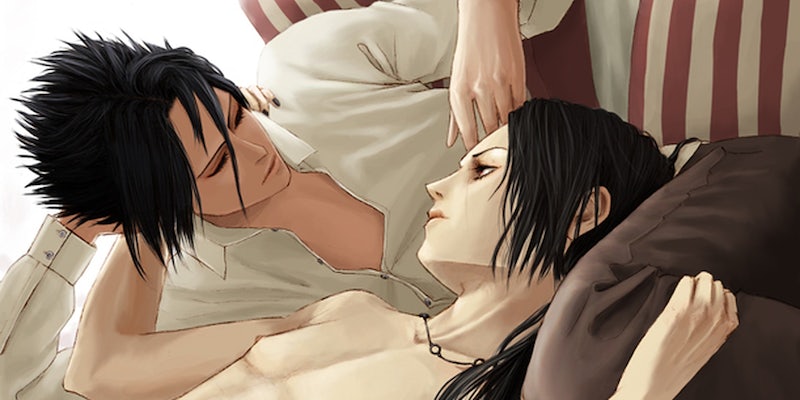 Chinese authorities have arrested at least 20 people for the crime of writing male/male fanfic.

Recent reports of crackdowns by Chinese officials on young female fans who write slash have sent waves of alarm throughout international fandom waters.

A new investigative report from Anhui TV claims that Chinese authorities have arrested at least 20 people for the crime of writing male/male fanfic—mostly polite, introverted young women in their 20s.

The increased attention to slash is part of a recently announced Internet “cleanup” by China’s National Office Against Pornographic and Illegal Publications. It’s apparently been tasked with deleting any kind of pornographic online content.

The whitewashing reportedly includes all text, pictures, videos, and advertisements. It also seems to include slash fic—specifically male/male slash and its Japanese cultural counterpart, yaoi or Boys Love. In China, it all falls under the term “dan mei.”

Slash is only one form of the many kinds of fanfiction on the Internet, and fanfiction in general is rarely more shocking than your average romance novel. But it seems some Chinese authorities have targeted slash and the young women who write it as a particularly appalling form of online pornography.

The lengthy report followed male police in Zhengzhou in Henan province as they pursued and arrested 28-year-old Wong Chao Jun, the admin of the now-offline site Dan Mei Fiction Web (DMXSW.com), a popular fanfic archive. Even though the website’s servers were housed in the U.S., where such content is perfectly legal, authorities arrested Chao Jun and closed the archive. Other popular fanfic archives, like jjwxc.net, stayed online but deleted all of their fanfiction categories.

The police officers also arrested young women who participated on the website, all the while expressing horror that the young women had fallen into such a shocking pastime. The report stated that most of the 20 fans who’d been arrested for writing fanfiction across the nation had been “introverted” women in their 20s. One young woman, Xiao Li, was described as being polite and “very obedient.” 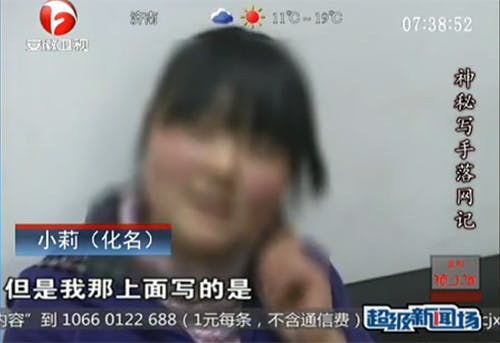 Another young woman broke down on camera, discussing how she fell into writing slash as though making up stories on the Internet is akin to buying a gateway drug.

Then again, in China, apparently it is. Last year, in its previous crackdown on the web, China boasted that it had killed 225 websites, 4,000 web channels, and 30,000 blogs. Members of the public are also encouraged to report any website they find that contains pornographic or offensive content.

The police officers in the report expressed disgust at the activity of writing fanfiction; one stated that he believed writing and reading slash “promotes homosexuality,” a comment that angered Chinese netizens. Offbeat China noted that many of China’s slash fangirls have defiantly labeled themselves “rotten women (??)” in order to highlight the banality of what they do. On Weibo,  ????LM angrily responded:

This is not cleaning the cyberspace. This is pure discrimination. I may never see a rainbow flag fly above China in my life time.

Recently U.S. media had a field day with the non-news that Johnlock fanfiction is extremely popular in China. The international Sherlock fandom is used to coming under media scrutiny and even ridicule from unexpected places. But the titillating shock value of straight women writing gay male romance has much more weighty implications in some parts of the world. In some countries, such as China and Australia, the legality of erotic fanfiction is questionable, and male/male slash and yaoi nearly always receive a harsher response from authorities than its heterosexual counterpart. In Canada, a manga fan was jailed for months in 2012 for transporting yaoi across the U.S. border before being released.

But despite the crackdown, it’s unlikely that the popularity of slash fanfic in China will dwindle.

After all, even if the Chinese government could confiscate the laptop of every fangirl in the land, they’ll have a far harder time eliminating the real source of slash fandom on the Internet: The simmering sexual tension between the characters we all love.