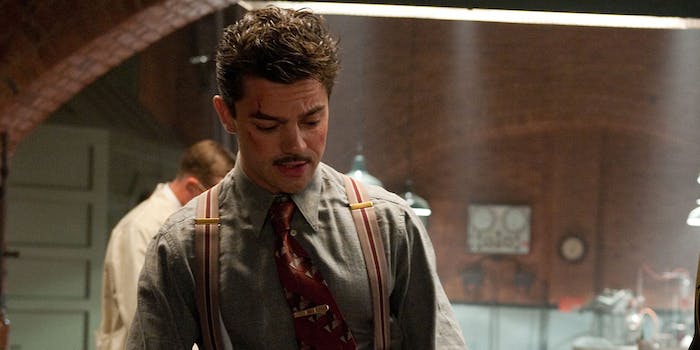 Dominic Cooper is back for Howard Stark role in ‘Agent Carter’

Fans are excited for more from Tony Stark's dad.

Dominic Cooper will reprise his role as Howard Stark for the TV series Agent Carter, Marvel has just confirmed.

Cooper’s involvement was one of the big question marks hanging over this show, because Howard Stark is such a major link between Peggy Carter’s 1940s storyline and the present-day Marvel Cinematic Universe. Rumors of his return began to heat up again when James D’arcy was cast as Stark butler Jarvis, the original inspiration for Tony Stark’s artificial intelligence J.A.R.V.I.S.

Howard Stark’s most significant role so far was in Captain America: The First Avenger, where he was instrumental in transforming Steve Rogers from asthmatic weakling to iconic supersoldier. Agent Carter will focus on Peggy Carter’s life after WWII, having to balance a frustrating administrative job while moonlighting for Howard Stark. We will almost certainly see the two characters sow the early seeds of what will eventually turn into S.H.I.E.L.D., one of the lynchpins of the Marvel Cinematic Universe.

It’s not exactly shocking to hear that Howard Stark will be back, but fans are freaking out anyway. Marvel has been holding back on this announcement for a surprisingly long time.

My friends and I are all geeking over Howard Stark, I love us.

Yesss! @dominiccoop signed on to #AgentCarter to reprise his role as Howard Stark! So excited! He’s so good in the role!

The return of Howard Stark is exciting news for anyone who is invested in the complex nature of the Marvel Cinematic Universe, although it would be nice to hear about some more female characters in Agent Carter. The showrunners confirmed at San Diego Comic-Con that the series would feature female characters “both good and bad,” but so far it just looks like Hayley Atwell in the lead role plus five dudes.

Still, the first episode won’t air until early 2015, so there’s plenty of time for more announcements before then. A real coup would be a cameo from Natalie Dormer, who had a minor role in Captain America: The First Avenger—although sadly she’s kind of busy starring in Game of Thrones, The Hunger Games, and an ever-increasing number of other projects.