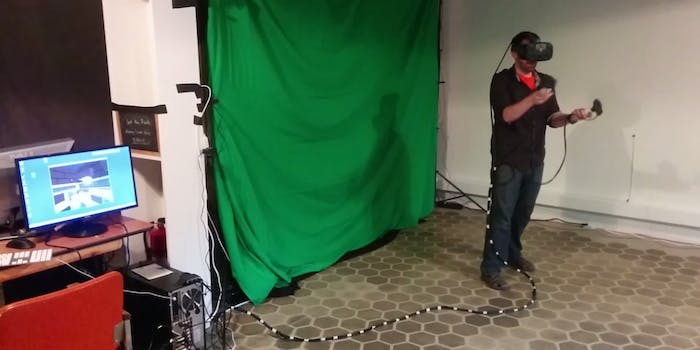 Developer shows us how to juggle in virtual reality

Juggling while standing in a kitchen full of knives and other sharp objects may not be the best idea in the real world, but in a virtual-reality kitchen, why not give it a shot?

Indie development studio Owlchemy Labs made a name for itself developing mobile games like Snuggle Truck and Jack Lumber. Now the studio has become one of the most vocal proselytizers for virtual reality, and its Job Simulator, a virtual-reality kitchen simulation, was a highlight of Valve’s Steam VR demo at the Game Developers Conference 2015.

One of Steam VR’s breakthroughs was the new controller system custom-designed for VR rigs. The prototype Steam VR controllers are lightweight and very precise. In this video, Owlchemy co-founder Alex Schwartz is really goofing off, but he’s also demonstrating how precise Valve’s new VR input system can be.

Schwartz recently revealed that Owlchemy Labs is going all-in on virtual reality. Chances are, if you’re an early adopter for consumer VR tech when it finally hits the market, you’re going to be playing a game developed by the studio.