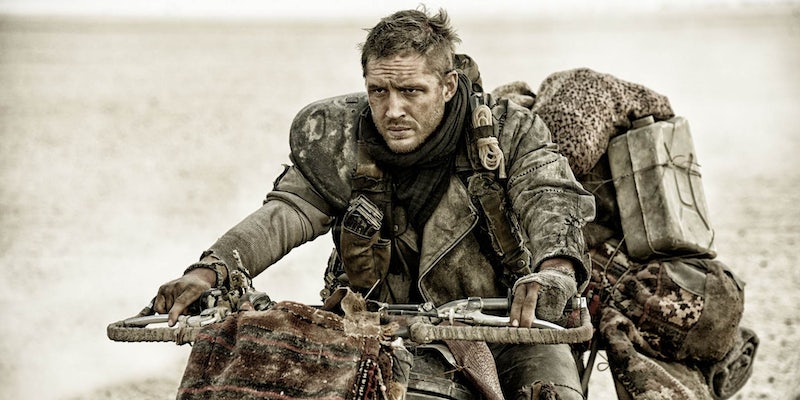 How to cosplay as any character from ‘Mad Max: Fury Road’

Post-apocalyptic desert warrior is THE look for summer 2015. Here's how to achieve it on a budget.

If you’ve spent time obsessing over Mad Max: Fury Road, you’re not alone. Critics have fallen over themselves to give it positive reviews, complimenting everything from its dangerously realistic practical stunts to its strong feminist message.

The good news is that, with a few specific exceptions like Immortan Joe’s armor or Furiosa’s prosthetic arm, Fury Road‘s post-apocalyptic costumes are relatively easy to replicate. Even if you’re not an experienced cosplayer, you should be able to make one of these outfits in time for your next costume party.

Immortan Joe’s War Boys provide one of the simplest costumes in the movie: Distressed combat pants, black-and-white body paint or chalk, and possibly some scars (which you can make yourself or buy cheaply from eBay or a Halloween costume store).

The War Boys paint their skin white with smudged black paint over their eyes and typically go shirtless—although you can add a leather jacket if you’re feeling chilly. You can accessorize with black leather cuff bracelets or goggles (which are cheaply available thanks to the prevalence of steampunk and anime cosplayers), but our top recommendation is definitely edible silver spray paint. 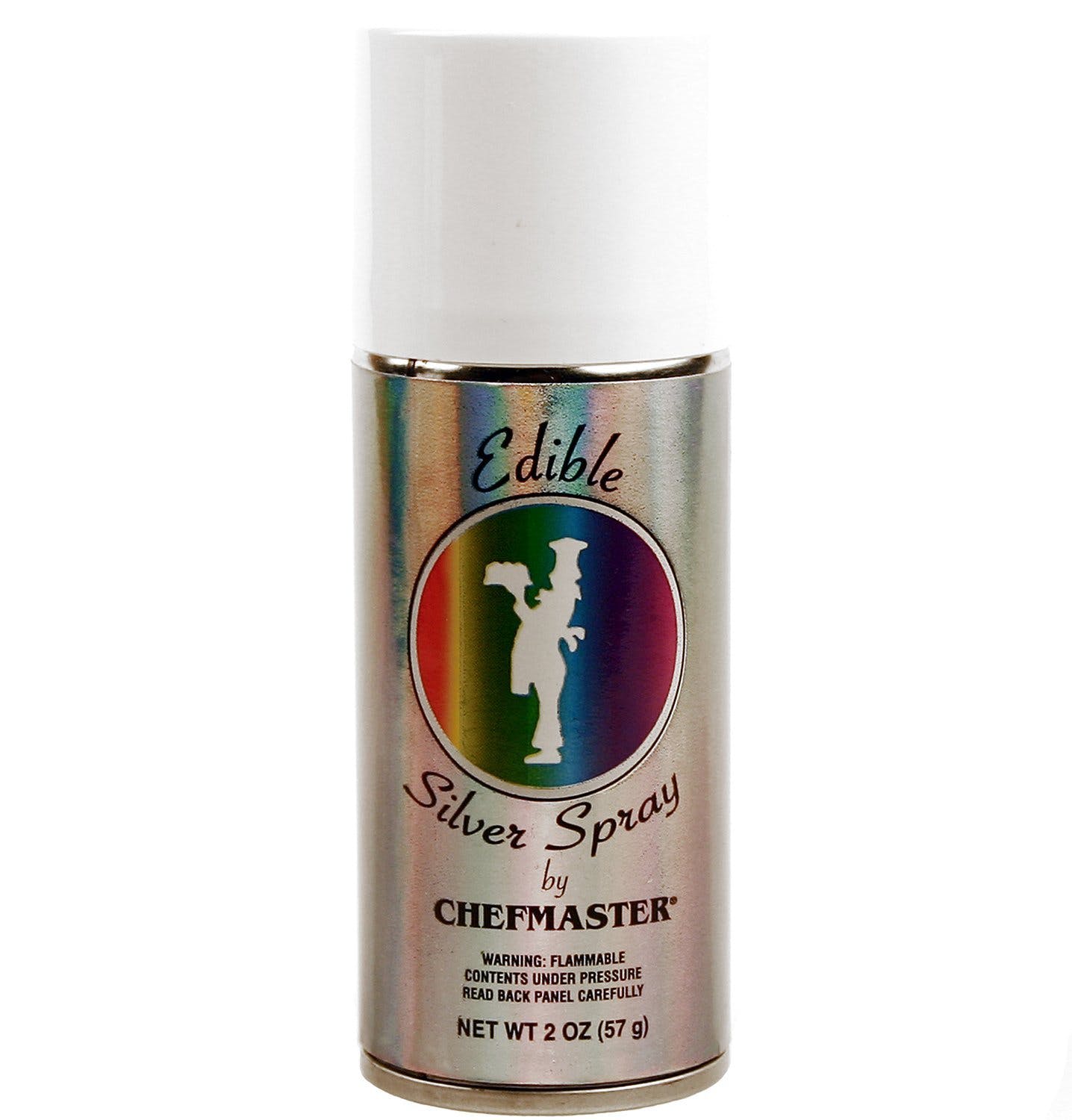 This stuff is meant for cake decoration, but an enterprising Mad Max fan realized that it’s also a perfect cosplay prop. The War Boys spray silver paint on their mouths and teeth if they think they’re about to die in battle, and edible confectionery spray provides a safe alternative. Just wrap some duct tape around the can to make it look less clean and shiny, and you can carry it around as a DIY part of your costume.

In the grimy world of Fury Road, the only people wearing clean clothes are the women fleeing Immortan Joe’s Citadel. According to actress Rosie Huntington-Whiteley (the Splendid Angharad), the “Wives” customized their own costumes:

“I turned up in the costume department and George said take your pick of all of these bandages and design yourself some kind of outfit, at which my mouth sort of hit the floor and said, “…okay.””

If you’re feeling daring, you can try to copy this look by buying a roll of cream or white cheesecloth and pinning or tying it around your body. Alternatively, you could shop around for simple white dresses and bikinis and then add actual bandages on top, but this will produce a less accurate effect.

The easiest costume to copy is Angharad’s, as it’s just a strapless minidress, but you need to be pregnant—or have a prosthetic pregnancy belly—for it to really work.

Furiosa boasts the most iconic look in the movie, but it’s also one of the most complicated. If you have short hair, several extra belts, and a lot of black eye makeup, you may be able to put together a respectable imitation from your own wardrobe.

However, a completely accurate costume will take a lot more work. You can start by distressing a pair of old brown jeans or reinforced riding pants (try searching for motocross or equestrian gear) and a beige t-shirt. Furiosa wears a black underbust corset with leather belts on top to secure her prosthetic arm, plus a brown circle scarf to use as a mask during sandstorms. To make things simpler, you could just wrap a piece of black fabric around your waist and cover it with several belts.

Furiosa’s arm is best left to the experts, but Etsy is rife with the type of shoulder armor she wears to anchor her prosthetic. This asymmetrical shoulder pad, known as a pauldron, is a staple of post-apocalyptic fashion thanks to the earlier Mad Max movies, so Etsy sellers already have a wide range available for cosplay enthusiasts. You can get pauldrons already decorated and attached to leather jackets, armor made from actual car tires, and even direct replicas of Max’s shoulder pad in The Road Warrior. 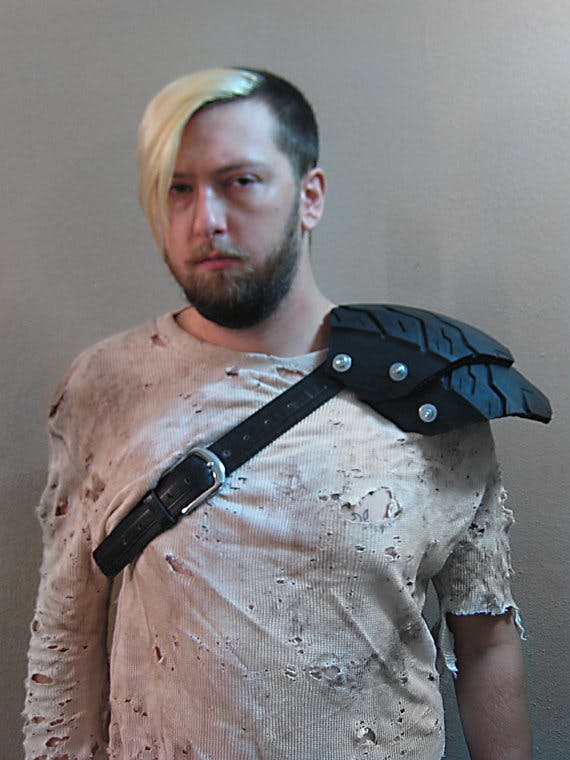 Max is a tricky choice because his costume is so “normal” (filthy shirt, filthy pants, filthy leather jacket) that you have to be very accurate if you want to be recognizable. The most obvious solution is to buy a replica of Max’s mask from the earlier scenes in the film, but we’ll just direct you to the Mad Max Costumes website. 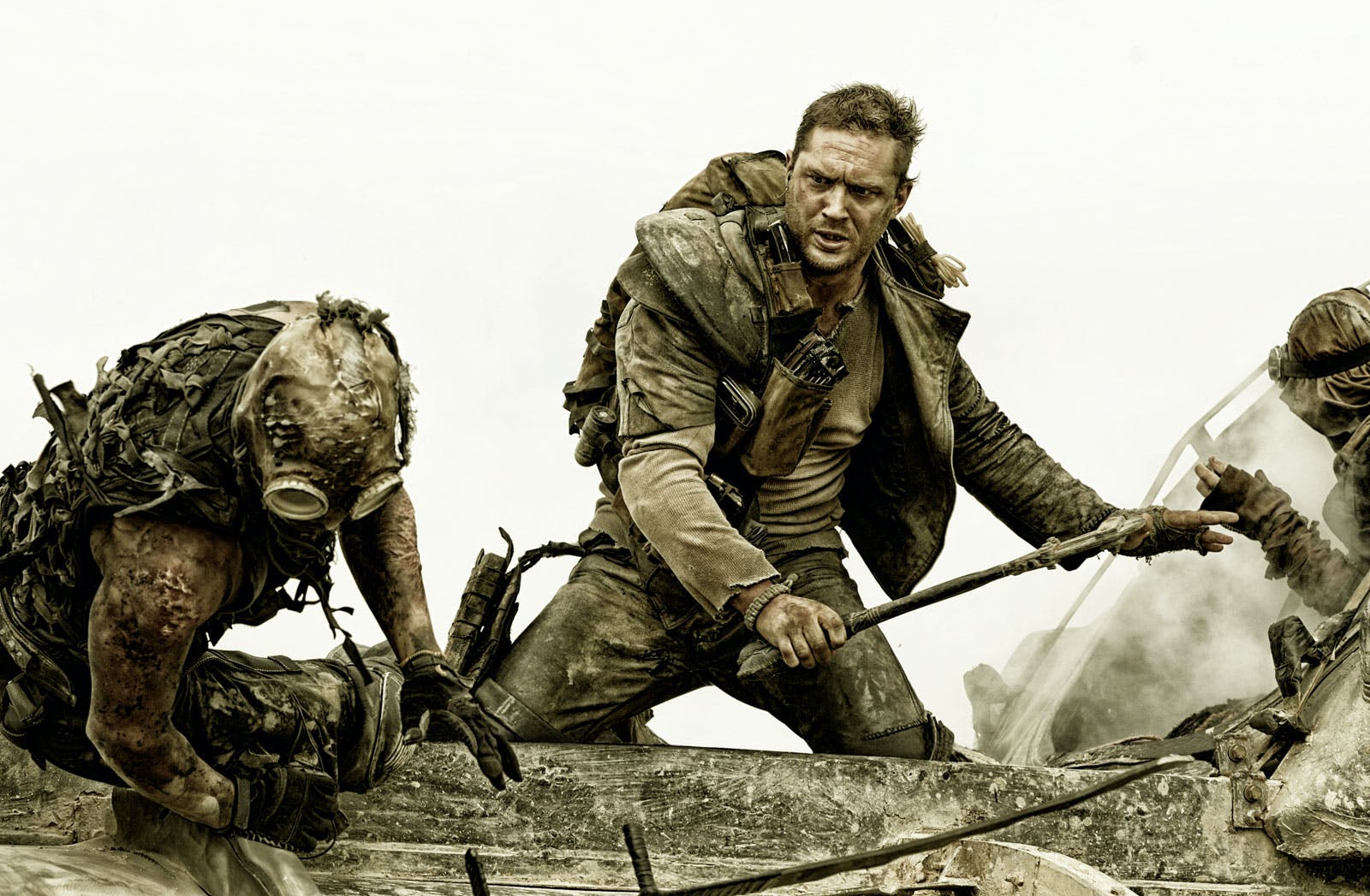 This site is an invaluable resource if you want to make a serious attempt at dressing like Max himself. It includes detailed instructions for building the leg brace that Max wears from the second film onward, and it’s starting to document costumes from Fury Road as well. For example, the site recommends this shirt, which you then have to tear up and distress until it looks more like Max’s.

Another key item is Max’s friendship bracelet, which actually belongs to Tom Hardy. He made another one (a “brocelet“) for his friend and stunt double Jacob Tomuri.

The Vuvalini are a gift to older female cosplayers, who have precious few characters to choose from in the world of sci-fi and fantasy. To dress as one of the Many Mothers, you’ll need plenty of old scarves and rags, old jeans or canvas pants, knit sweaters, and goggles. We also suggest an ammunition belt, an old carpet bag, or a leather doctor’s bag full of seeds. Just make sure everything is the color of dirt and looks at least 50 years old. 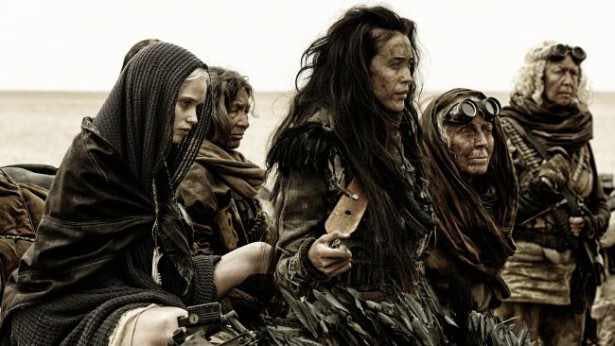 Post-apocalyptic fashion is so popular that there are numerous tutorials on how to distress, stain or otherwise customize clothes so they look like they’ve survived decades in a nuclear wasteland. Even if you’re not aiming for a professional-grade cosplay replica of Furiosa or Max’s costume, you’ll definitely be able to achieve a respectable Fury Road look. Just make up your own Mad Max name and backstory, and you’re all set.