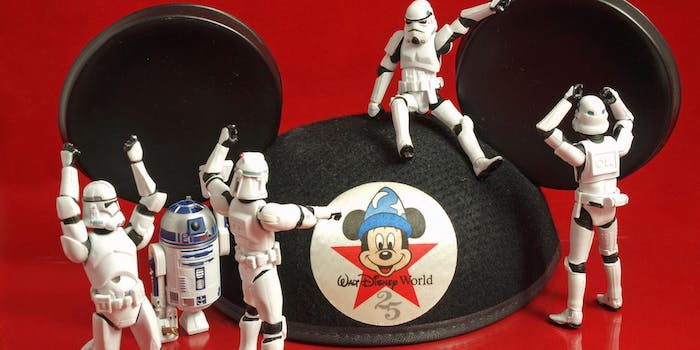 How Disney saved my fandom

You're never too old to rediscover the magic.

Hi, I’m Aaron and I’m a Star Wars Addict. Yet it hasn’t always been so. Matter of fact, I have to thank Disney as well as my friend Robbie for saving my faltering fandom. This is that story.

Like many of you reading, my love for the Wars began at a young age. I remember flipping over the coffee table for cover to help the crew fight as the Stormtroopers stormed the Tantive IV at the beginning of A New Hope. I remember back in the mid-80s while I was living in Costa Rica, playing Star Wars on the playground with my friends. Up to that point, none of us had seen Return of the Jedi yet, so we were making our own ending to the Saga. Boy, were we way off, but that’s another story, for another time. I remember being so excited and completely engulfed in Timothy Zahn’s Thrawn trilogy, Kevin J. Anderson’s Jedi Academy trilogy. Growing up with parents who were (and still are) missionaries, I was limited with what novels I could get my hands on, not to mention the bloated prices an American has to pay trying to buy an English book in a Spanish-speaking, third world country. So with the lack of material available to me, my fandom faded and the Wars became just another movie I liked.

Those were the dark years.

Fast forward almost 18 years later to May of 2012 and according to some, I’m all grown up now. I’m a husband, a father, and working hard to support them. It was a normal Friday night and we had our best friends over for dinner. My friend Robbie told me he was heading to Disney’s Hollywood Studios the next morning for Star Wars Weekends, and invited me to join him. He planned on getting an autograph from either James Arnold Taylor or Ashley Eckstein.

I’m gonna level with you: my first response was, “Who?” As of the time he asked me to go, I have to admit that I had not watched a single episode of The Clone Wars, which by then had finished its fourth season. So I had no clue who Ahsoka Tano was or much less who performed any voices in the show.

Being a Disney Passholder and with only having visited Hollywood Studios once or twice before, I agreed to join him, not knowing what I was in for. I figured it would be fun to just hang out with a friend at Disney. No wives, no kids, just us guys. We left before the sun rose the next morning, making the 30-minute trek to Disney to get in line to snag a ticket to meet someone I never had heard of before. I will say I was impressed with the number of people in line that early in the morning and when I heard some had been there all night, I thought they were crazy. We stood in line for a while, eventually securing our fast pass reservation to meet Ashley Eckstein. It wasn’t long afterwards, the park opened and in we went.

Now if you have never been to Disney before, you are missing out. There is a magic in atmosphere unlike anywhere else. A magic that does not fade no matter how many times you visit. Yet this day, the magic was different. It started when I looked up and saw the white armor of Imperial Stormtroopers guarding the gates, then every light post had a Star Wars banner hanging from it. The main stage below the Fantasia hat was home to a life-size Han in carbonite guarded by Boba Fett. We visited Darth Mall’s, the memorabilia shop set up for the weekends. As we walked around the park, we checked out the many Star Wars character photo ops and, of course, we rode Star Tours as well as other rides.

Then there were the shows. That’s where I got my first glimpse at the extraordinary vocal talent of the great James Arnold Taylor, through his stage show Obi-Wan and Beyond, the show Stars of the Saga where he interviews the stars of the movies in attendance, and Behind The Force, the show that previewed the up coming season of The Clone Wars while exploring the magic of voice-over. Hearing from the stars of the movies and TV show was mind-blowing. Hearing JAT’s love of the Wars come through each of the shows and interviews was incredible.

Then the main event: meeting Ashley Eckstein. You can tell when someone is a true fan of something by how they interact with other fans and it was obvious to me that Ashley was the fan’s fan. I was brutally honest when I met her, admitting I had never watched a single episode of The Clone Wars and that I had no clue who she was. She was definitely taken back a little, but we had a great discussion about the show and she gave me brief overview of Ahsoka was while she was signing a head-shot for me. I was quite impressed with how candid and kind she was. We ended the conversation by taking a picture together.

This was week two of four that year. That day did me in. I was so blown away by my experience that day that I followed it up by going back the next weekend and meeting James Arnold Taylor who, again, completely blew my mind with his passion for Star Wars, his incredible talent, his kindness and especially his faith in God. He told me a little more about The Clone Wars, as well as some of the other places I probably have heard his voice. We talked about his beliefs since I noticed the background music for his show was by a Christian group I listened to as well. He was impressed that Robbie and I caught that. Meeting JAT confirmed and reinforced what my friend Robbie and the meeting with Ashley Eckstein started the week before: the rebirth of my fandom. I was reminded of everything I loved as a child.

Since then, I have not missed a week of Star Wars Weekends, that includes hitting the park multiple days during each weekend in 2013 as well. I have since watched every single episode of The Clone Wars, re-watched the Saga multiple times, and have made some great friends through fan sites and podcasts. Thanks to the help of Robbie’s brother, Angelo, I’m working on completing my first costume in order to join the Rebel Legion. I have been blessed to have met several stars of the movies and The Clone Wars through Star Wars Weekends and with the blessing of my wife, turned my game room into my Star Wars room.

This year will be incredible!

Aaron Harris will be covering Star Wars Weekends live from Hollywood Studios for the Coffee with Kenobi podcast. If you see him cruising the park, feel free to say hello. This story originally appeared on coffeewithkenobi.com and is republished with permission.