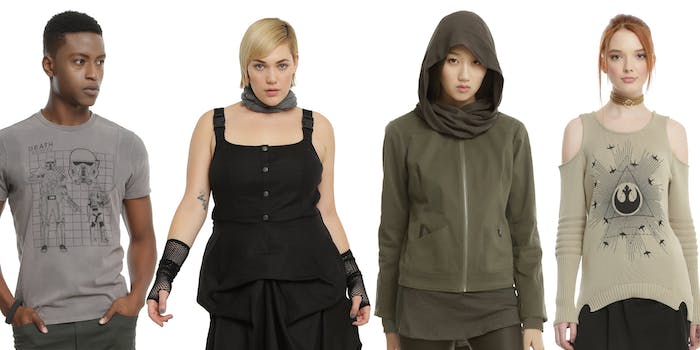 The fashion of 'Rogue One' is fully operational.

If you’re looking to join the Rebellion, you’re gonna need some proper attire.

Ahead of the theatrical release of Rogue One, Hot Topic is releasing its latest geek fashion line dedicated to the Rebels and Imperial forces who face off in the latest Star Wars film.

The Galactic Empire might have capes on their side, but the Rebels capture practical and tactical outfits inspired by Jyn Erso (Felicity Jones), Cassian Andor (Diego Luna) and the rest of Rogue One’s Rebel Alliance. There will be some Empire-related fashion at some point, with Hot Topic promising that a Death Trooper hoodie is on its way.

While it’s not the first clothing line to come out of Rogue One, it’s on the more affordable side, especially compared to something like Columbia’s limited edition coats. A T-shirt costs $29.90-$33.90 while a cardigan, jacket, or dress will be a bit pricier.

You can check out everything from the Rogue One line on Hot Topic’s website.