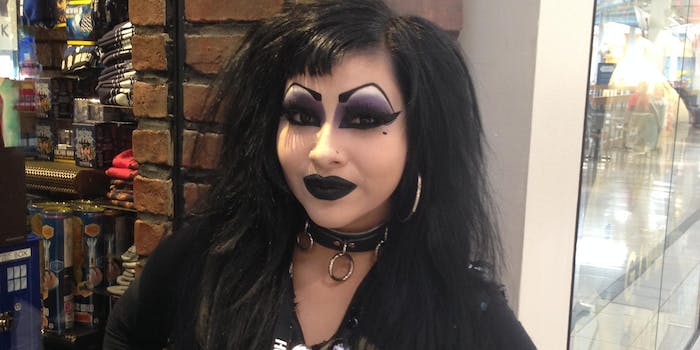 Hot Topic may have started as the alternative fashion store, but it's evolved into something more.

For the last 25 years, Hot Topic stores have been a staple of American mall corridors.

Many associate the stores with goth, emo, punk, or grunge. But Hot Topic has grown to become much more than its ‘90s persona. It’s evolved into a pop culture fashion leader and one of the most-influential companies in the growing world of geek fashion.

The “goth” store turned pop-culture powerhouse started somewhere that’s almost become cliché for major American corporations: in a garage. In October 1989, Hot Topic began as an idea in Southern California. Founder Orv Madden opened the very first store in November of that year in Montclair, Calif. Cindy Levitt was the very first employee hired by Hot Topic and is now senior vice president of merchandising and marketing. According to Levitt, the initial concept for the retailer was “to be a hip, junior, young men’s accessories chain.” That fall it opened a second store, and its staple products became jewelry, sunglasses, handbags, and other “forward and cool” accessories. One section was edgier, with accessories like spiked wristbands, collars, crucifixes, Harley Davidson jewelry, and skull and dragon designs.

“That section was blowing up, and we had handbags and burnished metal jewelry just sitting there. So we kept adding a little bit more, a little bit more of this darker kind of punk-alternative accessory collection and then Orv Madden, who was the founder, was very smart. Instead of trying to make it fly with our original concept, he and I went across the country to all these alternative stores that were usually in downtown areas. We came back and said let’s bring this look to the mall—to kids that can never get to these cool downtown type of stores in New York, Philadelphia, and Los Angeles,” Levitt told the Daily Dot. 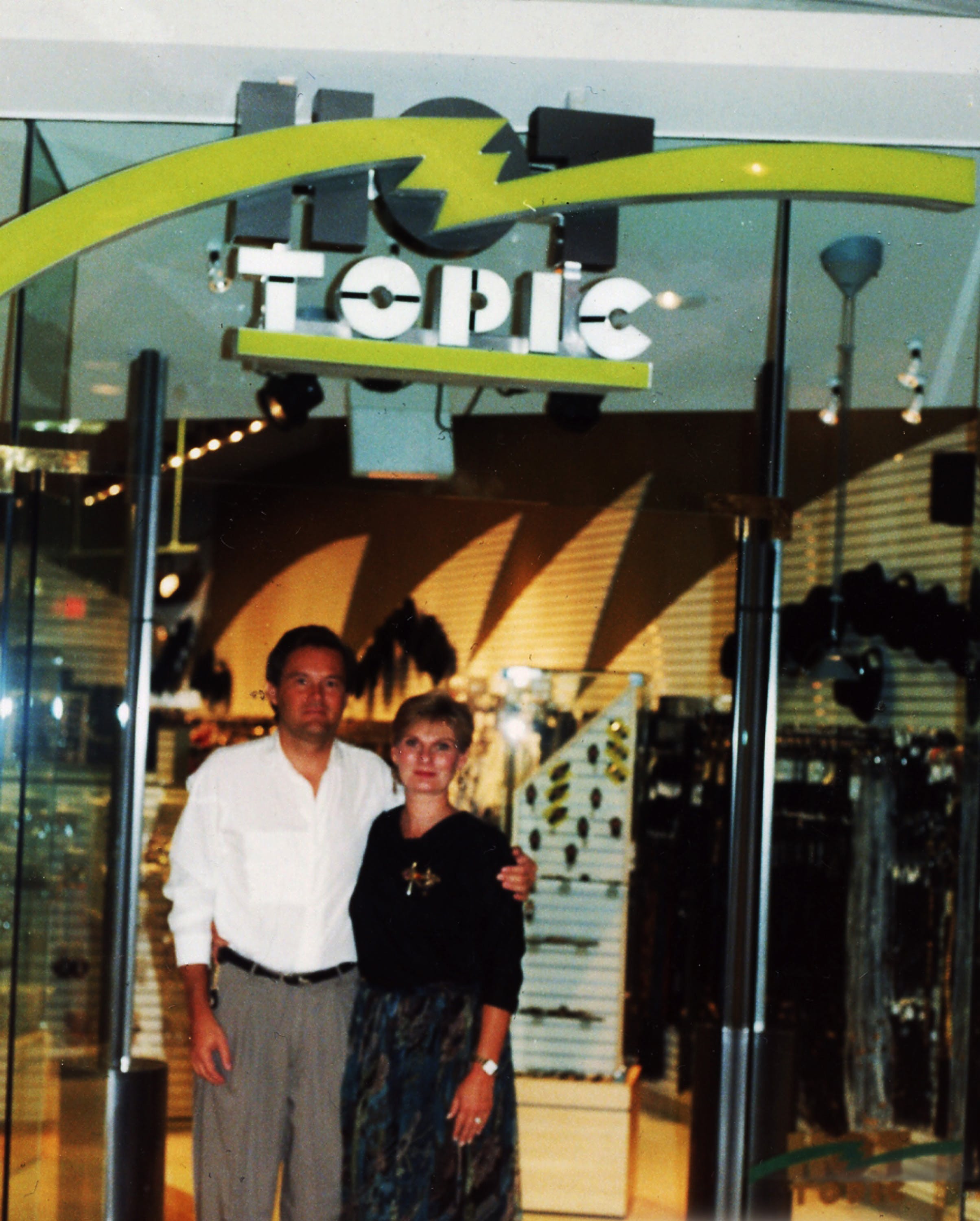 As a result, the entire concept for Hot Topic changed to cater to alternative looks. Since the stores were mostly in suburbs and not metro areas, Levitt said kids began to flock in to see fashion they’d only heard about.

“Shortly after that, our store manager said, ‘Since we’re carrying all this punk stuff and alternative stuff, kids are coming in and asking for rock tees.’ Back in 1989 you could not find rock tees in any kind of mall retailer, only at shows and some mom and pop shop kind of places. So we went out and tried to find rock tees that we could purchase for retail,” she explained.

The first shirts they brought in quickly sold out, and Levitt said within a couple months they began buying every rock tee they could find. The increase in music tees led to the creation of their iconic t-shirt display wall, and within just a year of opening Hot Topic had found its alternative identity. 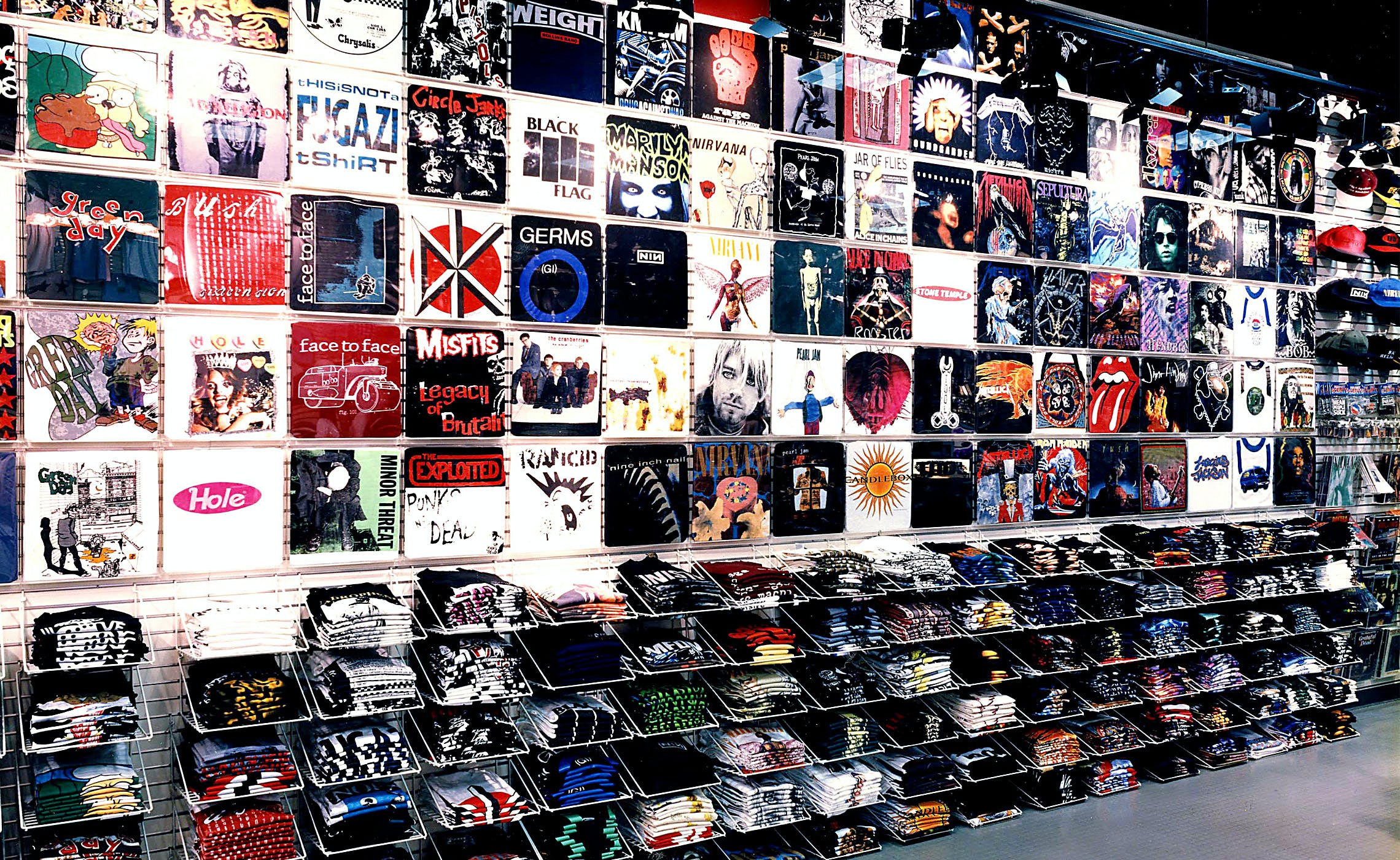 The retailer opened two more stores its second year and from there it continued to expand, eventually growing to have 659 stores nationwide today. The first employees like Levitt acted as buyers of merchandise by day and clerks at the stores at night to keep the company going. Levitt said the company has already tried to have an open-door policy between customers and employees. The rock tees arrived due to the customer requests relayed by a store manager, and it turns out their second big pop-culture expansion came from requests as well, this time for shirts inspired by In Living Color’s Homey the Clown. Homey became the first non-music license purchased by Hot Topic.

“It was the biggest thing we’ve ever seen, better than anything else we ever bought,” Levitt said. “Then after that Twin Peaks was popular so we bought Twin Peaks shirts. We found them, got them, and put those out. Then we started adding all these kinds of quirky licensed products. After that, one of our biggest breakthroughs was we started getting requests from customers in our stores for SpongeBob.”

Hot Topic, the store known for hiring employees with piercings to tattoos that sometimes shocked suburban mall-goers, was suddenly getting numerous requests for SpongeBob merchandise. According to Levitt, merchandise was unavailable, because it was a kids show and Nickelodeon was cultivating it, waiting to see how it did for a year before putting out merchandise. Unwilling to wait, Hot Topic scheduled a meeting with the company in New York and soon secured an exclusive deal for SpongeBob tees for a year.

“It opened up the world of pop culture licensing for us. Another element that happened about the same time was rave culture started getting really big. So because we became about the music, we started bringing all these kind of bright licenses and two of the big ones that really set a trend then were Care Bears and Strawberry Shortcake and that’s where we get the big wide pants, pacifier necklaces, and glow sticks,” Levitt said. “The very sweet kind of nostalgic licenses that were being worn with the big raves becoming very big, so that continued to open up the door for more pop-culture licensing, and since then we’ve evolved to be very much the destination for pop culture, with trying to be the first for all the new trends.” 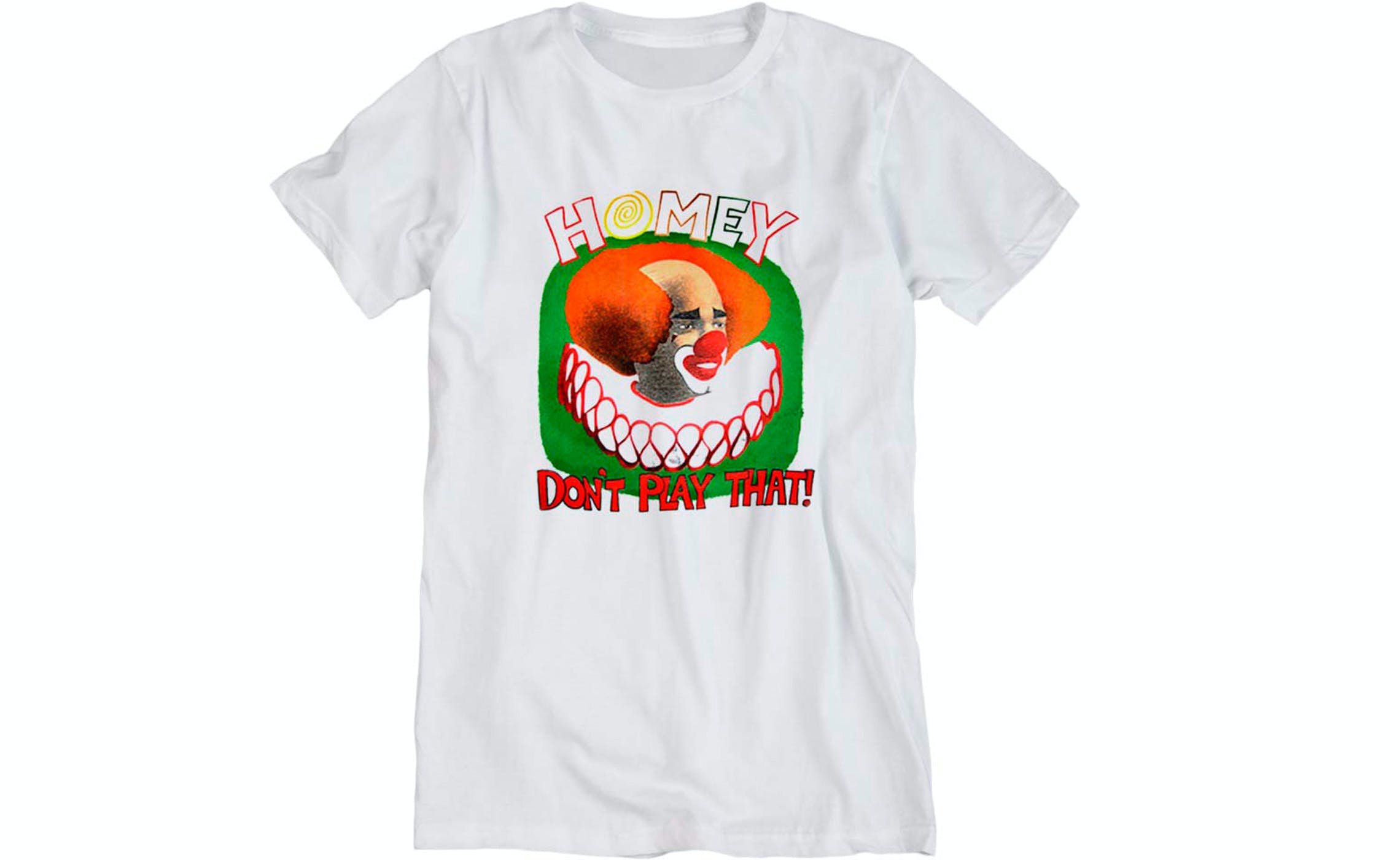 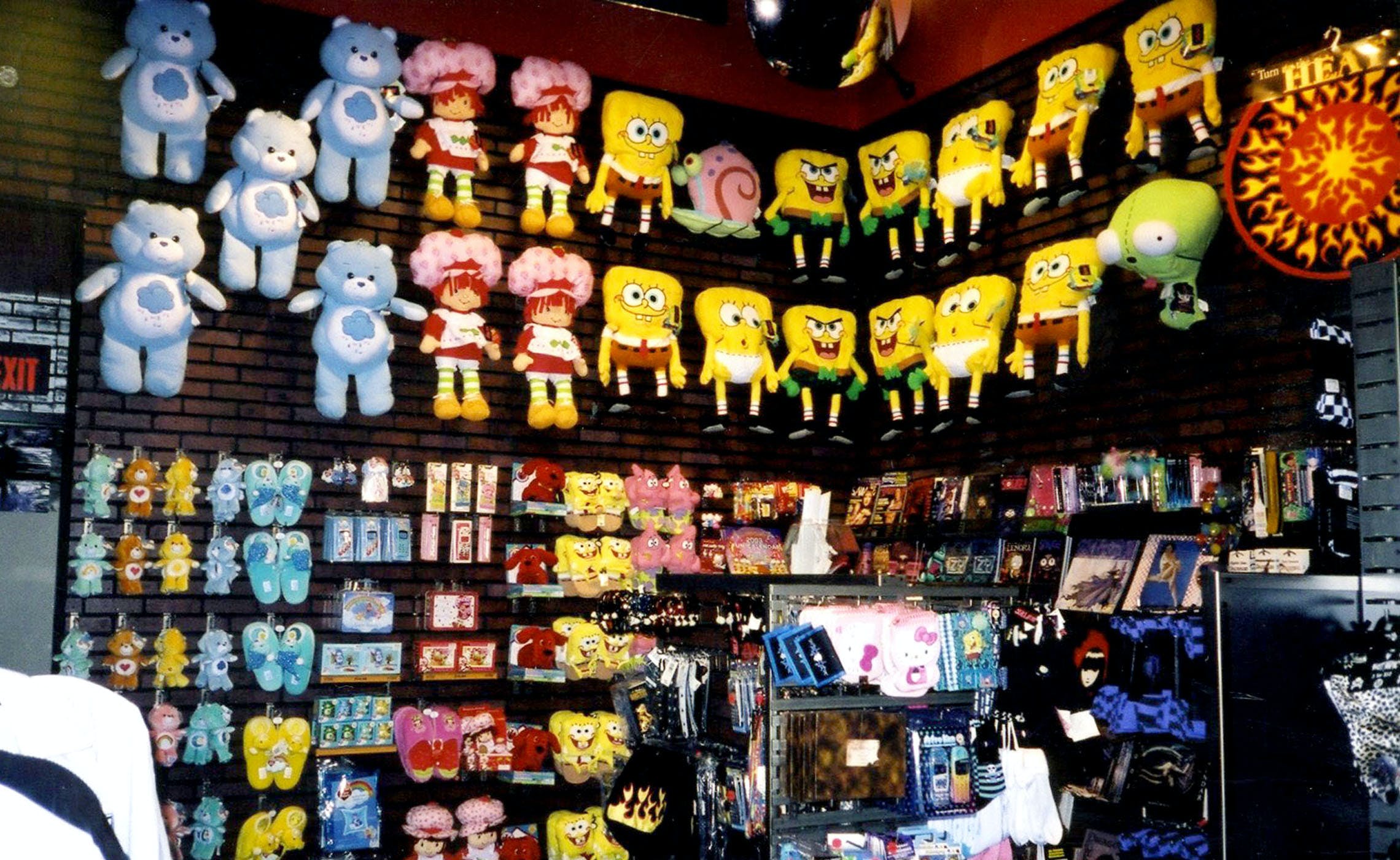 Since those SpongeBob tees arrived on Hot Topic’s shelves in 1999, its pop-culture licenses have expanded to include fan favorites like Napoleon Dynamite, Twilight, Harry Potter, Disney, Sherlock, and Doctor Who. Driven by customer requests, Hot Topic also expanded the availability of plus sizes in pop-culture fashion and other looks, opening retail chain Torrid in 2001 and partnering with other forward-thinking companies like online geek girl retailer Her Universe. Its growth has led to some controversies along the way, but from bringing back underoos to creating more subtle fan fashions, it’s out-of-the-box thinking makes it one of the most influential companies and perhaps most mainstream in the world of geek fashion.

Levitt believes Hot Topic has stood out as a pop-culture destination by staying ahead of what others are doing. While everyone else is increasing the number of geeky tees they sell, Hot Topic is looking for something new and paying attention to what customers are searching for. By seeing how fans dress at cons and expos, they notice trends like fans wearing looks inspired by franchises, but not exact costume replicas. Levitt said they use that combination to “elevate our licensed products past the T-shirt so that we can be different.”

“Part of it is cosplay-inspired and then our own employees just trying to throw together DIY outfits that kind of look like characters, so we would see merchandise selling that you can wear as part of a character,” Levitt said. “We decided to do these inspired-by collections like Maleficent and The Book of Life. We’ll have a beautiful Cinderella collection coming for the live action film in February.”

Even with Hot Topic’s large pop culture collection however, old impressions of the retailer as a “goth” store are hard to escape. But Hot Topic is having fun with this perception for its 25th anniversary, joking that its not “totally possessed” but “totally obsessed” with its fashions. Some of the craziest early rumors about the company were caused by the original goth, alternative look. Some people thought the stores were literally possessed and went in carrying bibles, while others whispered ridiculous notions about blood-letting in the back rooms and piercings in their stock rooms. South Park even aired an episode in which they burn down a Hot Topic—the store was actually the first to carry merchandise for the show—for a joke about turning people into vampires.

As part of its anniversary initiatives, Hot Topic even “gothed out” its website for a day and encouraged employees to dress goth for a weekend. It also encouraged fans to get involved in the celebration by sharing Hot Topic stories and selfies using the hashtag #HT25 on Twitter, Vine, and Instagram. Some of the selfies were selected to be included in store windows as part of the anniversary as well. To further thank customers for their business, Hot Topic is even sending some surprise gifts to a select few in the mail.

How sweet of @HotTopic to send me a gift on their birthday! Love this @Loungefly_ skull print wallet, thanks! #HT25 pic.twitter.com/hnzc4RvP8K

Got a free #legendofzelda Crew neck sent to me randomly yesterday from Hottopic for the 25 year anniversary #HT25 pic.twitter.com/ILTqCFojnL

As Hot Topic looks at how its past led to the present for this anniversary, Levitt said she “never in a million years thought Hot Topic would be what it is today.”

“It’s interesting how it played out. I wanted to be in fashion and now I think ‘Oh god, I’m dealing with Pokémon and the screwdriver from Doctor Who and whether or not to put a pentagram on something!’” she said.

It may be different from how it started, but for Levitt it’s been an amazing journey.

“To think we started in a garage 25 years ago not knowing if we could even get two stores to four stores open and to now be where we are today, to be a pop-culture icon it’s a pretty amazing story to have seen that happen,” she said.

You can learn more about Hot Topic’s history through the timeline on its website.