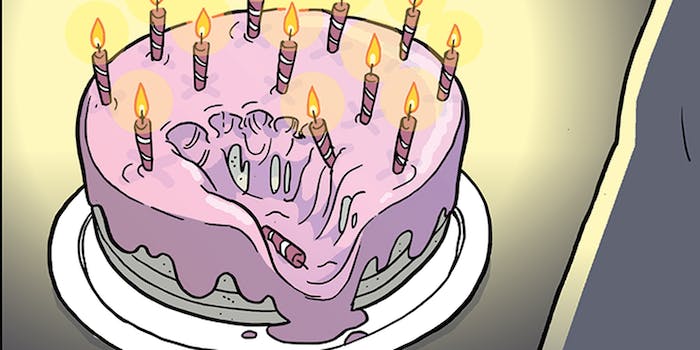 Homestuck will live on in Paradox Space

Homestuck will live on in Paradox Space.

Just when Homestuck fandom was mourning the lack of a birthday update on the webcomic’s fifth (and probably last) 4/13 anniversary, Homestuck creator Andrew Hussie announced a game-changing new site.

Over the past five years, an enormous fan community has grown up around Homestuck, spanning cosplay, fanfic, roleplaying, and a huge number of Tumblr discussion blogs. Paradox Space will allow other authors to post their own Homestuck stories as the official webcomic draws to a close.

The weird, impenetrable nature of Homestuck has led to it becoming a kind of mini-culture on the fringes of the more mainstream fandom community, with no one quite sure how to classify it. “Webcomic” seems OK, but but only because it feels kind of pretentious to describe it as a “multimedia storytelling experience.” Even convention organizers don’t know what to do with Homestuck. Its fans show up in droves to virtually every anime con, but it very clearly isn’t anime. Basically, Homestuck needs a place of its own. And that’s where Paradox Space comes in.

“As I work on finishing the story, I tend to think a lot about where Homestuck as a creative property goes from here,” wrote Hussie. “It’s hard to ignore the fact that it has turned into something much bigger than just a long, crazy story on the Internet. It has a lot of fans, and there’s a whole culture surrounding it. Friendships have been made, lives have been changed, or so people tell me. Those who like HS are extremely fond of the characters, yet those characters are trapped—”stuck” if you will—inside a very particular narrative, which itself has been at the mercy of my ability to produce it.”

“Paradox Space will feature many short comic stories involving literally any characters and settings from Homestuck. Any point in canon could be visited and elaborated on, whether it’s backstory, some scenes that were skipped over or alluded to, funny hypothetical scenarios which have nothing to do with canon events, or exploring things that could have happened in canon through the ‘doomed timeline’ mechanic that is a defining trait of Homestuck’s multiverse-continuum known as ‘paradox space.’”

The first comic is a birthday mini-story by comic artist Zack Morrison. Paradox Space isn’t so much an officialized fanfic/art archive (because people already have Tumblr and fanfic sites for that), as a kind of legacy to leave behind once Homestuck’s main storyline is finished. This way fans will still be able to explore the extended Homestuck multiverse in a similar format, but by a selection of new contributing webcomic authors. Don’t worry though—Hussie will occasionally drop in to tell a new Homestuck story of his own.