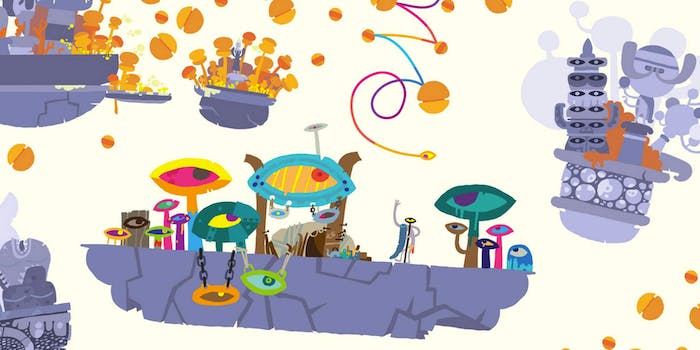 This game seems to be all about the aesthetic.

In any artistic medium, there’s always the struggle between vision and profitability. Ideally, you strike a balance: Something that’s visually stunning, yet still appealing to a broad audience. However, as things get more abstract, finding that balance gets increasingly difficult.

Hohokum, a new game from Honeyslug in collaboration with artist Richard Hogg, achieves that visual appeal, but it may be a bit too avant garde for most gamers.

You play a Long Mover, a colorful snake-like creature with a single eye. The controls are simple: You hold X to move fast, circle to slow down, and L and R to move really fast. They can also seem a little obtuse. Holding the L and R button can make you move rapidly in a circle. Alternately pressing L and R while moving make you go much faster in a line. The square button lets you blink, but doesn’t really adding much to the experience.

The objective of each level is a bit up in the air. The game never explicitly states a goal, but in some levels you can find that picking up characters or hitting certain objects will change something in the world. Sometimes it felt that things were there to interact with just for the sake of having something to interact with. Really, Hohokum feels more like art than a game, but with some stellar music thrown in.

Criticisms aside, the game is visually striking. Colors pop as weird-looking characters animate and jump around. Things are interesting to look at, but the overall structure seems shallow.

The music is really where the game shines. When interacting with a particular level, the music reacts and changes with your overall progression. Granted, because there isn’t a clear line of progression, it’s impossible to know if you’ve unlocked the fullest musical experience. Yet, the soundtrack is undeniably fun. If you fall in love with it, Amazon has it available digitally for purchase.

Like with most art, meaning is in the eye of the beholder. A lot of Hohokum seemed to come from concepts that were thrown in just for the sake of being there. There’s a lack of cohesion to the overall experience—but maybe that’s the point. Hohokum acts as a great diversion, something to mess around with for an hour or two. Beyond that, there really isn’t much to keep your attention. It must be noted that the game is a PlayStation Network exclusive on sale for $14.99. As far as games go, that’s a pretty poor return on investment. If the game were just a few dollars, it could be justified as an impulse purchase. But for now, it’ll really only appeal to the most artsy of crowds. It seems Hohokum will stand as a very divisive game; either you get it, or you don’t.