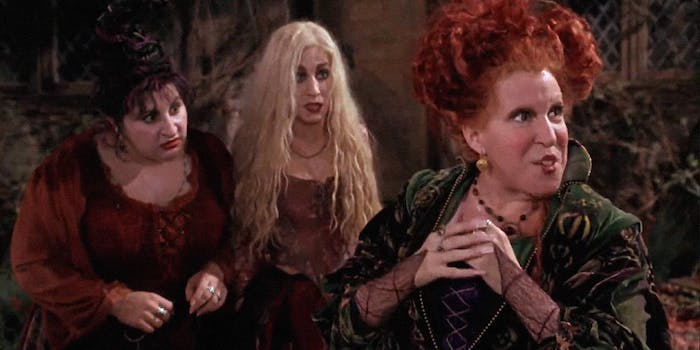 ‘Hocus Pocus’ is getting a Disney Channel TV movie remake

Will it put another spell on viewers?

More than 20 years after Hocus Pocus first cast a spell on audiences, the Disney Channel is planning to bring back the Halloween favorite as a TV movie.

Although the possibility of a sequel to the 1993 cult classic had been floated and supported in recent years—at least until star Bette Midler shot that idea down in 2015—this would be more of a remake of the original Walt Disney movie. The Hocus Pocus TV movie is in early stages with Scarlett Lacey (The Royals) writing the script and David Kirschner producing. So far Kirshner, who produced and came up with the story for the 1993 movie, is the only person to have worked on the original Hocus Pocus to work on the remake. A director has yet to be named.

None of the original cast members are attached so far, including Midler, Sarah Jessica Parker, and Kathy Najimy, although Midler and Parker expressed interest when the sequel discussion occurred online.

The original film followed the Sanderson sisters, three witches who were accidentally resurrected hundreds of years after their death in ’90s Salem, Massachusetts, and the kids who have to stop them from sucking out the souls of Salem’s children before sunrise.

It’s too early to tell how closely the Hocus Pocus TV movie will stick to the original. The original wasn’t a commercial success when released in theaters, but it’s since become a fiercely beloved cult classic, thanks in part to it airing annually around Halloween on the Disney Channel and Freeform.