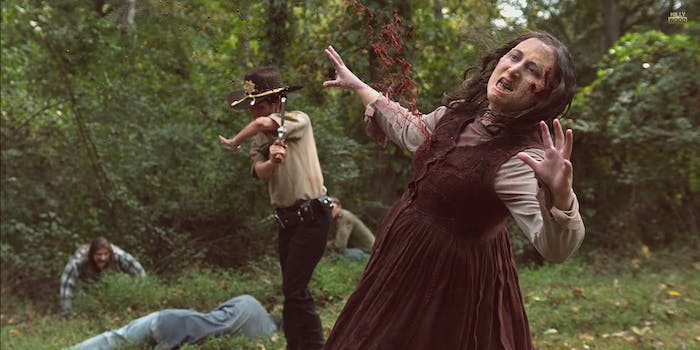 ‘Walking Dead’ parodies don’t get much better than this

Hannah and Hilly Hindi are back with their most elaborate geektastic parody yet.

Sisters Hannah and Hilly Hindi are the kinds of stars YouTube was designed to discover. Their YouTube channel, the Hillywood Show, made a name for itself almost solely through word of mouth and the high caliber of their viral fandom videos. Hannah, a self-taught director, usually takes backseat to Hilly’s chameleon-like cosplay, as she and an ever-growing cast of friends recreate and parody geek favorites like Pirates of the Caribbean and The Hobbit.

As their YouTube popularity has grown, so has the elaborate nature of their videos. Their Doctor Who parody, released in May, featured dozens of actors and their most complicated camera-work yet. In June, the Hillywood Show joined the Nerdist Alliance, and fans wondered what the sisters would do with their new, expanded resources.

Now the wait is finally over. This week the sisters released the Hillywood Walking Dead parody. Filmed in Georgia in the backyard of the actual Walking Dead set, the shoot lasted six days and involved a full production blitz: dozens of actors, makeup, costume design, special effects, choreography, the works. As usual, Hilly transforms into the main male role, playing an eerily convincing Rick Grimes. There’s even a cameo from Supernatural fan favorite Osric Chau, who shows up to play Glenn.

We already knew from Bad Lip Reading’s recent Walking Dead parody that zombies are always better with singing. But Hilly goes one better, by turning Rick Grimes into a badass singing and dancing zombie patrol officer—set to Queen for ultimate anthemic power. There’s even a West Side Story reference thrown in. Who’s your Poppa now, Carl?

If you enjoyed the parody, you can also go behind the scenes to watch the Hindi sisters’ elaborate production take shape.