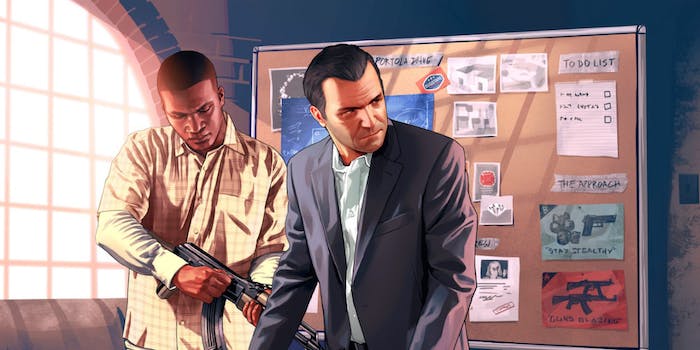 If you stopped playing the online mode of Grand Theft Auto V for lack of anything new to do, it might be time to tune back in.

Rockstar Games announced this week that the first content patch to hit Grand Theft Auto Online following the release of GTA V on the PlayStation 4 and Xbox One on Tuesday will include Online Heists. GTA Online players have been waiting for Heists since GTA V was released in September 2013 for the PlayStation 3 and Xbox 360.

In the story mode for GTA V our three anti-heroes—Franklin, Michael, and Trevor—engage in a handful of complex, multi-stage, and high profit heists that range from straightforward bank robberies to stealing high tech vehicles from the government. The manual for GTA Online lists Heists as “Full-on cooperative missions that will require careful planning, teamwork and sharp execution.” The manual for GTA Online also says Heists are “Coming Soon.”

Rockstar has released eight updates for GTA Online since launch on Oct. 1, 2013, some within weeks of each other. The longest interval between updates has been a little less than three months. Online Heists are probably a more substantial update than any released thus far, however, so the past release schedule might not apply per when players should expect Heists to arrive.

Rockstar also shared an extensive infographic about player activity since the launch of the GTA Online on Oct. 1, 2013 and Oct. 30, 2014. According to Rockstar there are 33.8 million players of GTA Online in total from 224 countries, who have collectively sank 2.3 billion hours into the persistent online world of San Andreas. That’s a whole lot of people who have been patiently awaiting the arrival of Online Heists.

The long-standing absence of these complex robberies in GTA Online made sense on June 9, however when Rockstar announced the upcoming next-gen versions. The studio must have had its hands full preparing these re-releases, which are practically being marketed as if they are entirely fresh releases. Releasing Online Heists for all four platforms simultaneously means that PlayStation 3 and Xbox 360 users won’t feel like they’re being denied content, and that’s just good business.