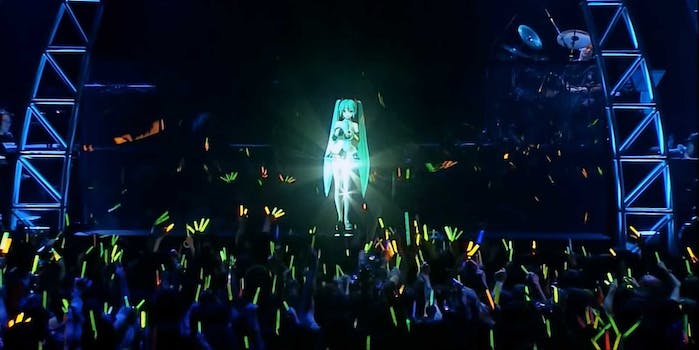 Lady Gaga has joined forces with what may be the only international pop star big enough to upstage her.

My favorite digital pop star Hatsune Miku is opening The ARTPOP Ball from May 6-June 3! Look at how cute she is! http://t.co/XZr1nKGM2Q 🌟?

It’s not unusual for Gaga to team up with local stars while on tour. Just last month she turned heads by announcing that K-pop band Crayon Pop would be joining her in her South Korean tour dates for her upcoming ARTPOP ball tour.

But that’s not the notable thing about this announcement. Although Miku is so popular that she’s performed multiple sold-out concerts in Japan and overseas, and although she’s performed more than 100,000 separate recordings on and offline, she’s not actually real.

Miku is a hologram. Before that, she was a software program, part of the massively popular Vocaloid software that lets users create and synthesize their own songs and vocals. Each Vocaloid vocal track comes with its own named character. Users have created massive fandoms around their favorite Vocaloid characters, based on each character’s sound and persona.

Miku, a fictional 16-year-old with teal hair and a cheerful personality, first ballooned to popularity in 2007. She’s been a chart-topper ever since, starring in her own video game series, selling out tours, and schilling for Google and Domino’s pizza.

Gaga’s ARTPOP tour starts next month in Florida. Gaga fans lucky enough to get early tickets to the ball will be getting a firsthand glimpse of Miku, who will open the first month of dates from May 6 to June 3 in select U.S. and Canadian cities.

Although many Americans may not have heard of the virtual popstar, the spectacle of a 5-foot-tall glowing green hologram performing with a live band will probably be plenty of entertainment for Gaga fans. Oh, and Miku will be onstage, too. (haha)