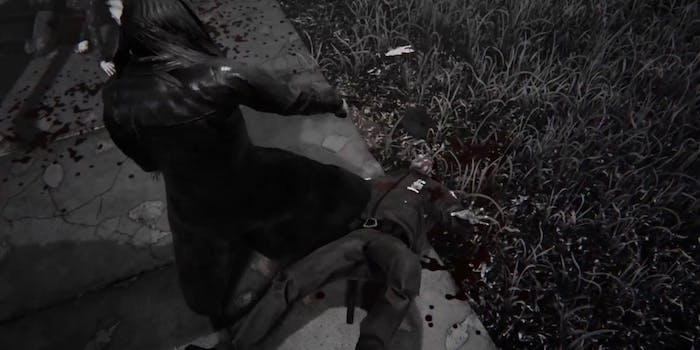 Fans rejoice and critics grumble at the quick reversal.

Newell, a cult figure in the PC gaming world, reversed his company’s decision to pull Hatred from Valve’s digital distribution service, even going so far as to apologize personally to Jarosław Zieliński, the Polish CEO of Hatred developer Destructive Creations.

“It turns out that [pulling Hatred] wasn’t a good decision, and we’ll be putting Hatred back up,” wrote Newell. “My apologies to you and your team. Steam is about creating tools for content creators and customers.”

Here is the latest trailer for Hatred, which Destructive Creations produced to promote its availability on Steam Greenlight, the service’s community-voting platform for fast-track game approval.

“You will go out for a hunt, you will clear the American soil off [sic] humans with cold blood,” reads the Steam Greenlight page for Hatred. “You will shoot, you will hurt, you will kill, you will die. There are no rules, no compassion, no mercy, no point of going back. You are the lord of life and death now and you have the full control over lifes [sic] of worthless human scum.”

When Valve pulled Hatred from Steam, everyone assumed that it was because the company didn’t want to host a title that was, for all intents and purposes, a mass-shooting simulator. Epic Games, developer of the Unreal Engine on which Hatred is based, distanced itself from Destructive Creations almost immediately after the first trailer revealed. As a result, the developer had to remove references to the Unreal Engine in advertisements for the game.

Valve didn’t give a specific reason for its removal of Hatred on Dec. 16. “Based on what we’ve seen on Greenlight we would not publish Hatred on Steam,” said Doug Lombardi, Valve’s vice president of marketing, in a statement to the press. “As such we’ll be taking it down.”

Hatred has become a battleground in the vicious culture war taking place within the videogame world. Some comments on Hatred’s Steam Greenlight page are interpreting the game’s reinstatement as a blow to SJWs, or social justice warriors, a derogatory term for progressive-minded video game critics and cultural observers.

Hatred has also become the focus of a conversation about moral censorship. This context, some commenters see value in Hatred‘s repugnant premise.

Critics of Hatred are also having their say on the game’s Steam Greenlight page. At a time when mass shootings are becoming depressingly commonplace, a game that simulates such an event is naturally going to concern many people.

“People are complaining that our game is so bad because they don’t see any… motive? They don’t see any reason why our main hero is doing this,” Zieliński told the Daily Dot in an interview published on Nov. 13. “But to me, it’s stupid, yes? Because why they would accept the way, I don’t know, we would write a story that he lost his family or something, and suddenly all his deeds will be justified?”

“You know, the usual example is [Grand Theft Auto], where you are killing a lot of people during the story, and people somehow justify all these murders, killing policemen and all this stuff,” said Zieliński. “But let’s look at this as, main characters are killing because of their greed. To make money, or to become better gangsters. I don’t know how people can think it’s good justification for killing people.”

“Suddenly, a game is created where my character is just doing the same stuff, but because he just fucking hates everyone,” Zieliński continued.
“And I don’t see really a big deal of it. I think I prefer, a little, the honest ways of our character, who kills because of his emotions, not because of his greed or something.”

With Newell’s about-face, Hatred will likely see the light of day on Steam after all. It is currently slated for a Q2 2015 release.