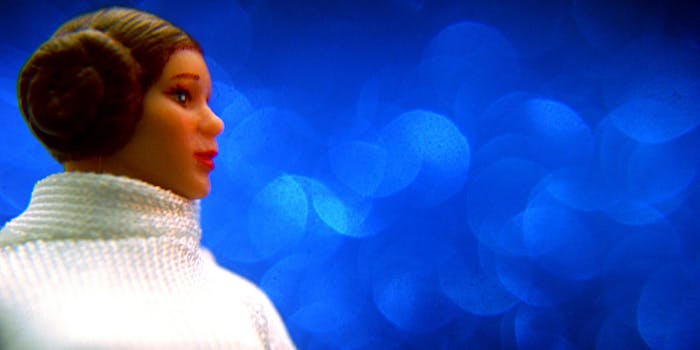 Yes, there will be a Princess Leia action figure.

Star Wars fansite Jedi Temple Archives on Monday shared new information from one of its sources about Hasbro’s Star Wars Black Series action figures. According to Jedi Temple Archives, waves seven and eight of the Black Series are going to be replaced by different figures. The most notable change was the loss of a Princess Leia figure in each. Reportedly in wave seven a New Hope Princess Leia ceremonial figure was going to be replaced with a stormtrooper and in wave eight the ceremonial figure was being replaced by a clone commander.

The Daily Dot reached out to Hasbro to clarify what had happened and received the following statement late Wednesday from Hasbro’s PR agency:

That the figure hasn’t been canceled is welcome news and made quite a few fans happy, but the fact that there was such a response from the fandom at the loss of the figure speaks to how hungry Star Wars fans are for better representation in merchandise. If Leia figures were more common, the loss of one in a wave would not have sparked such a strong outcry. Princess Leia and other Star Wars female action figures are still hard to come by, however, so a possible cancellation is viewed as a major loss to the fandom.

While it’s great that Hasbro responded quickly and does not plan to forget about Leia entirely, it should take note of how fans reacted and might want to consider rethinking its handling of female figures.

The initial reports of Princess Leia’s exclusion in particular did not go unnoticed by fans. Word quickly spread about the loss, being shared on Star Wars collectors fansite Yakface and sparking conversation on Twitter and Tumblr.

“I am so angry at this. Disappointed isn’t a strong enough word. Didn’t we fight for #WeWantLeia and even had #WeWantHera and #WeWantSabine over the past year? How long are these damaging stereotypes (for all genders as kids should be allowed to play with any type of toys or read/watch any story they want regardless of the targeted gender) going to last?” wrote French scholar Natacha Guyot on Tumblr.

Princess Leia is not in Black Series waves 7 and 8. 😭 What has happened to this world?!?! #WeWantLeia #WhereisLeia pic.twitter.com/kAqK8Huzey

WTF @Hasbro! You make it impossible to find the #StarWarsRebels figures (cough I'm looking at you Hera/Sabine) and now Leia?!? #WhereIsLeia

This time, at least, these long-suffering factions can reportedly look forward to a proper action figure.