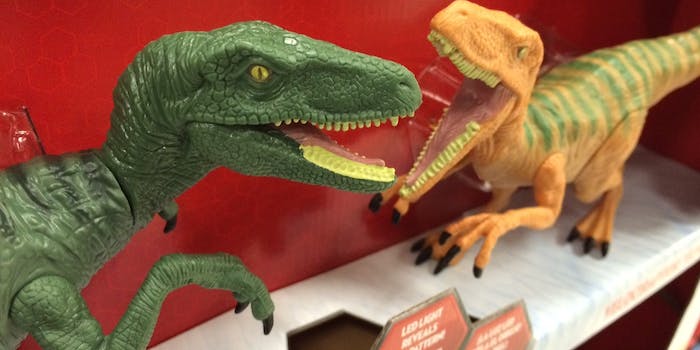 Hasbro has run into trouble once again for marketing solely to a demographic of young boys—only this time, it’s the female velociraptors of Jurassic World who are having their gender erased.

Ever since a Guardian reviewer said the film passed the Bechdel Test because the female raptors existed, they’ve been used as a kind of hilarious stress test for the absurdity of gender in Hollywood. Now, they’re serving as one of many, many examples of infuriating, sexist marketing.

The Geekiary reported Wednesday that Hasbro is marketing the toys as though the female raptors are actually male. We made a quick trip to Target to investigated the situation and found the toy boxes don’t actually reference the raptors genders.

But here’s how the Hasbro website describes a toy version of one of the female raptors, a fierce lady named “Blue”:

Clever as ever, Jurassic World’s velociraptors are masterful hunters. And this awesome figure looks just like Velociraptor “Blue”! He’s ready to team up with his fellow Velociraptors (other figures sold separately) to hunt the ultimate predator! His slashing claws and growling attack will destroy anything in his way. Let the hunt begin with your Velociraptor “Blue” figure!

Sheesh. Given how famous the line “Clever girl” is from the original movie, you’d think that even a lowliest intern at Hasbro would think twice before mis-gendering the dinos. There’s an entire scene in Jurassic Park dedicated to explaining that all of the dinosaurs are engineered to be female in the lab, and there’s no indication that this has changed in Jurassic World. We thought this was beyond argument. But, as Ian Malcolm might point out, life (and Hasbro’s marketing department) finds a way to turn female movie raptors into male raptor toys for boys.

As we’ve learned from our many, many previous trips down Sexist Toy Marketing Lane, the pattern seems to be “commit sexism first, backtrack only after sustained public outrage.” Behold, the circle of life.

So how soon will we see the “raptor squad meme” flipped to portray a horde of indignant female velociraptors coming after Hasbro?