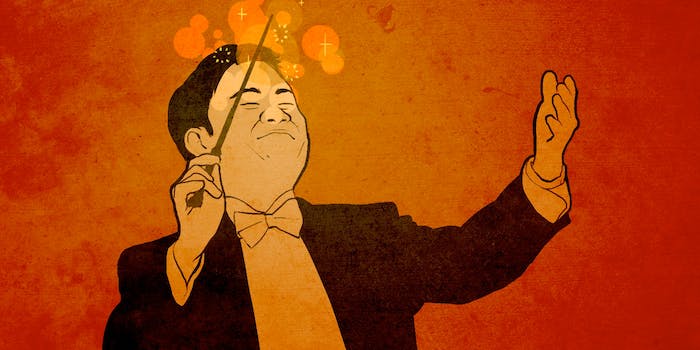 It still hits after all these years.

From the moment we first heard “Hedwig’s Theme,” a leitmotif that originated in Sorcerer’s Stone nearly 15 years ago and is the sole piece of music most associated with the Harry Potter films, we knew it was something special.

It was light and whimsical, the perfect theme from famed composer John Williams—already responsible for creating some of the most iconic scores of our childhood—to introduce us to Harry’s wizarding world. Even though other composers would work on the later films, they always incorporated “Hedwig’s Theme” into their own scores.

Harry Potter fans revisited the song over the years when watching the films on repeat, listening through music players, ringtones, and even the occasional filmed orchestral perform, but as many who have been in the room (or amphitheater) where it happens, it’s a completely different experience when a live orchestra plays it right in front of you. 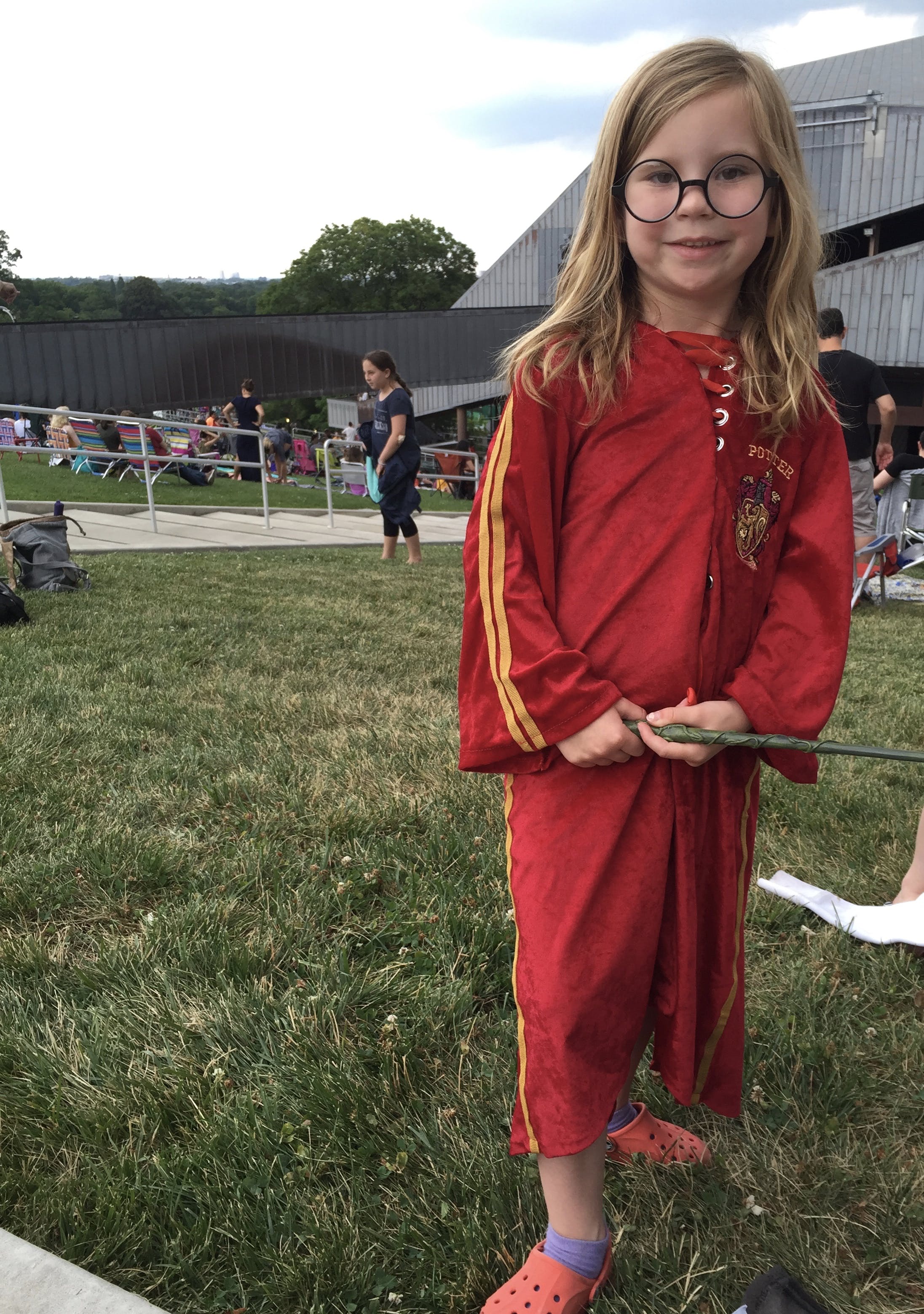 On Thursday night, Philadelphia’s Mann Center kicked off the start of the “Harry Potter Film Concert Series” with a live performance of Sorcerer’s Stone by the Philadelphia Orchestra. Nearly 11,000 people had purchased tickets beforehand, many of them located on the great lawn, braving the elements and sitting through a steady rain during some of the performance.

“I was expecting a lot more robes and a lot more people dressing up, but I think the weather definitely did not help,” Ryan Green, who was decked in a Slytherin uniform, told me. 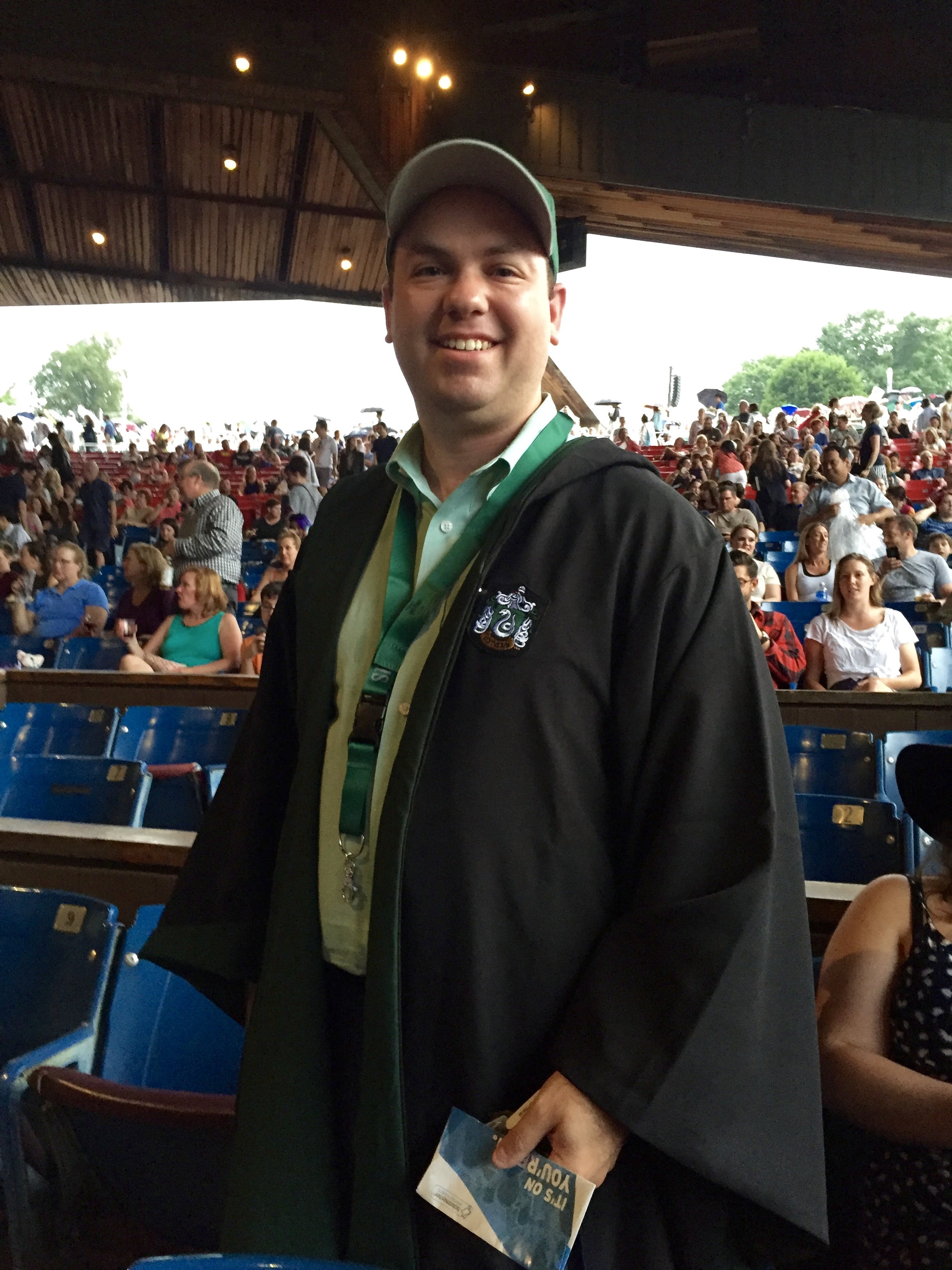 I saw the occasional Hogwarts scarf, which were available for purchase at the merch table. But, on a warm, muggy night in Philadelphia, some fans opted for Muggle (or No-Maj, if you’re starting to adapt to the American slang that will appear in the upcoming Fantastic Beasts movie) Harry Potter T-shirts instead. Friends came together, young children brought their parents along, and some parents were giving children an early introduction to the Boy Who Lived. And it wouldn’t be a proper Harry Potter event if wands weren’t at the ready. 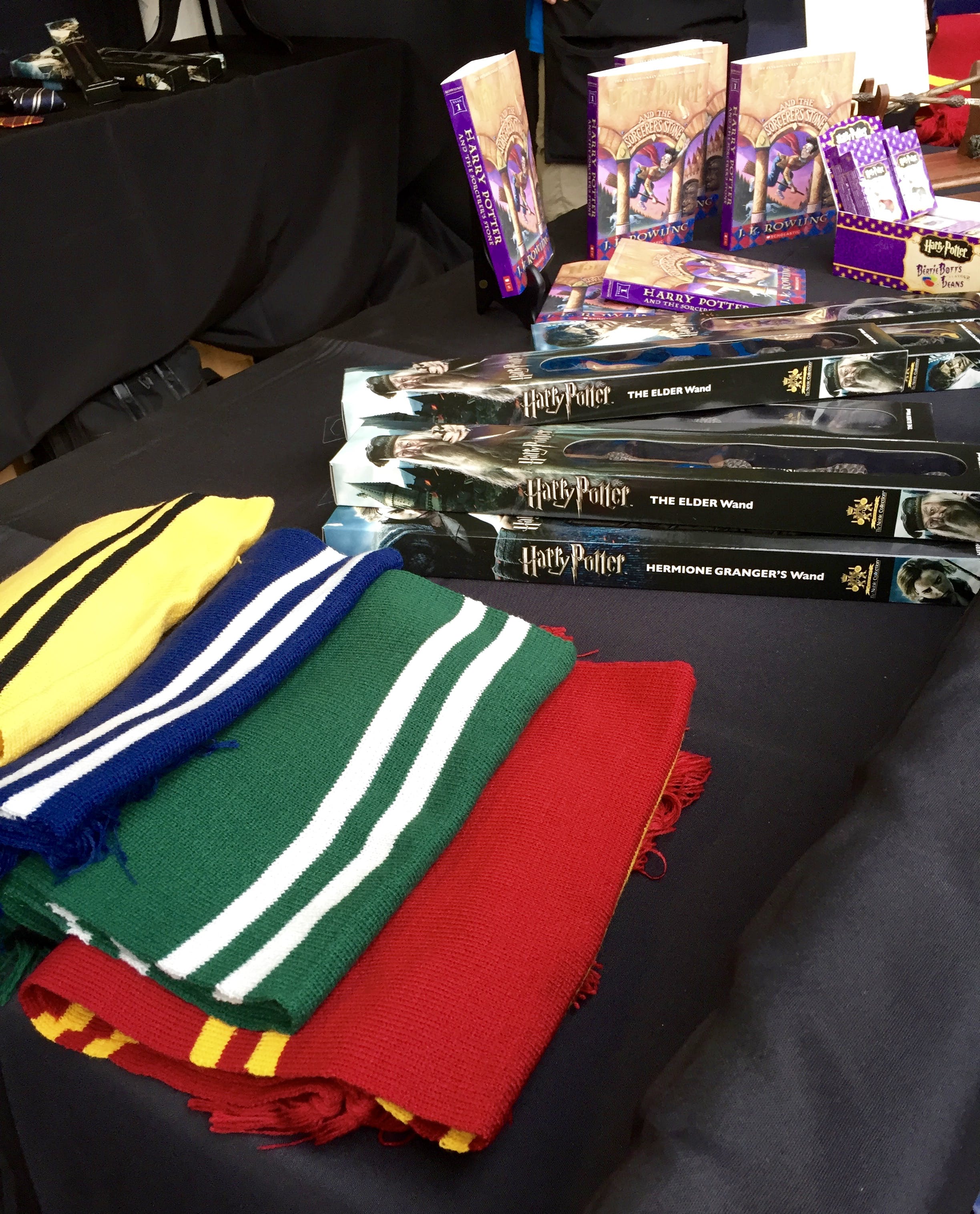 For some fans, it’s been a very long time since they’ve had the chance to celebrate in such a fashion. Conventions are few and far between—and expensive. The Wizarding World of Harry Potter can seem a world away, though even more information on Harry’s life and the world he lived in has trickled in intermittently thanks to J.K. Rowling’s Pottermore updates, leading to debates about whether her new revelations should even count as part of the Harry Potter canon.

A bit of healthy fan debate is only the beginning. Harry Potter and the Cursed Child is hitting bookstores next month, sparking the kind of midnight parties around the world that we haven’t seen since 2007, and Fantastic Beasts’s theatrical release in November will likely have midnight screenings—a staple of most major blockbusters.

What it also presents, regardless of how you feel about Rowling returning to Harry Potter after all this time, is a chance for the next generation to experience what the Harry Potter generation did.

Holly Scolari was first introduced to Harry’s world at age 4 when she was first shown the movies while her friends Angela, Kristen, and Jillian Dilworth (sisters), didn’t experience the magic until later. They each wore the words of a Hogwarts house so when lined up they could recreate the Sorting Hat’s song, and only one of them had seen a live orchestra play before seeing Sorcerer’s Stone. 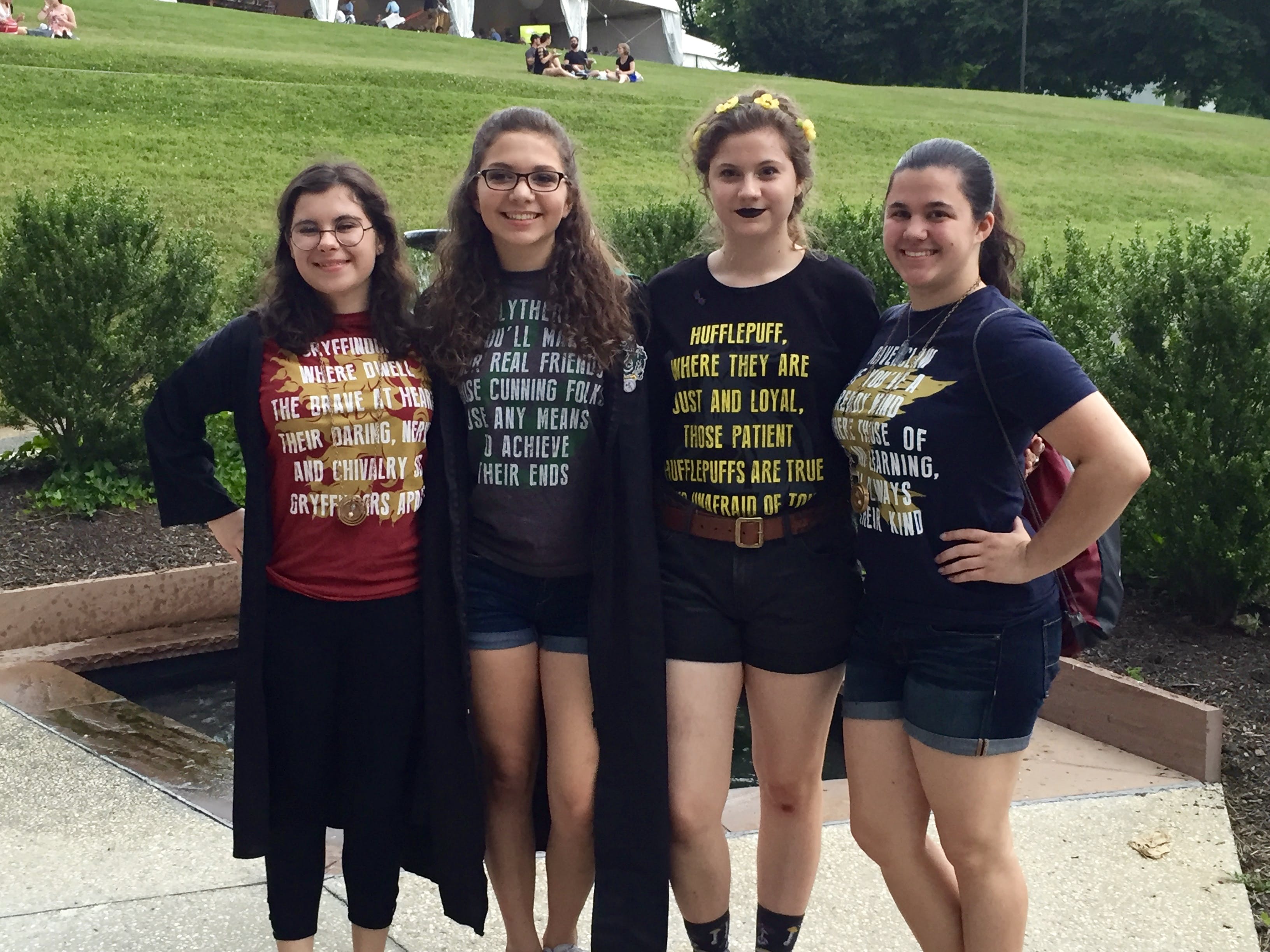 “I wasn’t allowed to read them until freshman year, so then I read [the Harry Potter series] and got everybody else into them,” Jillian explained.

While they were unfamiliar with midnight book release parties, they’ve already planned to go see Fantastic Beasts once it came out.

No matter where I looked, the excitement among fans of all ages was palpable. It’s the kind of thing you can sometimes forget about after years of cynicism and hyped up reveals that didn’t quite land.

The audience applauded throughout the movie during certain musical entrances and themes—Harry catching the Snitch in his mouth to win the Gryffindor–Slytherin Quidditch game produced a particularly enthusiastic cheer—and the Philadelphia Orchestra’s performance was so seamless it was easy to forget that, yes, there was live music.

Most of the movie features music in some regard, and the Philadelphia Orchestra played it all, with Hagrid’s wooden flute rendition of “Hedwig’s Theme” being the sole exception, as far as I could tell.

The audience loved each victory; triumphs which were especially prevalent in a story that’s a bit lighter in tone compared to its sequels. And yes, I cheered right there with them. Harry Potter is a fitting movie to be performed this way, but the community that brought everyone together has just as much to do with it.

Most of the crowd stayed until the end to listen to the orchestra play the entire end credits music, and they gave conductor Justin Freer and the entire orchestra a standing ovation. As I left, I overheard people already planning to return next year when the orchestra will perform the score for Chamber of Secrets. 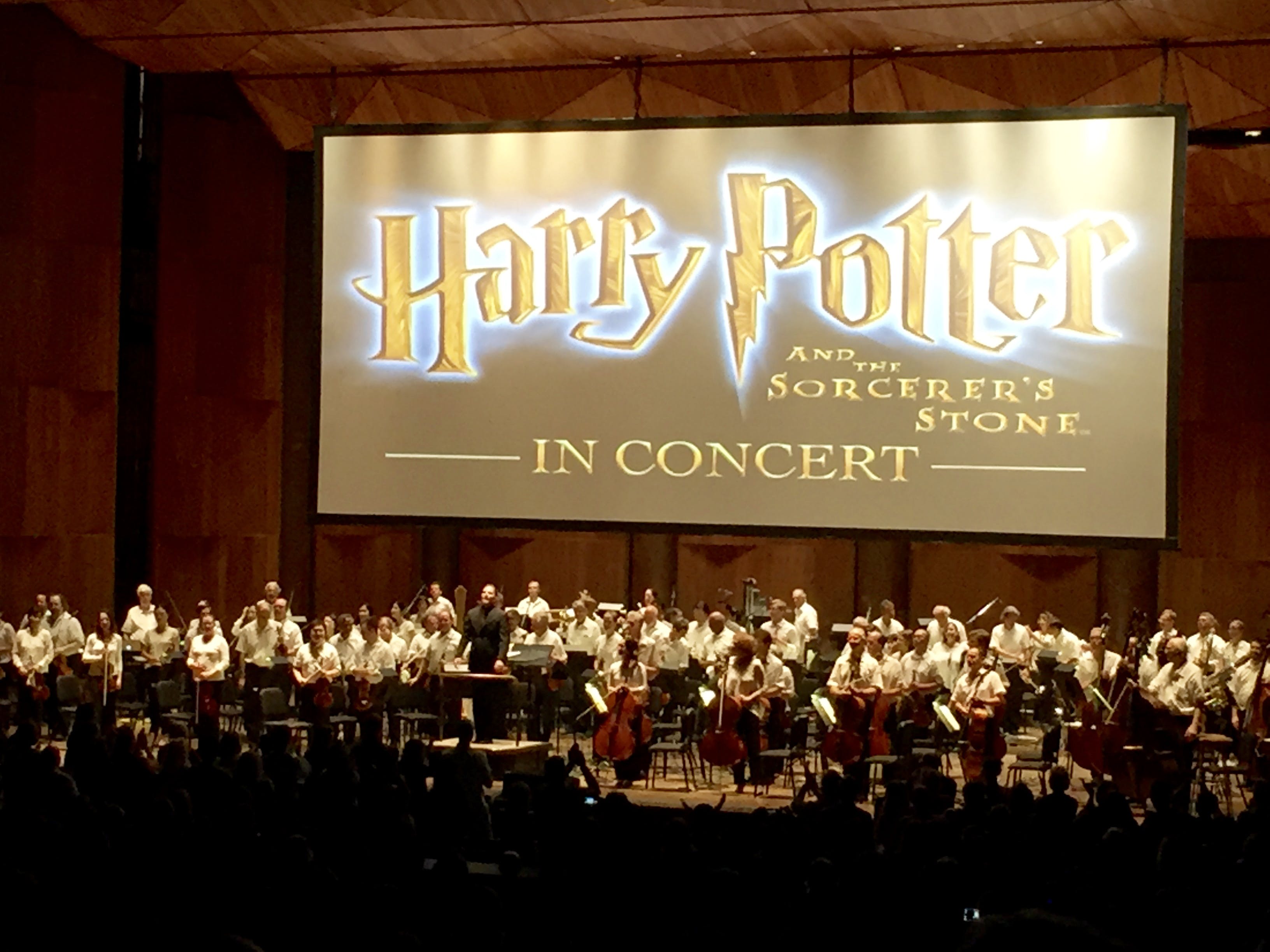 The music tugged at my heartstrings and even though I’ve seen the movies and read the books countless times over the years (albeit not in years), the magic was still there. For a couple of hours, any issues I had with the adaptation itself had dissipated. I initially had forgotten I even obtained a ticket for this, but I was now looking forward to future events.

It didn’t take much to recapture that spirit, now that I thought about it. The conductor picked up his non-magical wand, signaled the musicians to play, and then I was home.