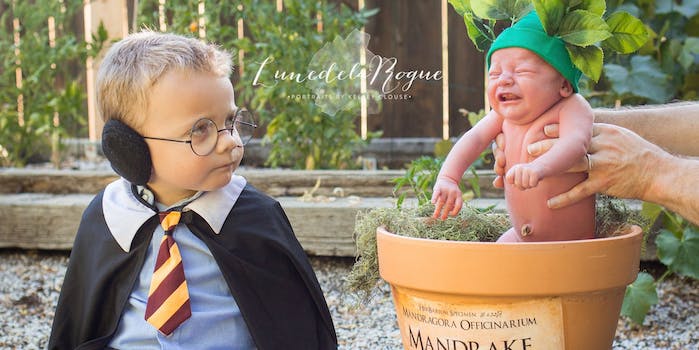 This baby mandrake will make you go 'aw!'

This family’s Harry Potter-themed newborn photo shoot is casting a spell on people around the world. Take one look at the photos and it’s not hard to see why!

The portraits, shot by Kelsey Clouse of Lune de la Rogue Photography, feature Katherine and Jesse Oldfield’s sons Sebastian dressed like a cute Gryffindor and their newborn Theodore adorably decked out like a mandrake, a magical plant in the wizarding world that has a root which looks like a baby.

According to BuzzFeed, the Oldfields are big Harry Potter fans who spent their first Halloween dressed as Harry and Hermione. They also held a previous Potter-themed photo shoot for Sebastian when he was 8 months old. Katherine told BuzzFeed she “knew it was key that Theodore be crying for the shot.” Clouse was able to get what she called the “magic moment” when his dad started to lift him from the pot. Luckily this little mandrake isn’t mature enough to have a fatal cry! The images have gone viral since being shared online and the photo shoot has been covered by multiple outlets. The photo of both Sebastian and Theodore shared by Lune de la Rogue Photography on Facebook already has more than 54,000 likes, 89,450 shares, and 18,000 comments as of this writing.

We wait eagerly for the photo shoot showing these little wizards wearing the Sorting Hat as they enter Hogwarts!