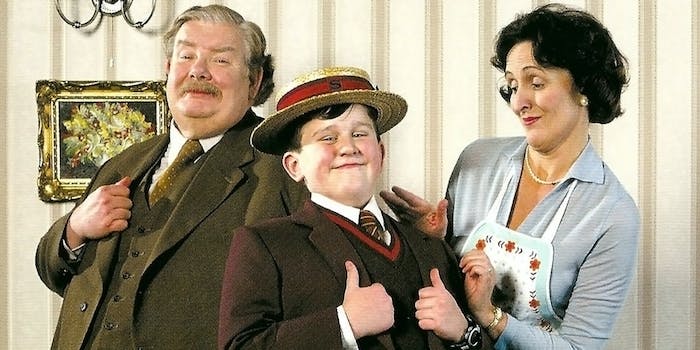 Entertainment Weekly just gave us our first taste of Fantastic Beasts and Where to Find Them, publishing photos of the main cast and one tantalizing detail from J.K. Rowling: the American term for “muggle.”

In Fantastic Beasts, the witches and wizards of 1920s New York instead say “no-maj,” a shortened form of “no magic.” And judging by social media, Harry Potter fans hate this idea already.

I just found out the U.S. equivalent of "Muggle" is "No-Maj" and I want to die

you say "no-maj", i say "get the hell out of my sight. What are you doing. theyre called muggles, go home" https://t.co/jeqLTgDuIn

But let’s be real here: “no-maj” does not sound any sillier than “muggle” did the first time round.

J.K. Rowling loves wordplay, as proven by her decision to name a werewolf Remus Lupin (approximate translation: “Wolfy McWolf”) or dream up puns like Knockturn Alley and “pensieve.” Most of the names in Harry Potter are either puns or mythological references, often with a Dickensian twist that illustrates a character’s personality: Draco Malfoy, Severus Snape, and so on. It’s no surprise that Rowling wanted to invent some new slang for the very different setting of 1920s New York.

“Muggle” somehow sounds very British; a cuddly, Roald Dahl kind of word. In wizarding Britain, it has probably been in use for centuries, and it’s easy to imagine American wizards opting for something more businesslike and literal, like the transition from “pavement” to “sidewalk.” Plus, “no-maj” sounds pretty reasonable compared to the ridiculous Jazz Age slang terms that people used in real life:

As EW pointed out, “muggle” has been in the Oxford English Dictionary for more than a decade. It’s such a familiar word that much of the hatred of “no-maj” probably stems from resistance to change. But if we could get used to saying words like “quidditch” and “Hufflepuff” with a straight face, we can certainly grow to love “no-maj.”