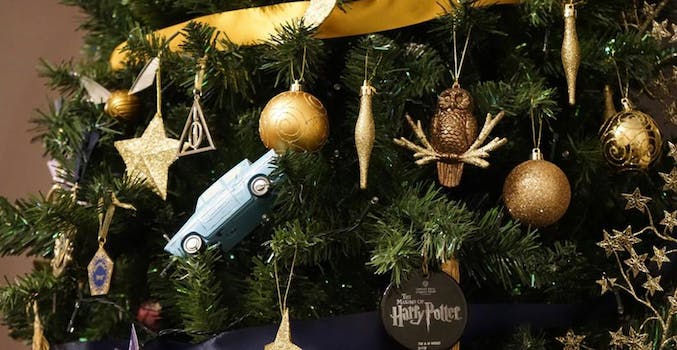 We'd leave this incredible tree up all year round.

Christmas has always been a magical time for Harry Potter fans. The halls of Hogwarts always sparkle with decorations, delectable treats flow, and Mrs. Weasley makes sure Harry and the gang receive heartfelt (if a little frumpy) homemade scarves and sweaters.

While we can’t all spend Christmas at Hogwarts, one fan did the next best thing and brought a little Harry Potter magic into her home with a stunning Potter-themed Christmas tree.

Not only is the tree decorated with special ornaments, including the Hogwart’s crest, the Marauder’s Map, a stag symbolizing Harry’s patronus, and familiar round glasses, but there are already presents stacked up (including Harry’s beloved Firebolt!).

The fan behind the impressive display is Kathryn Burnett of Seaham, England, and she shared photos of the tree on her Facebook page. The 29-year-old told BuzzFeed that it’s the second year she’s assembled the tree, after realizing what a shame it was leaving her Harry Potter treasures packed away in boxes. The pixie hanging on to the Sorting Hat atop the tree is Burnett’s favorite decoration.

And lest you still have any lingering resentment against Slytherin House, be advised that this Christmas magic is brought to us by a proud Slytherin. The holidays really do bring us together.