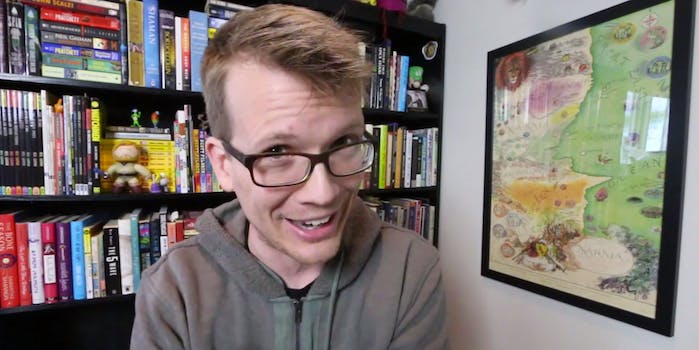 Vlogbrothers will start their own con in October

Do we really need another geek convention? When the Vlogbrothers are involved, the answer is always yes.

The Vlogbrothers—novelist John Green and performer/science nerd Hank Green—have long sat at the center of a vast YouTube network, the core duo linking a number of geeky subcultures.

So it only makes sense that now Hank Green has founded a new convention that appeals to his admittedly broad-ranging interests.

On his weekly Vlogbrothers update Friday, Green announced the creation of NerdCon, a new two-day convention to be held in Minneapolis this fall.

The convention will be themed “Stories” (as in NerdCon: Stories) and will be held Oct. 9–10 at the Minneapolis Convention Center. Judging by the guest lineup, the con is targeted at fans of speculative fiction (sci-fi/fantasy/horror) and Young Adult literature, as well as gaming, podcasts, and other geek-friendly areas.

The con’s website went live in conjunction with the announcement and briefly crashed under what we can only assume were thousands of Nerdfighters lining up to reserve a spot at what Green modestly predicts will be a “small” con.

Given how many irons the Greens have in the fire, it seems unlikely this small con will remain that way. Hank pointed out that “NerdCon: Stories” might possibly undergo theme changes from year to year, which would perfectly fit the Green brothers’ wide-ranging interests. Together they helm numerous science and educational channels on YouTube, like the popular SciShow. They direct the community around YouTube’s central industry and community conference, VidCon, which they founded in 2010 and which had a whopping 17,000 attendees last year.

The Green brothers also have ties to the Harry Potter fandom and its offshoots. Hank has performed with numerous Wizard Wrock bands and both have partnered with the progressive nonprofit Harry Potter Alliance. Hank also founded the successful transmedia company Pemberley Digital, with its popular retellings of classical stories like the Lizzie Bennet Diaries, which won an Emmy in 2013.

And last but never least, they commandeer their own massive Nerdfighters fanbase, often in pursuit of socially progressive activities like annual fundraising, political awareness, and general awesomeness.

In addition to the guest lineup, the NerdCon website also includes a broad wish list of activities that attendees can potentially look forward to.

The convention’s new Tumblr noted that these ideas were still in-progress, and that “We’d love to get as many attendees as possible directly involved in public storytelling at the event.”

After all, it’s the foundation for all those fan bases that already have conventions—Trekkies, Whovians, etc. It’s not just a show, or a book, or a movie that brings these people together—it’s a shared story. And that’s kinda beautiful.

#NerdCon is all I care about rn

Though the idea of another con might seem uninteresting for fans who have hitherto had plenty of opportunities to see the Green brothers at VidCon, and frequently at LeakyCon (now GeekyCon), it’s the natural next step for a brand which has always had close connections to fandom. Moreover, the open-ended theme leaves room for expanding the con’s focus and making it more accessible to more people, all without losing touch with their core Nerdfighter fanbase.

The October date may be a tough call for some die-hard geeks, as the con clashes with New York Comic Con on the East Coast as well as Geek Girl Con on the West Coast.

But for those lucky enough to make the trip, NerdCon promises to be a classic Green brothers event: fun, nerdy, and hopefully the start of bigger things to come.