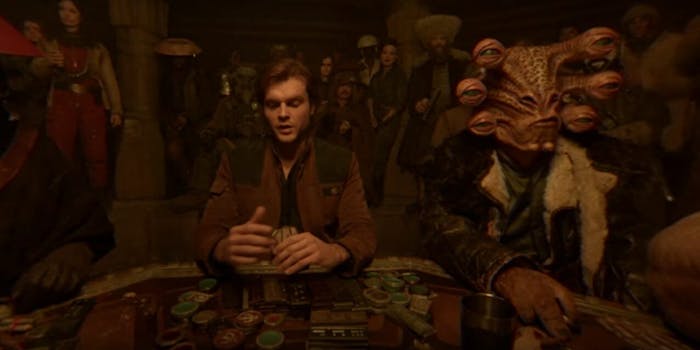 Immerse yourself in this iconic scene from 'Solo: A Star Wars Story.'

In honor of Star Wars Day, we’ve got a unique new look at Solo: A Star Wars Story. It’s a clip from Han and Lando’s famous game of Sabacc – you know, the one where Han supposedly won the Millennium Falcon – and this time, you can watch it in 360 degrees.

As with other 360 YouTube videos, it’s best to watch this on a mobile device. You can physically turn and view the scene from any angle, getting a better look at background moments you won’t see in the actual movie. Pretty cool, right? (And if you’re a spoiler-phobe, don’t worry. This clip is pretty short, and doesn’t spoil anything.)

While most of Solo covers new material, the Sabacc scene is one of two iconic moments we’ve waited a long time to see. The other is the Falcon’s journey through the Kessel Run, which it may or may not have completed in 12 parsecs. Whatever that means.

Solo comes out on May 25. Tickets went on sale today!