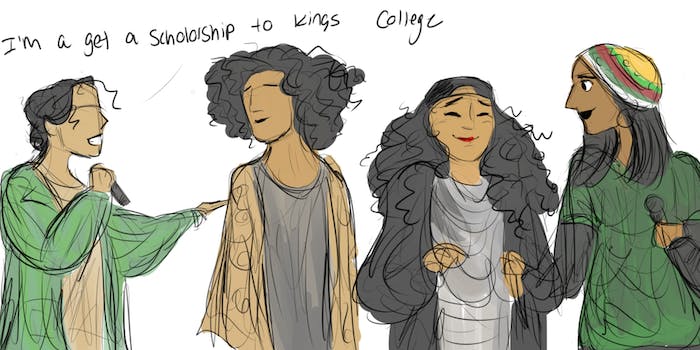 Fanartists are already capturing the moment.

Starting Tuesday, the famed Hamilton ticket lottery pre-show #Ham4Ham will be moving indoors. The day-of lottery itself will be transferring to digital for the winter, while creator Lin-Manuel Miranda has promised to take the #Ham4Ham performances backstage as the crew regroups and gears up for their spring shows-before-the-show.

1) Like Washington's soldiers, we're taking a winter break.
The $10 lotto will be online til then.
THERE'S MORE!
https://t.co/CElRphl6qe

2) The #Ham4Ham show will also go digital during this time: I'm a make you some videos from inside the building! https://t.co/CElRphl6qe

3) When we come back in March, WE WILL HAVE A SLAMMING NEW AUDIO SYSTEM FOR THE HAM4HAM SHOWS. https://t.co/CElRphl6qe

I promise.
Think of this as the end of our Off-Bway Ham4Ham run. We're gonna take two months and make it better. https://t.co/Nt0iZXupPw

Miranda also hinted that the #Ham4Ham pre-shows would also be a part of the show’s highly anticipated upcoming Chicago production. The New York lottery should return to the street once more in the spring. In the meantime, New Yorkers can battle to enter the online lottery daily, starting Tuesday at 9:30am.

In true Hamilton form, the popular #Ham4Ham pre-show didn’t go quietly into the winter night. On Sunday, the Hamilton ensemble cast gave fans assembled for the lottery what was arguably the biggest pre-show ever: a genderswapped performance of the showstopping number “My Shot” featuring members of the female ensemble playing the main roles of their male counterparts.

The backstage rehearsal was just as exciting:

Fans were so excited by this ebullient performance that #Ham4Ham has been a Tumblr trend throughout the day:

The joyous number has spawned an outpouring of genderbent and girl-centric fanart from Hamilton fans on Tumblr and Twitter.

Morgan Marcell, an ensemble understudy who rapped the part of Alexander Hamilton during the number, made her own special impact on fans:

Today's warm up is @morgankei as Hamilton because she's a babe and I need an lady production, like, now. pic.twitter.com/or6zQtpGv8

While it may be a few months before we see the cast on the curb of 46th Street again, at least we can rest assured that the Hamilton fandom will continue to bring the show to the Internet.