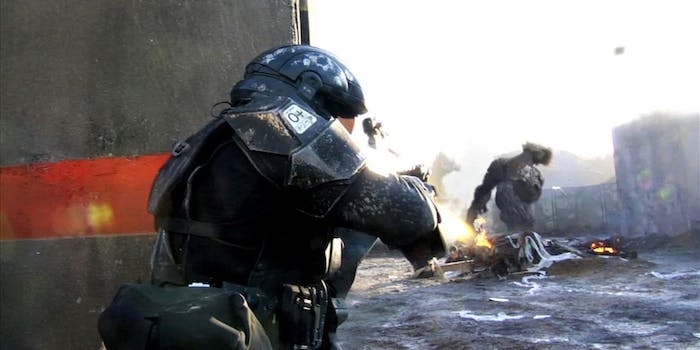 The history and future of ‘Halo’ live-action projects

At E3 2013, Microsoft announced that Steven Spielberg would be executive producing a Halo television series for Xbox Live. But it was production photos from a different Halo live-action project that leaked online earlier this month. It turns out there’s another Halo project in the works, which Microsoft later confirmed to be a “digital feature” produced by Ridley Scott.

Let’s clear up what we know so far about the difference between the two projects, and why Halo fans ought to be excited about both.

Bonnie Ross, the studio head of 343 Industries, shared some details about the Ridley Scott-produced Halo series, currently being shot in Belfast, Ireland, at Microsoft’s E3 2014 press conference. The series is called Halo Nightfall, and will introduce the protagonist of the upcoming game Halo 5: Guardians.

Nightfall will be an episodic series that Microsoft anticipates will be feature length if you watch the episodes back-to-back. It sounds a lot like the Forward Unto Dawn webseries which aired in 2012 and acted as an introduction to Halo 4.

Microsoft shared no specifics about the Halo television series being executive produced by Steven Spielberg, which is an entirely different Halo live-action project. We don’t know how this series will be distributed, other than via Microsoft’s Xbox Live service.

On May 13, Microsoft removed the required Xbox Live Gold subscription to access video-on-demand services offered on Xbox Live like Netflix, HBO GO, and Twitch. Conventional wisdom is that Microsoft intends the Halo television series as a way to attract users to the Xbox One as an entertainment center. Removing the paywall to access these entertainment choices furthers that goal.

The Halo story has grown past its original premise with the release of Halo 4, but the original story of the Halo franchise is apocalyptic. When a religious alliance of aliens known as the Covenant discover humanity, the Covenant’s religious leaders decree that the human species is an affront. Over the course of 28 years, the Covenant use their vastly superior technology to obliterate humanity’s colonies, killing billions upon billions of people.

The hopelessness of the first five games in the Halo series is juxtaposed with the sort of heroism you’d expect from the protagonists of traditional video games. Nowadays we have anti-heroes aplenty, but the star of the Halo franchise, Master Chief, is all hero. There’s a darkness to his character, however, in that Master Chief was kidnapped and pressed into the biological super-soldier Spartan program which created him.

Without the Spartans, specifically without Master Chief, there’s no way humanity could have prevented its extinction, so was the Spartan program justified? That question is demonstrative of the moral ambiguity which extends beyond Master Chief and into the Halo universe as a whole.

The actual Halo games are mostly kinesthetic shooting exercises that contain allusions to the larger Halo universe, which is mostly spelled out by comic books, novels, and easter eggs hidden within the Halo games. The live-action Halo commercial spots and the Forward Unto Dawn webseries also work to expand the world of Halo. They’re so successful because they tap into the darkness and desperation that sits underneath all the action.

The Steven Spielberg television series and Halo Nightfall are the latest in a line of life-action projects for the franchise. The first material was created by Neill Blomkamp, the director of District 9 and Elysium. In fact, this series of shorts edited together under the title Landfall brought Blomkamp to many peoples’ attention for the first time. After the short film, which shows human arms manufacturing, the meat of the story serves as a prelude to Halo 3.

Human troops fight off invading Covenant forces as they try to pinpoint where Master Chief, who is plummeting to Earth after the conclusion of Halo 2, is going to land. It’s a short film about grit and desperation.

Blomkamp’s shorts were the first demonstration of what the Halo universe could look like in live-action. The four-wheel drive Warthog vehicle featured heavily in Landfall was enough to make any Halo fan’s mouth water. We’d never seen anything like it before. The Marine armor, the human battle rifles, these are all iconic images from the Halo franchise. Everything about the Blomkamp shorts screamed, “Look at the potential for a Halo movie!”

The “Believe” ad campaign for Halo 3 was clean and crisp compared to Blomkamp’s rough-and-dirty footage, and rather than depicting combat, it took a retrospective approach from within the Halo universe. The first spot features an old combat veteran viewing a diorama commemorating the Battle of Mombasa in Kenya, which in the Halo fiction was one of the last battles to take place between the Covenant and the human forces of the UNSC, or United Nations Space Command.

It touches heavily on themes of finding lost hope, human sacrifice for the greater good, and something close to patriotism. The “Believe” ads do a wonderful job of demonstrating just how close humanity came to the brink, and the degree to which Master Chief was the only thing that saved us.

The next game in the franchise, Halo: ODST, didn’t feature a Spartan super-soldier as the hero. Orbital Drop Shock Troopers are the elite of the human UNSC forces. The story is about an ODST squad that lands in the occupied city of New Mombasa, on a mission to extract an intelligence asset.

No one speaks English in the short for the game, titled “We are ODST.” By setting the commercial in what sounds like an Eastern European nation, the spot reinforces that the human war against the Covenant is an “all-in” action. It’s “every man and woman on the firing line” stuff.

One of the many things to love about this short is the final sequence, in which we see the grown-up version of the ODST soldier heading back into the fight. That helps establish just how long the war with the Covenant has been happening.

The Birth of a Spartan short, which was an advertisement for Halo: Reach, the final Halo game produced by Bungie, the famed video game development studio that created the Halo franchise. The reins have since been passed to Microsoft’s 343 Studios, which was formed specifically to handle the development of future Halo games, and to manage the franchise rights.

In the short, the protagonist looks at a picture of his parents. Halo: Reach is about a series of soldiers who are part of the Spartan III super-soldier program. In the Halo fiction, most of the Spartan III’s were orphans who volunteered after the Covenant destroyed their home worlds. They gladly marched off on suicide missions behind enemy lines.


You can watch an extended version of this spot here.

There were two other live-action shorts produced for Halo: Reach. Remember Reach gives us our first look at what civilian life might look like in the Halo universe. I story only works if you understand in advance what the game is about—that the planet Reach gets obliterated—but in that context, the scenes create a sense of foreboding.

Note that the couple in the first scene are located in the town to which the soldiers are being dispatched. And when the mother tells her child that she’ll be back in a few days… no. She won’t. Remember Reach can be chilling if you consider that the Covenant is destroying entire colonies and killing billions of human beings, just like the people seen here.

Deliver Hope is about a pair of Spartan IIIs destroying a Covenant spaceship laying siege to a human city. Notably, the bomb carrier in the first half of the spot is a woman. The Halo series is filled with female rank-and-file combat soldiers, pilots, and women in military command positions.

This is the extended (and clearly superior) version. Deliver Hope also shows what the regular people in the Remember Reach short were in for.

All of these live-action spots culminated in the webseries Forward Unto Dawn, which was part of the lead-up to the release of Halo 4. The Halo universe has changed markedly in the newest game in the series. The war with the Covenant is over, and humanity begins to feel ascendant—and thus the game loses some of the urgency that made the Halo universe so compelling.

Forward Unto Dawn, however, is set in the very early days of the human-Covenant war. It’s a story about Thomas Lasky, a cadet at the UNSC’s Corbulo military academy. Lasky’s brother is an ODST fighting in a war against human colonists who are trying to break free from the authority of Earth. Lasky’s mother is a high ranking officer in the UNSC.

Lasky is unsure as to whether he ought to be in the military or not. The decision becomes moot when the Covenant attacks the academy, and Master Chief himself comes to the rescue. Forward Unto Dawn featured the first live-action appearance of the hero of the Halo franchise.
Here’s Part 1 of the series.

The remaining four parts are all available on YouTube. You can also watch the entire Forward Unto Dawn series through the Halo Waypoint app on an Xbox console.

The question, then, is at what point in the timeline will the two newest Halo live-action projects be set?

The Ridley Scott production will introduce a character from Halo 5: Guardians, but that doesn’t necessarily mean that the story will be during or after Halo 4, when the Halo universe made its big leap forward in the timeline. We have no idea about which time period Nightfall is set in.

We also know close to nothing about the Steven Spielberg television series. If it’s meant to run for multiple seasons, it stands to reason that the series could play into the current state of the Halo universe. That way it could remain tied to the Halo games as they move forward, but we’ll just have to wait and see.

It’s also reasonable, then, to imagine that Forward Unto Dawn may be the last time we see the old, Bungie-helmed Halo universe depicted in live-action, save for maybe flashback scenes in the new work.

Forward Unto Dawn, from that perspective, closes the circle on what have been a stunning series of live-action Halo productions that demonstrate the potential for video-game movies and shows. The new Halo live-action projects currently in production seem to be kicking off a second cycle of Halo series that will hopefully continue to raise the bar.