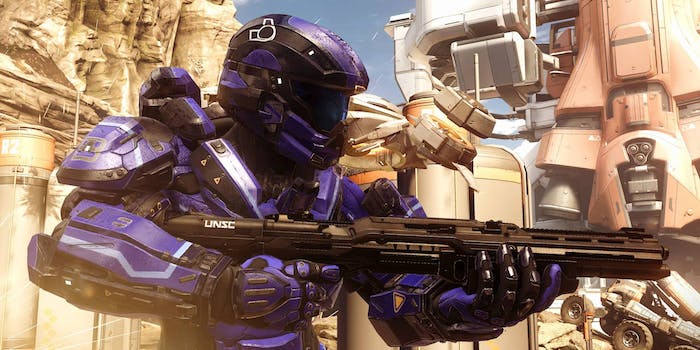 For the first time ever, a mainline series Halo game will be rated T for Teen with Halo 5: Guardians.

Halo 5: Guardians is one of the most anticipated games coming out this year, and it seems that the game will be available to a wider audience.

For the first time ever, a main series Halo game will receive a T for Teen rating. According to the ESRB, Halo 5 warrants a T rating for having blood, mild language, and violence.

Players use pistols, machine guns, grenade launchers, and futuristic weapons to kill alien and human enemies in frenetic combat. Battles are highlighted by realistic gunfire, explosions, and occasional blood-splatter effects. Characters can also use “assassinations” to kill characters by snapping their necks, or by stabbing them with bladed weapons. The word “a*s” appears in the dialogue, as well as occasional taunts/insults (e.g., “I have copulated…with your genetic progenitors!”; ‘Your father was a filthy colo and your mother was a hole in the wall!’).

We cropped together screengrabs from the ESRB showing all the past Halo games and its subsequent ratings. 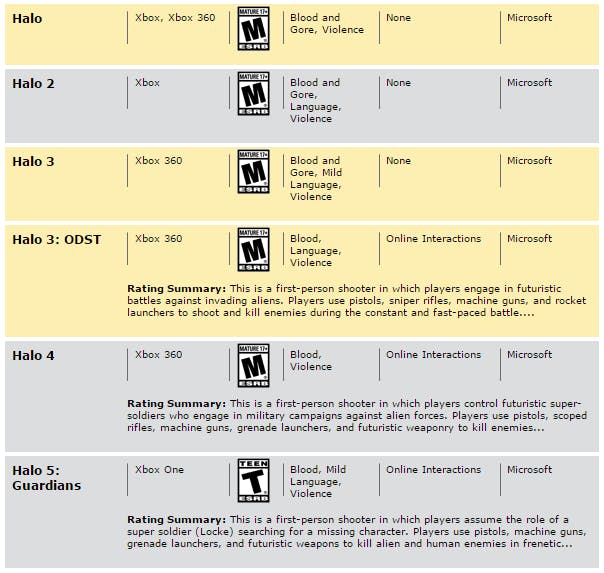 As you can see, all games mention blood, gore, violence, and except Halo 4, language. Why the rating change? It could have something to do with changing attitudes of what is acceptable levels of violence for those under the age of 17.

Halo 5: Guardians will be released Oct. 27 of this year.

Update 2pm CT, Aug. 12: A spokesman for the ESRB responded to the Daily Dot’s request for comment with this statement:

“No two games are exactly alike. ESRB weighs many different factors and combinations thereof when assigning rating information.  After carefully reviewing the submission materials for Halo 5, it was determined that the T (Teen) rating with content descriptors for Violence, Blood, and Mild Language, is most appropriate.  Halo 4 is rated M (Mature) with content descriptors for Blood and Violence. Rating summaries are available on esrb.org and the ESRB rating search app, which provide additional information about the content in both games.”