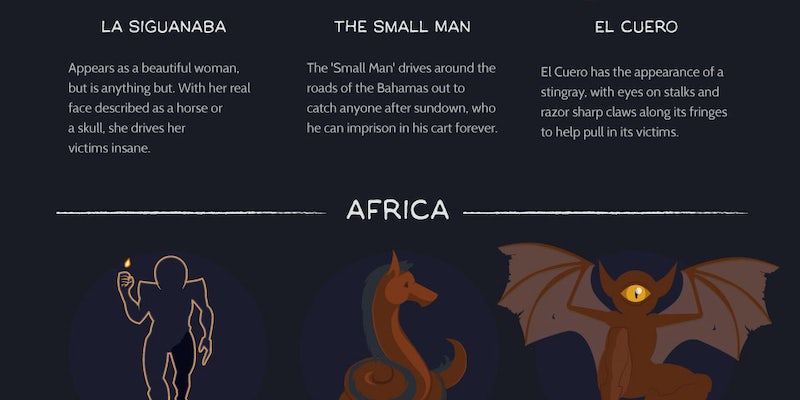 Infographic breaks down Halloween terrors from around the world

Some of these are scarier than any ghost or zombie.

As the final days of October loom, you’re probably ready to face the ghosts and goblins head-on. But what about the Metminwi, El Cuero, and a certain giant disembodied leg?

These are just a few of the terrifying myths from around the world that British costume-maker Morphsuits showcased in its latest infographic.

“As Halloween approaches and the nights get steadily spookier, we decided to look at terrifying legends from around the world,” Morphsuits’ Mark Porter told the Daily Dot in an email. “We looked at the Australian Yowie, the American Jersey Devil and even some Hairy Hands from England—scarier than they sound!”

You can say that again. Just look at some of these creepy-crawlies.

In addition to showcasing some of the scariest international Halloween threats, the infographic also helpfully tells us how we’ll meet our doom at the hands of these creatures. I don’t know about you, but I’m bored with brain-eating zombies and neck-biting vampires. Bring on the creature who traps you in his toy cart forever and the horse-snake that causes thunderstorms if you anger it.

My Halloween could definitely use a few more wendigos and krampuses, wouldn’t you agree?